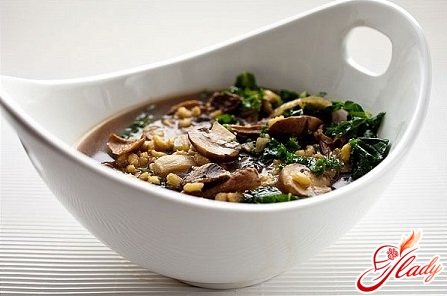 Rassolnik is considered a traditional Russian dishkitchen. The classic soup recipe in ancient times included kidneys, duck offal, less often the housewives used a domestic chicken. Today, broth is brewed from everything that is at hand: bones, tender beef, pork. In some cases, add sausages or, for example, sausages. If desired, you can make rassolnik with mushrooms and vegetables - this dish will certainly be to the liking of admirers of a healthy lifestyle. This is the final version right now and will be discussed. If interested, welcome to our library of recipes. We will teach you how to prepare a hearty aromatic soup.

If you want this "mushroom" recipe can be a littlechange. Thus, in the classical version, the pickle contains pickled mushrooms, but if necessary, use boldly or freshly. Soup is a hot dish that is perfect for a delicious family dinner on a day off. Arrange yourself and your family a small holiday - to look for this occasion is not necessary. Prepare mouth-watering meals and gather at a meal with children and a loved one, such pastime, as experts say, is a great opportunity to get closer to each other. Ingredients:

Cooking method: We offer to realize a quick and delicious recipe - first of all, cook beef broth. The latter, if desired, can be replaced with pork, and if you want to make a light and not too fat soup, we recommend buying a homemade chicken, duck or turkey. So, when the broth is ready - about 40-50 minutes after the beginning of cooking - get out of it a piece of meat (use it in another dish), and strain the liquid itself. Now cut medium mashed potatoes mushrooms, and peeled potatoes - small slabs. Then, heat the vegetable oil in a saucepan and fry the champignons in it until it is brownish-golden. When they get soft and start up the juice, enter the finely chopped celery, as well as the parsley root. Place the grated carrot, then remove the husks from the onion and cut it into cubes, brown together with the above ingredients. It's time for cucumbers: carefully cut off the skin from them, and cut the flesh into small pieces. Then pour all the warm water and put on a quiet fire - cook for about five to seven minutes. Remove excess liquid, and place cucumbers along with potatoes and roast in broth, which, incidentally, must first be filtered with a sieve. Now here also enter a well washed barley, a few pinch of salt and, if necessary, dried spices for flavor. Boil the soup on a very slow fire, about ten minutes before the end of the procedure, pour into it a previously boiled and filtered brine. Immediately before serving, distribute the dish on plates, decorate with chopped greens and pour sour cream. This recipe will appeal to lovers of light food. If your family is not used to do without meat, cook broth on it, and a piece of beef, chicken or pork, depending on what you use, add to the dish. It will turn out very tasty and satisfying, you'll see. And do not forget about the spices, because they give a unique flavor. For rassolnik suitable fragrant peppers, dried rosemary, basil, in extreme cases you can use parsley or dill. And one more thing: to make the croup cook faster, soak it in warm water, then rinse and send it to the broth. Rassolnik with spinach and celery

We offer to master one more incredibly appetizingvegetable recipe for the first dish. If the traditional rassolnik brewed from the kidneys and giblets, then we digress from the classical decisions and slightly "modernize" the dish - we will make broth from dried mushrooms. In principle, you can use any mushrooms at your discretion - pickled or fresh. And if you want to make the soup more satisfying, cook it with pork or beef. When finished, take out the meat, and cool the broth and add all the necessary products to it. Ingredients:

Cooking method: This recipe rassolnik good because it is inexpensive and versatile. In the warm season, soup can be cooked from fresh vegetables, but in winter, frozen parsley or dill, dried mushrooms will be useful in the winter. By the way, about mushrooms: for any lack of the specified grade, use any. It should be noted that it does not really matter if they are fresh or pickled. Well, now let's talk directly about the procedure for cooking hot food. So, first of all clean the roots of greenery, after a good rinse, dry with a paper towel and as small as possible chop. Onions cut into cubes of medium size, then both of the above ingredients, put in a saucepan with melted butter. Stew the vegetables under a tightly closed lid until they change color and soften. Meanwhile, transfer the dried mushrooms into a deep bowl and, filling them with cold water, leave to infuse for a couple of hours, then drain off excess liquid and dry. By the way, mushrooms can be prepared in another way. For example, take note of the following recipe: Drizzle the food in a little salted boiling water and cook for seven minutes - they should be half-ready. Then remove them with a noise, throwing in a colander, allow to drain, then fry in a pan with vegetables. Peel potatoes with a knife and cut into cubes of medium size. Put a small fire on the water when it starts to boil, put into a pan dried mushrooms and potatoes. To your taste, add salt, if desired, enter a few peas of sweet pepper and favorite seasonings. When the mushroom broth is ready, combine it with the boiled vegetables, finely chopped spinach, mix the dish thoroughly and keep it on the plate for another ten to fifteen minutes. While the dish is languishing, boil the concentrated brine, strain it through a sieve and cool a little. Salty cucumber cook in boiling water for two or three minutes. After pour the brine in the soup and put the green vegetables here. Still some time, hold the dish on a slow fire, then cool and pour over the plates. Sprinkle with finely chopped herbs and decorate with homemade sour cream. Soup with cucumbers, rice and mushrooms

Each recipe rassolnika - is separately takenCulinary history with its nuances and subtleties. As the practice of great masters shows, even a classic dish can be turned into something unique and unlike. It is enough only to replace one or two ingredients or, for example, add fragrant, exotic seasonings. Two variants of the mushroom pickle were suggested above: with dried and marinated mushrooms, with pearl barley and one potato. Everyone cooks soup at their own discretion, we, in turn, suggest to consider another recipe. This time, we will prepare an appetizing soup with rice and vegetables. Ingredients:

Cooking method: First, write down, remember and take note of the subtleties that will help cook the most delicious soup. So, in order not to waste time in vain and save precious minutes, we advise to pre-soak white rice in cold water. Whichever grain you use, follow this rule - the product is well-fed and ready quickly. Note also that in rassolnik with mushrooms it is recommended to add a slightly sweetish tomato paste, as sour sauce can spoil the dish. And finally: if you want the dish to be stored in the refrigerator as long as possible, before adding brine to the soup, the latter thoroughly boil and strain. Well, now you can safely go directly to the culinary procedure. Washed and peeled mushrooms soak in ice water for 60 minutes, in the meantime bring to a boil slightly salted water. While it is heated, remove the mushrooms from the film and chop them with lobules. Similarly, do with onions, carrots and potatoes - peel the vegetables and cut them into medium cubes. Petrushka chop with a knife as small as possible, after warming up the oil in the frying pan and pour the flour into it. Fry it to a bright golden hue. Then add onion, soft mushrooms, greens and other vegetables. Cover the dishes with a lid and put it out for a while. Potatoes together with washed rice pour into boiling water, salt at your discretion. If there is a desire, enter the condiments. Pickled cucumbers gently clean, cut into small pieces, and brine bring to a boil and strain. Now put the roast in the soup, roll the cucumbers, pour the salted concentrate, add the tomato paste and the rest of the ingredients. Bring to a boil, when all the products are soft, turn off the hotplate and let the soup infuse. Today there is a huge number of a variety of options rassolnika. Some make a dish with seafood - crab sticks, squid, - others add beans, beets, bacon and soy sauce. However, do not chase the fashion - you need to cook what you like. Do you prefer classics? Then you will like the traditional rassolnik with broth from giblets, but lovers of novelties, will surely appreciate the more original version of the soup. We have a suitable recipe for everyone.

Soup with lentils and arugula cabbage