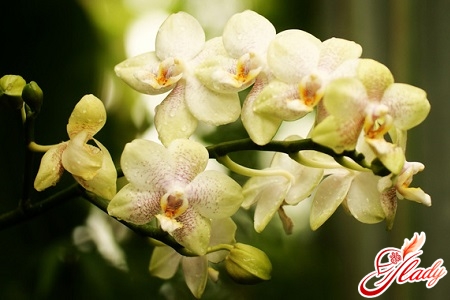 It is believed that the best time for reproductionthe orchid phalaenopsis is spring. During this period, the plant gradually emerges from sleep and begins to develop with renewed vigor. Most often, the reproduction of orchids occurs by dividing the parent plant into parts. Sometimes on peduncles of sleeping buds babies can appear, which eventually become independent plants. Any reproduction should be carried out only with the help of disinfected tools. Particular attention must be paid to the root system of the orchid, because every awkward movement leads to its damage. All places of sections must be disinfected and sprinkled with crushed coal. After transplant, phalaenopsis is kept in a bright, well ventilated area. The procedure will be successful only if the mother's orchid is absolutely healthy and is kept in the conditions necessary for it: enough light, heat and moisture. In the natural environment phalaenopsis reproduces by shoots that appear after flowering, and seeds. Distinctive feature of this plant is the absence of pseudobulbs, which allow to multiply phalaenopsis by means of a simple division of the rhizome. Therefore this orchid does not fit this method at all.

Reproduction of orchids with the help of seeds

Seed multiplication is complex and long-lastingA method that rarely ends successfully. Seeds of orchids are very small, more like dust. There is absolutely no nutrient tissue in them. If you decide to propagate phalaenopsis in this way, you need to select a nutrient medium for the seeds. In nature, this role is performed by the root sponge or special mushroom root, which supplies seeds with everything necessary for growth. Seeds germinate from 3 to 9 months, they need sterile conditions, which can only be achieved in a special laboratory. It takes about two years for a germ from the seed to prepare for a transplant. And that he became a full-fledged plant - will have to wait for four years. Considering that the planting of seeds has a masscomplexities, let's look at a simpler way - multiplication by sprouts. After the phalaenopsis orchid fades, the very period when she is ready to give the baby comes. High air temperature and high humidity will help awaken the sleeping kidneys, but is not at all a guarantor of this event. Sometimes babies on the peduncle reproduce without any effort, but more often the plant needs to be stimulated. If you are lucky, and your orchid has released the baby on the peduncle, leave it on the spot until the air roots appear. Once they reach a five-centimeter size and acquire leaflets, the process can be separated from the peduncle. It should be noted that the appearance and development of children can be detrimental to the mother plant, so during this period, phalaenopsis needs to be cautiously treated.

How to stimulate the appearance of children on the peduncle?

From the sleeping kidney neatly removed protectiveflake. To do this you need to be very careful not to injure the plant. Disclosed kidneys must be treated with a special cytokinin paste, which contains hormonal substances that promote the rapid development of offspring. If you can not remove the scales, you can wrap all the large buds with moist sphagnum and bind them with polyethylene, forming a similarity to the greenhouse on the peduncle. At this time Phalaenopsis needs a moist and warm atmosphere. After the shoots appear on the peduncle, polyethylene can be removed, but it is desirable to leave the moss before the appearance of the young shoots of the roots. To prepare a hormonal paste at home, you will need kinetin (10 milligrams) or benzamino purine. The selected preparation dissolves in 1 milliliter of water and is mixed with 1 gram of lanolin. The mixture is thoroughly mixed until a homogeneous emulsion of white color is obtained. If you treat the orchid kidney only once, you can activate the growth of the lateral peduncle, especially if the air temperature in the room is suitable: from 20 to 22 degrees. To prevent this from happening, Phalaenopsis should be placed in a room with a temperature of at least 28 degrees and, after 3-4 days, re-treatment of the kidneys. But even such conditions do not give a guarantee that instead of babe Phalaenopsis will not release a side flower stalk.

If the treatment of sleeping kidneys seems too much to youdifficult and time-consuming occupation, one can resort to another method of propagation of phalaenopsis orchids - propagation. After the flower stem has completely faded, it is cut off at the base and cut into several pieces so that in the middle of each cuttings there is a sleeping kidney. All sections of the sections must be carefully treated with wood or activated charcoal. Prepared cuttings are laid on wet moss, wrapped with a polyethylene film on top. For the cuttings to be successful, the temperature in the room should be 25-28 degrees, and the humidity should be above the norm. By the way, some especially successful flower growers propagate the phalaenopsis orchid as follows: cut the flower spike and put it in water with special fertilizers. In this case, the main thing is that the container with the appendage should be in a sufficiently illuminated and humid room. The chances for the development of sleeping buds are minimal. However, if you are lucky, you will get many new shoots at once. The phalaenopsis orchid can be multiplied and another way - the division of an adult plant. If the flower has a rather large rosette, you can cut off its top with a disinfected knife. The main thing is that it has several leaves and air roots. The cut is necessarily covered with charcoal. Then the upper stem is planted in a separate pot, and the lower part remains in its original place, where it later releases the lateral process. The stem will take root after a while and in a couple of years a full-fledged plant that can blossom will turn. How does the rooting take place?

Sometimes a baby on a mother plant does not wantto take root, and feeds on the account of an adult phalaenopsis. In order to reproduce in this case, it is enough to wait for the appearance of young leaves (3-4 pieces) and separate it from the peduncle. Places slices (and on the peduncle, and on the baby) sprinkled with crushed coal. It is also recommended to dry the outgrowth during the day. After that, it is planted in a substrate with a fine fraction and waiting for the appearance of roots. Do not worry if the lower pair of shoots leaves turn yellow - this is a normal phenomenon - the reproduction in any case should go well. Just do not remove the damaged leaves, with the appearance of the roots they will disappear themselves. Root the young phalaenopsis best in a small greenhouse, where the temperature is maintained from 22 to 25 degrees. The appearance of roots is a long process. Sometimes, in order to speed up the reproduction, hormonal preparations such as rootstones, heteroauxin or Hellin are used. They periodically spray the substrate, making sure that the drops of solution do not fall on the leaves. Otherwise, you run the risk of provoking leaf growth, and the development of the root system will take a long time. It is possible to stimulate young shoots to the appearance of roots in a completely innocuous way - to arrange them in close proximity to water. Take a plastic glass (better transparent) and a small piece of foam with a slotted hole. Fix the orchid's baby in the groove, pour water into the glass and dip an improvised raft with a scion. Cover with polyethylene. So you get a wet and warm environment in which the roots will appear very quickly. Once the root system is formed, the young plant can be transplanted into the soil. If we sum up all of the above, we can conclude that the reproduction of orchids at home is a complicated matter, but quite feasible. And looking at the amazing phalaenopsis flowers, you begin to understand that no difficulties will prevent you from achieving the desired result!

Room Mint. How to grow?

Christmas tree in the pot, how to care?