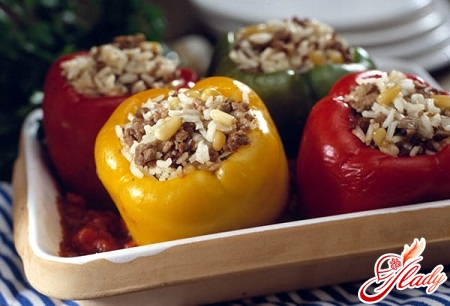 We offer to your attention recipes of two dishes: 15 bell peppers stuffed with meat, and 15 - stuffed with vegetables. The peculiarity of the second recipe is that 16 peppers are required for its preparation: 15 for stuffing, and 1 for frying. 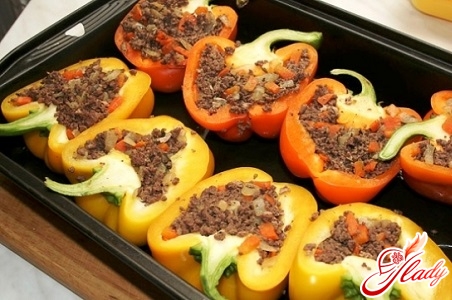 Meat (beef and pork) and Bulgarian peppersit is better to buy at the bazaar. In addition to the paired pulp of beef and pork, you need to buy some soup set, in general, bones for broth. But if you want the dish to get more dietary, you can replace the meat broth with vegetable. Vegetable broth can be prepared from onions, carrots, dill and parsley or use pepper broth (see below). Vegetables and greens for this recipe, too, it is desirable to buy "homemade", grown on someone's garden garden. The most delicious thing is this recipe "in season", that is, in July-August. Now that you have decided on the quality of the products, you can start cooking. Ingredients for the preparation of the recipe:

First you need to prepare a salted bonebroth and boil the rice in a separate saucepan, also after boiling. You can take any rice: a round, long, rice-cut. In ready-made rice porridge (it is better to slightly undercook it, but it is impossible to digest) add butter (preferably homemade) and stir well. Cool it down. While bones and rice are boiling, pour water into a large pot and put on fire for boiling. Mine all 15 Bulgarian peppers under running water. With a sharp little knife, we clean the middle, removing the seeds. Some housewives leave the "lids", then cover them with stuffed peppers during the extinguishing, but in this recipe "cover" is thrown out, as in the future instead of the "cover" will get a "hat" of vegetables. And while 15 cleared Bulgarian peppers we throw in a saucepan with boiling water for 2-3 minutes, so that they become slightly soft. Then we catch them with a noise and leave them in a large plate and saucepan to cool. Now we will deal with the stuffing. To cook the minced meat, scroll the meat through a meat grinder, add the boiled rice and bone broth. Stirring. Prepare a vegetable roast. Mine and shinkuem on grater carrots and onions. We spread them on a frying pan with boiling sunflower oil, we stir, salt. After a couple of minutes, add the tomatoes and greens finely chopped in electric shredding. And after a couple of minutes, add 2 cups of meat broth to the pan (instead of the meat broth, you can add a vegetable decoction left from cooking the peppers). Stirring. Using a teaspoon, pepper the Bulgarian peppers with minced meat and rice, gently put them in a wide pan and pour out the frying pan with the resulting vegetable frying. Stew on low fire for 30-40 minutes. Except for the time of extinguishing, the preparation of this dish takes half an hour. When serving each serving, sprinkle with sour cream. 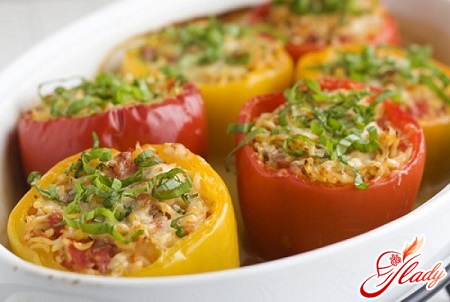 This recipe is good during fasting, it is also suitable for vegetarians. Ingredients for cooking:

Ribey-steak: a recipe with cooking options

Omelette with sausage: simple and hearty breakfast for everyone

Protein Omelette, cooked in the oven and steamed