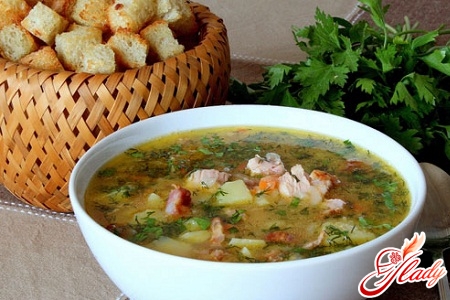 Pea soup. This habitual dish, it turns out, has a long history. His recipe is known to man since ancient times: in the second century BC on the streets of ancient Greek Athens sold pea soup (and bought, probably). So, this delicious soup was already incredibly popular even then. And the recipes for pea soup are hundreds and thousands, if not more. Today, no one can say exactly which cuisine is claiming authorship, what kind of people the soup recipe belongs to. It is prepared in almost all countries, and each nation has its own recipe. For example, the Italians in pea soup will add cheese and dry wine, in Mongolia it will be seasoned with sour cream and tomato juice, and in Ukraine at the end of cooking soup will put a pair of cloves of garlic and lard of lard. But, by the way, there is also a classic recipe, adopted by almost all kitchens - it is pea soup with smoked products. Probably, the combination of taste of peas and smoked meat all the same the most and the most successful. Here we will prepare such a popular soup. He and caloric content is not high, and the taste is beyond praise. By the way, if caloric content is not an empty phrase for you, remember that it is slightly increased by smoked meat. For preparation we need the following ingredients:

Preparation: The recipe for pea soup with smoked meats is simple, but requires some preliminary preparation. To begin with, we clean the vegetables, we'll wash the veal and soak the peas. Young housewives at this stage, as a rule, make a number of serious mistakes, which leads to a deplorable result. Peas in soup either turns into puree, or remains firm, which does not enter into our plans. So about soaking in more detail. Just before making soup, peas should be thoroughly washed at least five to seven times, otherwise the taste (and if not taste, then look) of our pea soup will be a nightmare. Let's leave it covered in water and forget about it, until when, according to our recipe, it's time to throw it into the pan. Pay attention, peas need to cook in the meat broth, which will get to us after the preparation of veal, and by this time it will just reach the required condition (swells as it should). So, peas are washed and filled with water, now it's time to cook meat. Cooking meat should be by the rules. Therefore, we put the meat in a saucepan and fill it with cold water. Experienced housewives strongly recommend for pea soup to take veal with a bone, because we will prepare a delicious soup. A pea soup will get much tastier, if the broth is cooked from meat on the bone. And the caloric value of veal is much less than that of the rest of the meat. In general, half the success in the preparation of pea soup depends on the tasty broth. Therefore, we will have to cook a delicious broth. Before you start cooking broth, you need to wash and clean the vegetables. Then you need to cut half a carrot and half a bulb into cubes. As soon as the water boils in the pan, fill it with cooked vegetables. Meat should be cooked with vegetables for about forty minutes, from time to time removing the formed foam. Penka needs to be removed necessarily, since it's not possible to make a tasty and beautiful pea soup with smoked meats without taking off the foam, the scraps of scale will be floating in it and spoil the whole kind of soup. Once the meat is ready, take it out and put it on a plate - it should cool down. It's time for peas to fall asleep in advance, soaked peas in a saucepan and cook broth with peas. Meanwhile, we separate the veal from the stone, cut into small squares and fill it in a pan with peas. The remaining carrots will be rubbed on a large grater and cut into smoked meat, in small cubes. Smoked pork ears are best for smoking, but if they are not, then you can use smoked bacon, bacon, pork rudder. The recipe for this soup allows even the use of smoked sausage. In other words, those products that have a smoked smell and taste will suit the soup. So, we continue to prepare our pea soup. Cut the smoked sausages on a hot frying pan, pre-filling it with oil (about one hundred grams). If you use smoked bacon, it will be much better if it is drowned to squash. If the recipe allows the use of sausage, then it must be roasted to a golden crust. While the smoked products are fried, cut the remaining onions into cubes. The technique of cutting is simple: to begin with, the bulb is cut in half, the resulting halves are cut across, centimeter strips, then these strips are cut into cubes. We continue to implement the recipe for pea soup with smoked products. While we were engaged in cutting onions, these same smoked products were fried, acquired a golden crust and are looking forward to their time. And now he (their hour) has come. We fall asleep in the onions roasted with smoked meat, mix, and once again roast the smoked products together with the onions. As soon as the onion turns golden, we put grated carrots in a frying pan, and extinguish all fifteen minutes. It is highly recommended to cook it a little earlier. While the frying comes to the standard, slice the potatoes and put it in a saucepan. The soup should be left for another ten minutes, after which we fill it with a roast and, after mixing it, we cook another ten minutes. Now cut the green onions, peel the garlic and cut the denticles with mugs. All this we fall asleep in the pan, there we put the laurel sheet. Stir and give the soup a few minutes. Then remove the soup from the fire, tightly cover the pan with a lid and let it brew. Everything, the recipe is tested in practice, and our culinary pea masterpiece is ready. As you can see, it is not difficult to cook at all. Bon Appetit! We advise you to read: