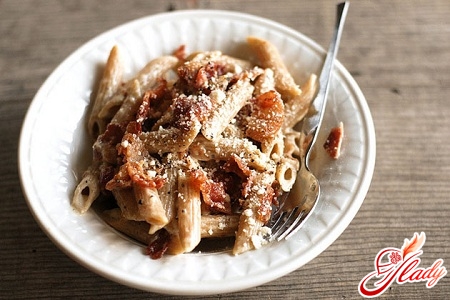 Italian food is slow, but true (and most importantly,successfully!) are prescribed in our Slavic-Asian cuisine. And probably over the next hundred years no one will remember that pizza and pasta came to us from Italy. However, such precedents have already taken place in the history of our cooking. Pelmeni, for example, has long been considered a genuine Russian dish, although they were given us this recipe by the Turkic-speaking peoples of Siberia, but about the fact that the Russian peasants Peter the First forcibly forced to plant potatoes, and they responded with potato riots, already somehow remember shame. But back to the Italian pasta. We got used to the pasta, but until now we could not fully experience the delights of this hearty dish. And the reason for this is our ignorance in the art of making sauces to pasta. But every sauce makes it special. Let's try to make pasta with ham and mushrooms in creamy sauce. And what? It is very Italian and at the same time it is quite usual for us. A recipe for this sauce is far from alone, and you can submit with it a completely different pasta: starting with traditional spaghetti and ending with exotic for us tagliatelle. So…

Spaghetti with ham and mushrooms in creamy sauce

Let's start, as agreed, with spaghetti. And try the recipe for spaghetti with a sauce cooked on the basis of cream and cream cheese. For its preparation we need the following ingredients:

Preparation: In advance mine and finely cut mushrooms, cut into small pieces of ham and chop the onions. Now we dissolve in the saucepan or in the brazier butter and first fry onion on it. Pay attention - onions are fried, but not letting. When the ray slightly blushes, put the ham into the saucepan and fry it all together. Lastly, we add mushrooms to the fry and first stew them in an open saucepan so that the water evaporates, and then fry until the mushrooms are browned. Now put the melted cheese into the frying pan, wait (stirring the sauce!) Until it disperse on fire, and pour it all with cream. We try to add salt and if necessary, salt. Let the sauce boil, cover the saucepan with a lid and simmer for about six minutes. Cooked spaghetti according to the rules is put in a brazier with sauce. Stir and serve for a meal. 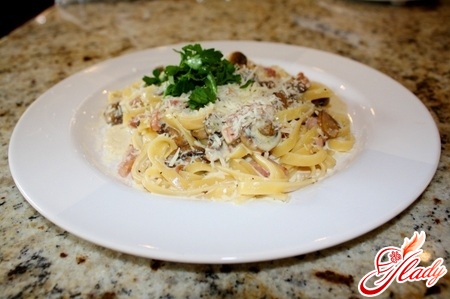 Spaghetti with cream sauce and bacon and parmesan cheese

Another recipe for all your favorite spaghetti. This time we are preparing a creamy sauce with bacon and mushrooms, with which we will serve our spaghetti. Ingredients:

Preparation: We prepare the mushrooms, washing them and cutting the plates, chopping onion and garlic, chop the bacon. We put a brazier on the fire and pour olive oil into it, and when it's hot, put bacon there and quickly (on high heat) fry it. We take bacon from the brazier, put it on a plate, put onion in butter and fry it to a light blush. Then add the mushrooms to the onions, fry them until the moisture evaporates, and pour out finely chopped garlic. Fry all together for another minute and pour the frying cream. Stirring sauce, stew it in an open brazier for a couple of minutes, and then put the spices and continue to stew until the sauce slightly thickens. Cover the lid and turn off the fire. Boil the spaghetti, and while they are boiling, beat the eggs with grated cheese. Ready pasta pour sauce, add to them bacon and whipped eggs. We serve hot.

Fettuccine with ham and mushrooms in creamy sauce

Do you know what fettuccini is? This is one of the most popular types of Roman pasta. It is in the capital of the fans of pasta that fettuccine is prepared most often - a wide thin noodle. And if in Italy itself, fettuccine is a recipe for everyday dishes, then abroad it is considered almost the most exquisite paste and even a symbol of good life in Italian, especially if you season the fettuccine with a delicious and tender sauce. Ingredients:

Preparation: First we prepare the sauce, because we have to put a freshly brewed pasta to the table, which we will cook later. So, for my sauce, mushrooms, cut them into small pieces and boil (five to ten minutes in a small amount of water). Finely chop and ham. Then in the saucepan we dissolve butter, salt, fry flour on it and pour cream there. Stir in the flour and cream, let the sauce boil and pour the mushrooms into it with the mushroom broth. We wait until the sauce boils again, and add the ham to it. Stirring sauce, stew it on low heat for about three to four minutes. Now boil the fettuccine, focusing on the time and the ratio of water and macaron indicated on the package. To make the pasta not stuck together, add vegetable oil to the water and immediately salt. With the ready fettuccine we drain the water, put the pasta on the dish (or serve it portion by part) and pour the cream sauce. On top, sprinkle the dish with cheese shavings and finely chopped greens. We offer you a recipe for Italian tagliatelle,which we prepare ourselves. And in the end we will get pasta with ham and mushrooms, dressed with cream sauce. Tagliatelli is another type of Italian noodles. By the way, on the recipe of this kind of pasta (according to legend, of course) the romantic Italian chef was inspired by the golden curls of Lucretia Borgia, the illegitimate daughter of the Pope (oh!) And the Duchess of Pesaro. But we'll try to make a very special tagliatelle - green. So, the recipe. For the test, we need the following ingredients:

Preparation: Mine fresh or unfrozen frozen spinach and boil it for one minute, then remove, squeeze and grind in a blender. Pour the flour into the bowl with a little pea, make a depression in the slide and break the eggs into it, pour the butter and put half a teaspoon of salt. We knead the dough with the hands until it becomes smooth and plastic. A third of the test is combined with spinach and once again thoroughly mixed. Both kinds of dough cover with a clean towel and let it be about half an hour. Then roll it into thin layers and leave it to dry. In the meantime, we are preparing the sauce. The recipe for its preparation is quite simple. Chopped mushrooms pour juice from half a lemon, ham cut into strips. In the brazier with hot oil fry very finely chopped garlic, add cream and broth there and weld the mixture to a thick sauce. Fry butter on mushrooms, add chopped parsley and ham to them and simmer for seven minutes on a small fire. In the end, put salt and ground black pepper (to your taste). Return to the test, turn it into a tight roll and cut the tagliatelle into smooth green and white stripes half a centimeter wide. Sprinkle the noodles with flour and leave a little more to dry. At this time we put a pan of water (four liters) on the fire, salt it and let the water boil. We dip the pasta in boiling water, cook for about seven minutes and drain the water. Boil the tagliatelle on a dish, pour the sauce and sprinkle with basil and cheese chips. Enjoy the taste of Italian pasta with mushrooms and ham. Improve your culinary skills, as perfection, as you know, there is no limit. Prepare the pasta, prepare sauces, just try to cook with pleasure. Enjoy your appetite and success in the culinary field! We advise you to read: