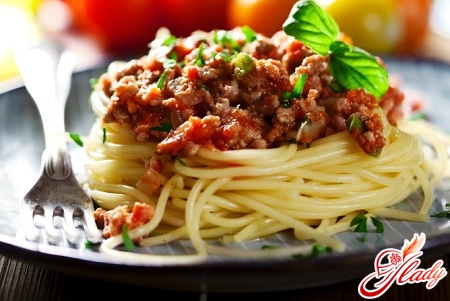 Italian cuisine is famous all over the world, and oneof the main dishes of this cuisine are spaghetti, or more usual for us name - pasta. These dough products in Italy have a common name - paste, which is actually in translation and means dough. They are cooked every day, and thanks to the rich imagination of the Italian hostesses, who invented a lot of sauces in their time, you can always cook a pasta with a new taste. A classic example of a typical Italian dish is pasta with bolognese sauce. It is not difficult to guess that the birthplace of this wonderful sauce is the city of Bologna, which, however, became famous not only for this, but also for the fact that the oldest university in Europe is Bologna. About Bologna, you can still tell a lot of interesting things, but we are not talking about history with geography, but about cooking, and therefore, we turn to recipes. But first a little about the secrets of cooking this dish. There are no minor points in this matter. Everything is important, from cutting vegetables (it should be very shallow), selecting meat and ending with the quenching temperature. So, in Bologna for the sauce take pork and beef, it will give him a more intense taste and aroma. To fry vegetables and minced meat should be on high heat, it is also necessary to carefully ensure that mincemeat does not form clumps, that is, during cooking it should be stirred all the time. Many people think a strange mixture of wine and milk. Here the sequence is important - first the milk (until completely absorbed), then the wine (they must also soak all the ingredients of the sauce). The last stage is the longest. Two hours is the minimum period, professional chefs usually extinguish the sauce for about 4 hours. Long, but the result is worth it. And now the recipe. 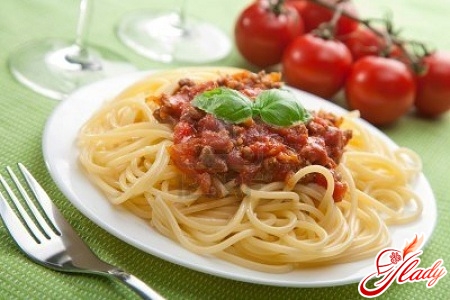 Cooking method: Carrots, onions, garlic, celery and pancetta (this Italian bacon) is cut very finely. In a deep saucepan, heat olive oil, add butter and fry all this beauty for about 7 minutes. Add the minced meat to the vegetables and continue frying over high heat, stirring and crushing all the time the mincemeat is trying to gather. It will take 7-10 minutes, too. Pour in the milk and cook until the mince completely absorbs it. The next step is to add wine and cook again, stirring until the sauce thickens. Now you need to add the mashed tomatoes along with the juice, herbs, salt and all other spices, mix well, cover and put on minimal fire, so that the sauce is slowly stewed. This process will take at least 2 hours. In the process, the sauce should be stirred and added with hot water if it becomes too thick. It remains to boil the pasta. If you want in Italian, then they should be slightly undercooked. Italians say - "al dente", which means "in the teeth." Inside, the macaroni is hard. Spread the pasta or any other pasta on the plates, pour hot sauce. Separately serve grated Parmesan. 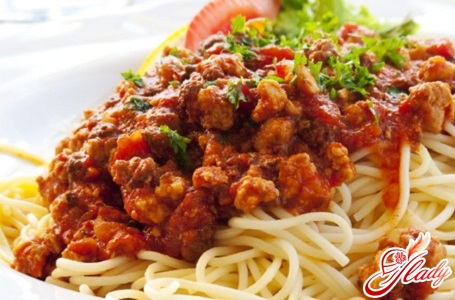 Cooking method: Onions, carrots, garlic and celery are finely chopped and fried in olive oil for 5-7 minutes. Add the mince and cook over low heat for 10 minutes. Pour the wine, bring to a boil, then add the mashed tomatoes along with the juice and bring to a boil again. Add salt and spices, cover the sauce with a lid and cook over medium heat until it becomes thick and almost uniform. Boil the pasta. Hot pasta is laid out on plates, poured hot sauce and sprinkle with grated Parmesan cheese. This is delicious! Note. If the sauce has turned out too much, it can be used on the next day, it will not get worse after warming up, some cooks and in general claim that it is only tastier when it is brewed. It is possible that our borsch, for example, on the second day after cooking, also has a more vivid taste than immediately after cooking. However, we are talking about sauce Bolognese. So you can even freeze it and use it in a critical situation, when you need to quickly and nutritionally feed the family or guests. Macaroni or spaghetti with Bolognese sauce have a lot of variations. Each housewife has her own secrets of cooking. You can also experiment with spices, meats, but the basic principles of cooking must be adhered to. Bon Appetit! We advise you to read:

Omelette for a couple: useful dishes should be delicious!

Omelette with ham and cheese: we cook the usual dish in a new way

Omelet in the oven: tender and airy eggs

Lush omelet: a great start to the day