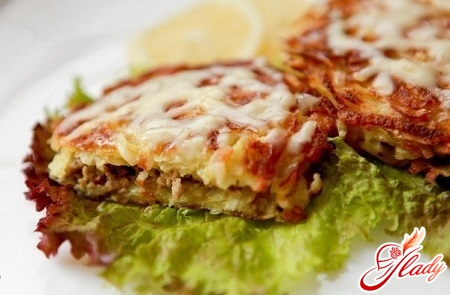 Draniki - delicious and satisfying dish for all occasionslife, which is also easy to prepare. They are presented in different cuisines of the peoples of the world, but they are most common in Polish, Lithuanian and Belarusian. Through Poland, the draniki also found their way to Russia (here they are called deruns), having become widespread. They are perfect for both the second dining dish and the festive table. There are a great variety of pancakes recipes: with vegetables, mushrooms, cheese, and pancakes with meat. The recipe can be found for every taste. Whichever recipe you choose, you can be sure: treats will please everyone, and if you show imagination and creativity, you will be surprised by its originality. And our recipes will help you with this. 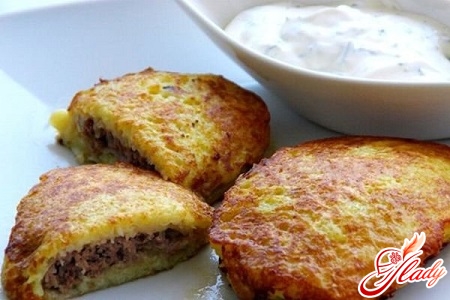 Simple recipes of pancakes with meat

Draniki (deruny) - is a kind of potatopancakes stuffed with minced meat. As a forcemeat any meat, but more often in the recipes used beef and pork. You can cook them in a hurry in a simple way, but you can choose a more elaborate recipe, which will take more time, but it will surprise with its originality. The choice of the recipe is yours. Before we begin to consider the recipes, let us note some common nuances in the preparation of the dish: raw potatoes must be washed, peeled, grated on a fine grater. Further, it is necessary to allow the potatoes to stand for a while until an excess liquid forms and drain it. In addition, running ahead, we note that the drake is always served with sour cream or sour cream sauce. The classic recipe for potatoes:

Seasonings: salt, black ground pepper to taste. Preparation: First, prepare the workpiece for the pancakes. To do this, it is necessary to prepare the potatoes as described above, add flour and eggs to it, and mix. Now we prepare the stuffing. You need to soak the milk roll. Meat, onion and roll roll through a meat grinder. Add to taste pepper, salt, egg and mix well. Allow the mass to stand in the cold for half an hour. Heat oil in a frying pan. Spoon out the potato paste as a pancake. Immediately top out the minced meat and again the potatoes. Fry until formed on both sides of a golden crust. Deruny in Minsk On the deruny:

How to cook: Prepare the potatoes, add to it oil and salt. Fry the usual pancakes. Prepare forcemeat. Pass meat through a meat grinder, add pepper and salt. To stir. Utjatnitsu or other heat-resistant dishes to grease with oil, put fritters, shift them with minced meat. Put in the oven and bake until done. 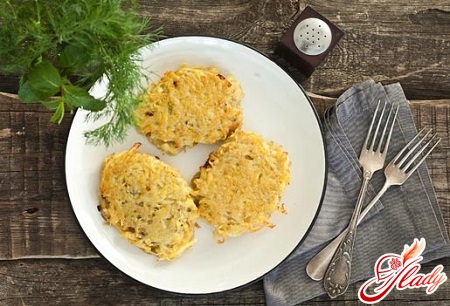 Deruns are often cooked with unusual fillings,combining minced meat with various other products: sausages, sausages and other smoked products, mushrooms, lard or cracklings. Get extremely tasty and original deruny. You can cook an unusual dish according to the recipes offered below. Draniki with roast Ingredients:

Preparation: Mix potatoes, kefir, egg, flour, salt, soda. Mix well. Heat the oil in a frying pan and fry the fritters on both sides. Prepare the frying pan. Pork finely chopped, cut onions into circles. Fry until ready to cook pork, add onions and salt at the end of the frying. It is necessary to make a fry in a separate frying pan. Potato pancakes in the miner way Products:

Seasonings: salt, black ground pepper to taste. Preparation: Potatoes, condiments, soda and flour to mix. Separately, pass through the meat grinder meat, add to the potatoes and mix. Onion finely chopped, add to the mass. Mix everything. Slice the fat. Form a spoonful of pancakes and fry on both sides on the fat. To serve to the table pancakes with bacon, on which they were roasting. Draniki with herbs and bacon Ingredients:

Seasonings: salt and any other to taste. Preparation: Chicken breast cut into small pieces, add seasonings and leave for 10 minutes. Cut the onion finely. Garlic crush. Mix potatoes and meat, add eggs, onion, garlic. Mix everything. Heat the vegetable oil in a frying pan. Spread the pancakes on it with a spoon and fry on both sides until a golden crust is formed. Potato pancakes with lard Ingredients:

Preparation: Prepare the potatoes, add the eggs, add salt and mix. Heat the oil in a frying pan. Put it in a spoonful of fritters and fry them on both sides until a crust is formed. Salo cut into small cubes and fry to melt fat. Cut the onions into half rings and put them to the fat. To fry. Top with potato fritters and simmer 15 minutes on a quiet fire. 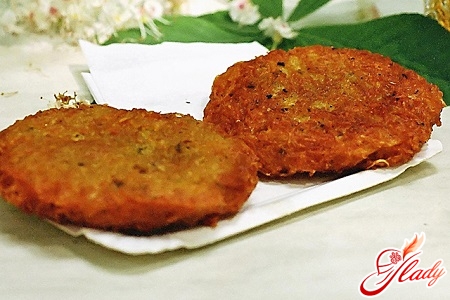 You can prepare a dish with a filling of meat and mushrooms according to the classic recipe, mixing mushrooms and minced meat, and you can choose a more unusual option. Draniki with smoked bacon and mushrooms Ingredients:

Preparation: Meat, onions and mushrooms cut into small cubes. Fry everything until golden brown. It is important to roast the components separately from each other. Salo, formed after frying the brisket, leave. Prepare the potatoes, add to it eggs, spices, greens and all fried ingredients. Put a spoonful of pancakes, each roll in flour and fry until a ruddy crust is formed. Prepare the sauce: chop the cucumber and greens finely, crush garlic, add sour cream and spices. All mix well. Serve separately or with sauce. 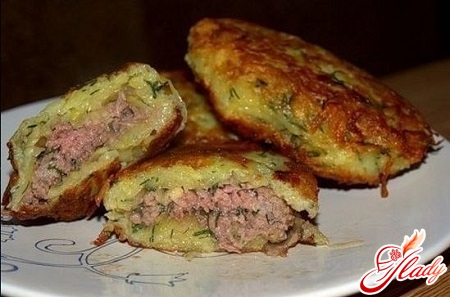 Recipes of potato pancakes baked in the oven

Spices: salt and any other to taste. How to cook: Grate potatoes. Eggs beat up, add to the potatoes, pour in flour, pour in milk, salt and spices. Mix. Garlic chopped. Grate the cheese on the grater. Cut the meat into pieces (like chops), each of them is well repulsed. Fry in vegetable oil on both sides. Then form the pancakes so that they are about the same size with the chops. Put them in a heat-resistant form or on a baking sheet, sprinkle with garlic. On top of the potatoes put the chops, pour sour cream, sprinkle with cheese. Bake in the oven until ruddy. Potato pancakes with meat in a pot. Ingredients:

Preparation: Prepare the potatoes, add to it flour, egg and spices. Mix well. Preheat the oil in a frying pan. Put the pancakes in it and fry until golden brown. Prepare the sauce. Cut the meat into small pieces and fry in vegetable oil. Cut the onion into half rings and add it to the meat when it is browned. Salt, add the pepper and fry until the onion turns golden. Then add sour cream and tomato paste. Stir, cover with a lid and simmer for about 5 minutes. Preheat the oven. Prepare pots: grease them with butter, you can also put a bit on the bottom. Lay out a layer of pancakes, pour them with sauce and repeat in this way all the layers until the pot is filled. Bake for 30 minutes, then take out the pots, allow them to cool and serve.

As a rule, the deruns are still moreeveryday food, but there are recipes that make this dish truly festive. You can cook them with meat and mushrooms, with smoked meats, or, as the recipe below suggests, with prunes. The dish, cooked according to this recipe, may well play a leading role on the festive table: it is very tasty and unusual. In addition, it will not go unnoticed due to the original pitch. You can be sure that this dish will decorate your festive table, and guests will be delighted. Potato pancakes in a pot with meat and prunes Ingredients:

Spices: salt and any other to taste. How to cook: Grate the potatoes, add flour, egg and salt to it. Mix well. Heat the oil and fry the pancakes on it, frying the mass from two sides. Cut off meat, cut into slices. Scald the prunes. Meat with prunes fry in butter. Then add the hot broth, salt, pepper and simmer until the liquid evaporates on a quiet fire. Onion cut into rings and fry in vegetable oil. Minutes for 15 before the end of meat quenching add a bow to it. Heat the oven. Take a heat-resistant pot (ideally clay), put in it a layer of pancakes, on top - a layer of meat, then repeat all layers identically until the pot is filled. Top with sour cream and put the stew at 140 degrees for half an hour.