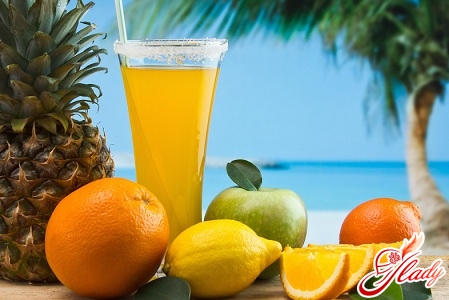 In the hot summer period nothing so quenchesthirst, like an orange drink. And if you invited guests, instead of the usual shop juice or, worse still, the Phantos, Coca Cola, Sprite and other sodas, you can put this delicious drink on the table. It does not contain preservatives, dyes, emulsifiers, it consists entirely of natural ingredients. To prepare a drink, it will take quite a bit of time, inexpensive products sold in each supermarket, and a recipe, which we gladly share.

Oranges are sold in stores all year round,so you can prepare a drink using this recipe at any time, regardless of what month it is outside the window. In the summer, when there is incredibly grueling heat, he will perfectly quench his thirst and give strength. In the autumn and winter, juice from oranges will help raise immunity, fill the body with useful vitamin C, and neither the flu nor respiratory viral infections will not be scary to you. Ingredients:

Cooking method: To begin with, wash the unpeeled oranges with water with boiling water, after a good wipe and send to the refrigerator for two hours, and if there is such an opportunity, it is best for the whole night. This procedure will help remove the bitterness from the fruit and get rid of the wax. After the specified time, cut them into large pieces and grind them with a meat grinder. Then the resulting mass pour boiled, but necessarily pre-chilled, water (three liters will be needed) and leave to infuse for 10 minutes. Now, to leave large particles, you must first strain the nectar through a colander, and then through a sieve or a regular piece of gauze folded several times. The latter method is not very effective and should be used only in extreme cases (for example, if you do not have suitable utensils), since the pulp will instantly clog holes in the tissues, and the juice will be difficult to strain. In addition, the drink can get unnecessary strings. When you cope with the task, the resulting juice diluted with water (six liters), then pour out the sugar and the amount of citric acid in the recipe. Thoroughly mix the mixture with a spoon and leave it for 60 minutes. Then pour out the orange drink over clean bottles that should be stored in the refrigerator. This simple recipe will help to prepare a sweet, full of vitamins natural juice. Now, even in the forty-degree heat of thirst, you will not be afraid. In addition, from the pulp remaining after percolation, you can cook an appetizing jam. To do this, add sugar to the fruit mass, a little citric acid and put on a quiet fire. Cook with constant stirring until the mixture slightly thickens. Then spread it over the cans, pre-sterilized, and store in a pantry or in the refrigerator. This jam turns more like a jelly. It will make the perfect company green or black tea and will give a charge of good mood on winter evenings.

Drink from fresh oranges with cinnamon

Today, most people to quench their thirst,buy carbonated drinks or supposedly natural juices, which in fact contain a huge amount of harmful to the human body ingredients. In some cases, this can lead to various disorders of the gastrointestinal tract, raising acetone in the urine. If you care about your health, eat right and limit the consumption of not very useful products. The recipe for this drink will help in the struggle for excellence and good mood. Ingredients:

Cooking method: This recipe, although similar to the previous one, but thanks to cinnamon, the drink has an original taste and unusual aroma, which attracts everyone who wants to quench your thirst. So, start with the simplest: wash oranges, cut them in half and squeeze out the juice. If you have a special device, then it is better to use it - so not a single extra drop of fruit nectar will be lost. After pour in a deep saucepan of water, then pour out the sugar and cinnamon here. The rest of the skin is crushed with a knife and added to the rest of the ingredients. Now make a small flame of the burner and cook the mixture, stirring occasionally, about fifteen minutes from the moment of boiling. Finished the fruit broth strain through gauze and mix with freshly squeezed juice. The resulting beverage can be served both hot and cold. If you do not like oranges, change the recipe slightly for yourself - take the mandarins instead of the above fruits. The technology of preparation in this case is exactly the same. Considering that one drink will need one orange, 250 milliliters of water and 50 grams of sugar, you can easily calculate the required quantity of products for a large company.

Drink "Orange Blast" is perfectfor a festive table. The notes of carnations, cinnamon and nutmeg give it a truly unforgettable taste and aroma. Surprise and delight guests with their culinary skills. In addition, the preparation of the drink does not take much time, besides the necessary products are affordable and inexpensive. Ingredients:

Cooking method: Oranges cut into several pieces and squeeze out the juice into deep dishes. Now the resulting nectar is diluted with boiled chilled water, pour out the specified amount of sugar in the recipe, lay out cinnamon, as well as cloves. Put the pan on the stove. First you need to make a strong fire, and as soon as the first bubbles begin to appear on the surface of the fruit drink, reduce the flame to a minimum and, after holding for about a minute, remove the dishes from the plate. The process of cooking the juice is similar to the preparation of natural coffee: it hardly boils, only a "hat" is formed, as soon as the burner is turned off. So you will need to do the same. At the very end do not forget to get a stick of cinnamon and buds of a carnation. Now go to the next stage: mix the prepared mixture, when it is slightly cool, strain through a fine sieve. If you do not have one, use the usual gauze, just fold it five to six times. The received drink pour on glasses and immediately before serving sprinkle with nutmeg. We hope that you will like this recipe and will gladden your loved ones from time to time. "Orange blast" is similar to non-alcoholic fruit mulled wine with sour-sweet taste and invigorating effect. Bon Appetit!

If you decide to get together with your girlfriends and arrangewe offer to replace traditional in such cases champagne and wine with an appetizing refreshing fruit drink made from oranges. Especially since his recipe is quite simple, so you do not have to mess around in the kitchen for long. Several glasses of delicious liquid and a great mood for everyone! Ingredients:

Cooking method: To make a drink, you do not need to have a special culinary talent - it's enough to act strictly according to the prescription. Are you ready to begin? In this case, pour a glass of boiled cold water and liquor into the orange juice, then pour out the sugar and a little citric acid. Very carefully mix the resulting mixture several times, then add the liquor again. Ready to send the drink to the refrigerator, and when he is infused, spread the beautiful glasses of food ice and pour an orange cocktail in them. The case for small - decorate the creation. To do this, cut the orange slices with medium slices and attach it to the edges of the glasses, then sprinkle everything with sugar powder, cinnamon and lay out the leaves of fresh mint. We are sure that your friends will be delighted with such a drink! 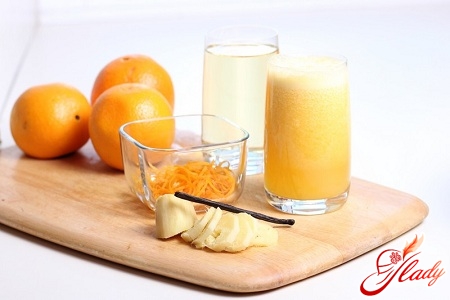 Not every child loves milk, although this isuseful and necessary for a young growing body product. If your baby flatly refuses to drink it, use a little trick. Invite the crumb to taste a delicious orange cocktail, which is unlikely to leave him indifferent. Ingredients:

Cooking method: Pour the milk into the blender bowl and add the syrup to it, after whisking it thoroughly. To do this, you can also use a mixer or kitchen whisk - the effect will be almost the same. Ready beverage, pour into a tall glass beaker and sprinkle with chocolate, grated on a fine grater. As an ornament, you can also take mint leaves or nuts, which must first be crushed. The recipe for this drink can be slightly changed: use fresh fruit instead of the ready-made orange syrup bought in the store. Just squeeze out the juice from them and mix it with the milk. So it will be much more useful!

Finally, we offer one more quick recipe for the drink. To make it, you just need to mix the three components. Ingredients:

Cooking method: In advance, we stipulate that we used ready-made juice in tetrapacks, which is sold in all stores. However, if desired, you can replace it with fresh oranges - squeeze out of them 80 milliliters of nectar. Then, the resulting liquid is combined with sugar syrup and, pouring on glasses, add lemonade to each portion in your choice. Decorate with a cocktail of fresh fruit or a cherry. By the way, if you could not buy sugar syrup, do it yourself. It's very simple: take 30 grams of sugar for 30 milliliters of water and cook the mixture on low heat. Oranges should be consumed both for adults and children, because they contain more than 100% of the daily norm of ascorbic acid. So prepare the fruit drinks yourself and stay healthy! We advise you to read:

How to make coffee in the coffee machine correctly?

How to brew coffee in a Turk so as to get a tasty and fragrant drink?

Kissel from starch: basic rules and recipes for cooking

Kissel from the oatmeal: a recipe for a healthy dish