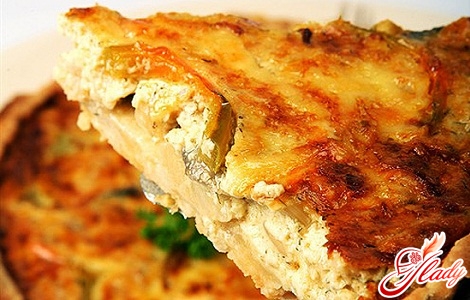 There are many recipes for cookingonion pie. The most common is undoubtedly the onion pie recipe from the short-dough. For the filling is used both onions and leeks. We offer several different recipes for cooking onion pie, and which one to choose for you.

Cooking method: How to cook onion pie? To do this, mix flour, salt and butter in a bowl. Then add the sour cream and knead the dough until it stops sticking to the sides of the bowl. Ready dough rolled into a circle shape and put into the refrigerator for 3 hours. After that, already chilled dough is divided into 2 parts, roll out and put one cake in a mold, greased with vegetable oil and slightly bend the edges. Peel onion and cut into thin rings, combine with salt, pepper, sugar and fry in a frying pan in butter. Once the onion is soft it must be removed from the fire. Eggs, sour cream, ½ tsp of salt, pepper and fried onion to mix, and then put the resulting filling on the dough. Top cover with a second cake. The form is put in the oven for half an hour. Bake at a temperature of 180 degrees. Onion pie - ready!

Cooking method: The dough for onion pie with melted cheese is prepared as follows: for this purpose, flour, salt, soda and butter must be mixed in a bowl. Then add the sour cream and knead the dough until it stops sticking to the sides of the bowl. In a frying pan, with the addition of vegetable oil, fry the chopped onion, remove from heat, then add to it melted cheese and raw eggs, mix thoroughly. The cooled dough is divided into three identical parts. The first layer roll out and put in greased with vegetable oil form. From the second part, form the sides, lay the cheese-onion filling, and the third part roll out and cover the filling from above. Form the oven in a preheated to 180 degree oven and bake for half an hour. Onion pie with melted cheese - ready! Bon Appetit!

Cooking method: Flour and oil until fine crumbs are formed. Then add 2 tbsp. Spoon the water and knead until the dough becomes homogeneous. After this, the resulting ball of dough is put into the refrigerator for half an hour. To make the filling in a large saucepan, melt the butter, send the chopped leek, then a little water. Cover the frying pan with a lid and put it out for 10 minutes. Stir fried onions with sour cream, mustard, grated cheese, raw eggs. Dough roll out, put in a greased baking dish, bend the sides and pour the filling, pepper, salt to taste. Then the form should be placed in a preheated oven to 180 degrees and baked for half an hour. Open onion pie - ready! Bon Appetit! We advise you to read:

Pizza in aerogrill: recipe in your piggy bank