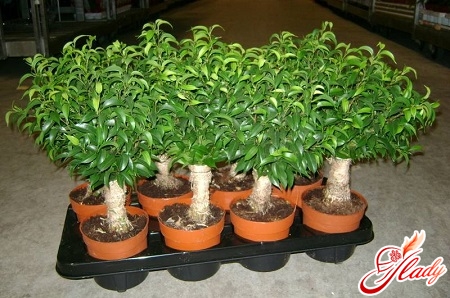 According to one of the philosophical teachings of Feng Shui,Ficus accumulates positive energy in the house and maintains the warmth and well-being of the family hearth. Caring for the flower, you will feel that the ficus has a positive effect on the emotional atmosphere in your home. And it may happen that acquaintances who see such a handsome man will ask you to share the sprouts. But how the ficus reproduces at home, we will tell you in this article. There are several ways to multiply the ficus - vegetative (cuttings and cuttings), seed and cloning. Micropropagation by cloning is performed in industrial production and represents an identical reproduction in the flask or test tube of the plant cell of the ficus. There are a number of advantages of this reproduction, but for fans-growers this method is not available. And since we are interested in the reproduction of fig trees primarily at home, we will dwell in more detail on vegetative methods and seed reproduction. 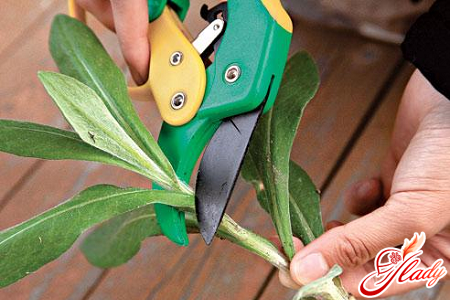 Keep in mind, the seeds of the ficus get in the homeconditions is impossible. For the process of seed formation, insect pollinators are needed, and unfortunately, or fortunately, they are not in apartments. Therefore, you will have to buy ready seeds in garden stores. Sowing the ficus is recommended from February to July, but the most favorable period falls on time from mid-February to April. By the autumn your seeds should be in time to ascend, germinate and grow stronger, and then they will have to be transplanted into separate pots. Before you plant seeds in the soil, they must be soaked in a growth stimulant. Landing is done superficially not deeper than half a centimeter with an interval of one and a half to two centimeters. If you are dealing with pulverized seeds, pre-mix them with ordinary sand for ease of planting, and then add this mixture to the ground. The substrate for seeding is required to be moist, light and air-permeable. To give these qualities, it must necessarily consist of sand, peat and leaf land. After planting the seeds, it is necessary to moisten the soil and cover it with film or glass, and the best option is to place the pot with planted seeds in a mini-greenhouse. Just do not forget to take a film every day for a while - so that the air is ventilated under it and to prevent accumulation of excessive moisture. For the successful germination of seeds, you will have to maintain the air temperature in the range of 25-30 ° C, and for full and qualitative development of sprouts, it is necessary to provide intense diffuse light. In this case, direct sunlight is contraindicated. Keep in mind, there are varieties of ficuses, the seeds of which germinate only in complete darkness. If you were lucky enough to become the owner of such a variety, then in this case a container with planted seeds should be covered with thick paper, which will prevent light from entering the soil. Germination of seeds will depend on the type of ficus. This process can last from ten to fifty days. And then you need to have patience. Seedlings grow slowly, and the first leaf, reminiscent of its outlines ficus, will appear forty-forty-five days after germination. Further transplantation into individual pots should be performed no sooner than three months later, with the appearance of three to four leaflets on the shoot. When transplanting the ficus, place the shoots so that the root neck is immersed in the ground at the same level. 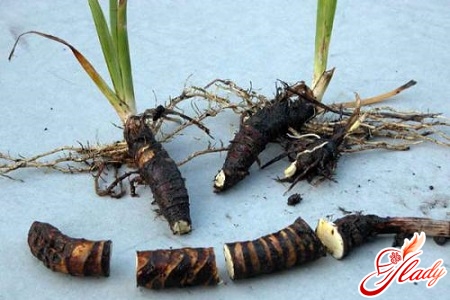 The vegetative reproduction of the fig tree can be madewith the help of cuttings or air and horizontal layers. Most species of ficus reproduce precisely by cuttings. Let us consider this process in more detail. Reproduction by cuttings For the successful rooting of cuttings, an air temperature of at least + 25 ° C and plenty of sunlight are necessary. Therefore, the favorable time for propagation by cuttings will be the spring-summer period. To this end, not yet lignified apex of the ficus with the existing leaves at an altitude of ten to fifteen centimeters cut off at an oblique angle with a blade or a sharp knife. You can not use scissors or pruners, because these tools compress and, as it were, split the stem, and it is extremely important for us that the fabrics are not deformed at the cut. This will greatly slow the growth of new roots. Large leaves on cuttings should be cut halfway or twisted into a tube. In this way, we slow the evaporation of moisture. To prevent rotting of the cuttings when placed in water, the lower leaves should be cut entirely. Before placing the cutting in the water, carefully clean the cut from the "milk" that stands out. The fact is that this protective juice quickly freezes in the air and does not allow growing new roots. Rinse the cut with running water or leave the stalk in the jar for one or two hours, then dry it thoroughly after soaking. For further rooting, the stalk is placed in a warm place in warm water, avoiding direct sunlight. Remember: the leaves should not touch the water, and in order to prevent rotting of the cuttings, activated charcoal should be added to the vessel. For successful rooting, the air humidity should be kept at least 80% and after two to four weeks after the appearance of the roots the cuttings should be transplanted into a light substrate. Another technique, when the ficus propagates by cuttings, is to plant it directly into a loose substrate. To do this, it is also necessary to rinse the slice from the milky juice, dry it and sprinkle the cut with charcoal powder. The stalk is placed in the ground and placed under a package or jar in a bright place. The appearance of new leaves will be evidence of successful rooting. In addition, as the cuttings can be used not only the top of the ficus, but also cut off from both sides pieces of stems with a leaf in the middle of the shoot. In this case, the upper cut is made directly under the kidney, and the lower cut is made along the oblique, taking most of the internode, which is immersed after treatment in the ground. Sheet at the same time should be twisted into a tube, and put the pot in a periodically ventilated mini-greenhouse (under a glass cap or polyethylene). The formation of roots and the appearance of new leaves will take three to four weeks. For good rooting, it is recommended, depending on the thickness of the cut, to make a cross-cut, split or scratches. The larger the area of ​​"injury", the greater will be the "corn", on which the roots develop over time. Also, to increase the chances of root germination, it is necessary to soak the cuttings in the rooting stimulator before planting for a day. Or, before planting in the ground, sprinkle the slice with the stimulant powder. I must say that the process of rooting in the water is easier to control, because when planting the cuttings in the ground it's impossible to notice decay in time. Propagation by tree branches of tree ficuses This method of propagation of ficuses is not very difficult and allows you to get a ready-made ficus of medium size. To do this, on the chosen not too large runaway, the trunk is stripped - about centimeters by ten to fifteen - and two transverse and one longitudinal incisions are made. This place is wetted or sprinkled with a rooting stimulant and wrapped with moss-sphagnum or a ready-made substrate, and covered with a transparent plastic bag on top. Some ficus enthusiasts manage to fix in this place a small cut pot. It is necessary to monitor the level of moisture in the soil and to check for the formation of new roots. After one and a half to two months, the rooted larvae are cut off in the lower segment and transplanted into a separate pot. In some cases, instead of annular stripping, an oblique incision is made, into which a chip is inserted. And then they proceed in the same way: the cut is treated with a root solution and wrapped with the necessary substrate. Propagation by horizontal layers of ground cover ficuses As a rule, in the soil-covering ficuses along the entire length of the trunk, additional roots are formed, which facilitates the reproduction process. So, on the selected part of the branch, the leaves are removed and tilted with an arch to a stand-alone pot so that the desired part of the trunk easily touches the ground. The place of joining is sprinkled with earth and fixed until the appearance of well-developed roots. Then, the strips are cut from the main plant. All these methods of reproduction of the ficus are fairly simple and do not require special preparation. However, it is not always possible to immediately obtain the desired result. Do not despair, try not to manage one cut or a layer, plant several specimens at a time. The more cuttings you prepare for reproduction, the more likely it is that you will get a healthy ficus with well-developed roots. And for the love and care for him, the flower will respond by creating emotional well-being and a pleasant atmosphere in your home.

How to make an alpine slide, rock garden