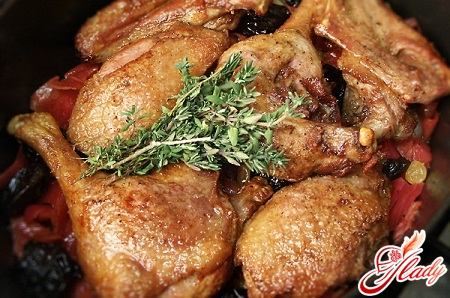 I want to suggest two ways how to cookduck slices. For those who have problems with the gastrointestinal tract, and for everyone else. On holidays, especially on New Year's Eve and Christmas, fried duck is a classic dish, but it is not suitable for everyone. When preparing a steamed dish, it turns out to be as delicious as the traditional method of cooking with frying, and even "peanuts" can eat it. Duck pieces can also be cooked in foil, in the oven or in a fashionable multivark now. For cooking both dishes, taking into account the fact that the meat is pre-marinated, it takes 3 hours. To prepare the dish you will need:

The pieces of meat are best cut from duck thighsand breasts. There it is more lean. Then it is cut across the fibers - the pieces should be the size of ¼ of the palm - and lightly beat. Next, rub each piece with a mixture of salt and fragrant pepper, which must first be ground or bought already ready for use. Fold the prepared semi-finished products tightly in a container, cut with a chopped apple - do not need to clean the skin with an apple, or with orange slices - the film on each lobule should be torn, Marinated meat in apples or an orange for 1-2 hours. At this time, the container must be cleaned in the refrigerator, covered with food film. Salt and pepper are put on the eye. Their number depends on how many serving portions the dish is designed for. As food is dietary, it is not worth using these spices. After the pieces of the duck are stuck, all the ingredients that were used to taste the dietary dish are removed. The meat is placed on the steamer basket and the regulator is set for 1 hour. If, at the right time, the duck's pieces are not soft enough - the bird turned out to be slightly older in age than expected - they can be turned over and add 10-20 minutes to make the dish "come down". The orange for the marinade is chosen by those who love meat in a mess, the apple - who prefers the sour taste. You can serve this dish apple or orange sauce, which was prepared taking into account the fact that the dish is diet. Preparation of fruit sauces With a whole orange rub zest - the topmost layer, the orange itself squeezed, getting juice. Stir in the peel, add a little salt, fragrant pepper and put on fire. To prepare the sauce - evaporation of the liquid - just 5-7 minutes. For a greater viscosity of the sauce during evaporation, a piece of duck fat can be added. Prepare apple sauce for poultry meat is even easier. You need half a kilo of sliced ​​apples without peel and pits to put on fire, add half a cup of water and a spoonful of lemon juice, sugar and salt to taste. Stew until thick. 5-7 minutes, and the sauce is completely ready. 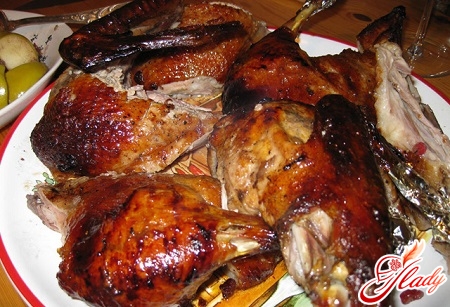 Very tasty if you cookdishes use foil, wrapped in her pieces of a bird. This dish can be cooked both in the oven and in the multivark. The duck is cut into pieces, removing the insides, carefully washed and marinated in spices. As necessary spices apply:

The use of other condiments may suggest a taste and fantasy. It is worth thinking about:

If the duck is baked with apples, nutmeg withcloves will be enough. All other seasonings are designed for the fact that pieces of duck will be baked with onions. Onions can be pre-marinated in vinegar, and you can take fresh and cut into rings. Apples are cut into large slices, the peel is not cleaned. The core with bones is removed. For 1 bird, 2-3 medium sized apples with sourness are enough. The Simirenko variety or winter apples are well suited. Sliced ​​and washed pieces are laid out in a dish with the right set of spices, onions or apples, everything is covered with a film and left for 1-2 hours in a cold place. Then the marinated pieces are neatly sorted into pairs. Those in which the meat is lean, are combined with the greasy ones. For example, the wing and back, thigh and breast. In the foil is also laid out on a pair of apple slices or chopped onion from a container in which a duck was pickled. Wrap the foil carefully so that the juice does not drain during the preparation. Then carefully wrapped convolutions spread on a sheet in 1 layer or in a bowl multivarka - it is allowed to lay in 2 layers. The baking time is about 1.5 hours. The oven is heated up to 170-180 degrees, the multivarker sets the mode "Baking" or "Frying". In modern multivarkas it is called in different ways. You need to orient yourself this way - this function is set for baking. Usually one and a half hours is enough to bring the dish to the ready, but in case of doubt, the softness of the meat can be checked during cooking. Do not expand the foil. It is enough to pierce the parcel with a toothpick. If it easily enters the piece, the meat is ready. From the oven you need to get the rolls right after the cooking is finished, so that the duck does not wither. In the multivark, they can lie on the "Heating" mode until the feed to the table. Lay out the pieces on plates directly in the foil, without turning around, so that the most delicious, gravy, did not flow out. The duck, cooked in pieces, is cooked much faster than the whole, and it is very convenient to serve. Do not have to mess with the hot bird, trying to divide it into portions and trying not to get dirty. And the taste of this dish is not inferior to the taste of traditional duck with apples.

Omelet with broccoli: a recipe for adherents of a healthy diet