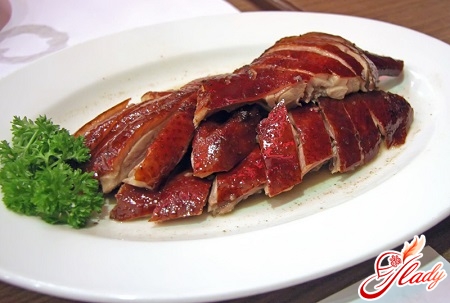 The roast duck has always been considered a festive dishand very refined. The main decoration of the Christmas table is a duck. And any other festive feast this dish will make chic, exquisite and unique. How to choose and cook this bird? What are the features and are there any specific tricks in this seemingly simple process? 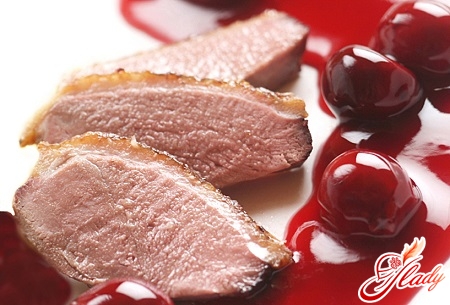 How to choose a duck?

Depending on where it will be boughtbird carcass, the features of choice depend. Of course, if duck meat is bought in a supermarket, then the question is only in the desired size and weight of the duck. The bigger and heavier the carcass, the more fatty the finished bird will be. Also, when buying a packaged duck in a store, you should pay attention to whether it is sold with giblets or without. Dutch or Polish imported carcasses usually have inside the enclosed bag with giblets, which is very advantageous and convenient, since they can be used to make broth or other dishes. Much more complicated are the features of choosing a duck on the market. Here you need to have certain knowledge, so that the bought bird was quality and tasty in the end. Fresh duck carcass should have a yellowish tint and a well-marked fatty layer. Determine fatness is possible by the amount of fat under the tail. A too fatty duck during preparation will have an unpleasant aftertaste, and therefore it is better to choose not too thick a bird, but also not thin, which can be stiff and dryish. The skin should be thick and not sticky, and the meat on the cut, unlike chicken, should have a bright red color. Another important point when choosing a bird - pay attention to the proportions of the carcass. The length of the feet has a value. If they are disproportionately short in relation to the trunk, then this duck during the cultivation was stuffed with hormones and, accordingly, the meat can be given off with a taste of medicines when cooking. And in terms of its composition, such meat is hardly useful for the body. Well, and, of course, the carcass is just a sniff. The smell should in no case be musty or sour. If gives acid, then the carcass was soaked, tk. the bird was sick or the meat was already beginning to deteriorate. All these simple knowledge of the features of choice will help to acquire a healthy and fresh duck carcass. 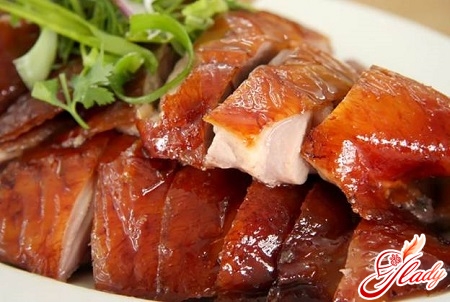 So, the duck is bought, now it is necessary correctlyit should be processed and prepared for frying in a frying pan. There are several distinctive features. Unlike a chicken, the duck is more difficult to prepare, since it is initially fatter and tougher and moreover has a very specific strong odor. To begin with, the carcass is recommended to burn. The feathers of the duck are stiff and the hemp from them almost always remain. So, not being lazy once again burn the bird over the fire, you can make the duck skin smooth and soft, which, naturally, will affect the taste of the final dish. When cutting it is recommended to cut and remove the duck goose. It has a very strong smell when cooking, which is not something everyone likes. Then the prepared meat should be slightly marinated beforehand, it will become softer, more gentle and, accordingly, the cooking time will be somewhat reduced. Marinade is absolutely simple. The duck should be rubbed with salt and pepper, cover with mayonnaise and soak in a sauce for about half an hour or more. Thus the prepared meat is already fully prepared for the cooking process, it remains only to choose the desired and affordable way - whether it is portioned fried pieces or the whole fried whole carcass. Duck, stewed with apples For this method of cooking, the carcass is cut into portions. It should be seasoned, peppered and left for a while for marinating. At this time, a large head of onions is peeled and cut into small cubes. Similarly, a couple of small, cleaned apples of sour varieties are shredded. In a frying pan, several spoons of vegetable oil should be heated. It is not necessary to pour a lot, since the duck itself is very fatty and during the frying process a sufficient amount of fat will be shed. Prepared pieces of duck are fried until a beautiful golden crust is formed. It will not take too much time and check the meat for softness and roasting absolutely unnecessary, as this is just a preliminary stage of preparing this dish. The bow and apples are poured out into a golden bird on a frying pan. All this is fried for five minutes, until the fruit and vegetable mass is softened. It is necessary to watch, that this sauce did not begin to burn. As soon as the onion is slightly blanched and the apples are allowed to juice, a glass of meat broth should be poured into the frying pan and covered with a lid so that the dish is cooked for 20 minutes. Then add 200 g of sour cream, salt and pepper to taste, everything is thoroughly mixed so that the duck pieces are completely soaked formed sauce. The dish is languishing on low heat for another half an hour. On a garnish to thus prepared duck it is possible to submit mashed potatoes or boiled young potatoes tubers. Sprinkle with fresh herbs and pour over the sauce in which the pieces of the bird were prepared. Duck meat is very delicate, tasty and not too greasy. 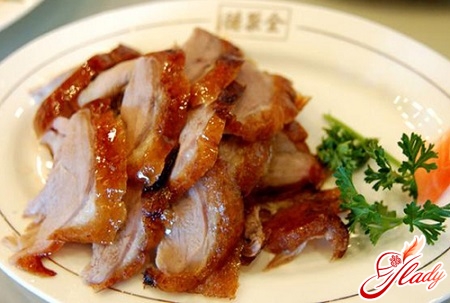 Bird, fried whole The principle of frying wholecarcasses in a frying pan are in many respects similar to the above-described method of cooking portioned chunks. Is that time will take a little more. To do this, gutted duck is taken, rubbed with a mixture of salt and pepper from inside and outside, if desired, is smeared with mayonnaise and marinated in such a way at room temperature for about an hour. You can fry the duck just like that, but you can stuff it. For the stuffing are selected acidic fruits: apples, lemons, oranges, prunes and so on. For example, take the traditional recipe for apples. Why sour fruit? Due to the fact that duck meat is very fatty and the final dish, respectively, is also obtained fat and heavy for digestion, fruit acids partly mask the fatty taste and neutralize some animal fats, which is very beneficial for the assimilation of food. So, apples cut into large pieces fit inside the carcass and the skin is sewn with a thread or pulled together by toothpicks. Lemon can be cut in half and put in whole halves. On a hot frying pan fry first from the side of the back to golden color. Then the duck turns over and fries on the stomach. Then it is filled with broth to the top, it is closed with a lid and stewed for about an hour until it is completely ready, periodically it is necessary to add liquid. When the meat is almost ready, you should take care of the aesthetic culinary form of the ready-made dish. To do this, the already prepared duck is smeared on all sides with a sweet and sour mixture of a couple of spoons of apple juice and a spoonful of any jam. Then the carcass is fried on high heat in hot fat on both sides for several minutes to give the golden color a crispy crust. Garnish, sauce and serving features to the table But it's not enough just to fry the meat. It is necessary to prepare for it another garnish and sauce. Moreover, it is nice to serve to the table, so that this delicious dish will surprise and amaze guests and relatives. A classic side dish to a fried duck is potatoes. It can be puree or whole boiled tubers, as already mentioned above. If the duck is fried entirely, then it is laid out in the center of a large dish, and around are boiled potatoes of potatoes. All this is poured with sauce and sprinkled with fresh or frozen greens. If the garnish is mashed, it can be beautifully laid around, forming a potato side. Decorate with garnish can be ketchup and mayonnaise. Portion duck pieces are best served immediately in plates, putting a piece of duck on the side, in the center garnish and sprinkling with sauce. For dishes from roast duck, sweet and sour sauce is most suitable, which perfectly complements the taste of any meat dishes. It is prepared simply. To do this, chopped onions and cloves of garlic are slightly spread on the oil, topped with a glass of dry wine and a spoonful of apple cider vinegar. The main highlight of this sauce is half a glass of orange or pineapple juice. The whole mass is salted to taste and languishing on a small fire for 15 minutes. For the density, you can add a tablespoon of starch. Of course, cooking a duck in a frying pan is a rather complicated and long process, but the result is worth the effort. These simple recipes will be useful for people who want to pamper themselves with duck meat, but do not have the opportunity to cook this bird in a traditional way on a baking tray in the oven or in a special scallop. Bon Appetit.

Pilaf with squid: recipe for gourmets

Chicken with buckwheat in the oven

Chicken in the oven on the bottle

Lazy cabbage rolls: a recipe for cooking for the busiest

Casserole potato with minced meat and mushrooms: reveal the secrets of home cooking

Casserole potato with minced meat in the multivariate: fast food