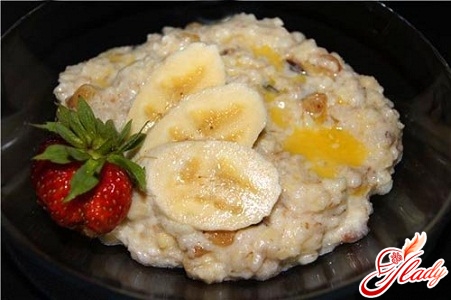 Oatmeal porridge, as is known, is very useful forhealth: it is used in dietary and children's nutrition, it is recommended to start luring infants to it. The most common form of oatmeal is flakes of oatmeal. They are used most often when cooking oatmeal. If your child does not like "gerseous" porridge, try to cook it in a variety of options. The child will like oatmeal with a banana, cinnamon or nuts and many others. For example, a banana contains fiber, starch, protein, potassium, magnesium, vitamins B2, PP, E, provitamin A. To satisfy the hunger, provide the body with energy and nutrients, you just need to eat a banana! It has been proved many times that it is very useful to eat bananas for diseases of the kidneys and liver, recommend them to eat with a stomach ulcer and even with diabetes. According to American scientists, bananas not only strengthen the nervous system, but also have a beneficial effect on the skin. They say that in order to avoid a heart attack, it is enough to include only one banana in the daily menu. Banana in porridge can also be combined with apples and pears, as well as other fruits. On the example of several recipes, let us consider what dishes from a banana and oatmeal can be prepared:

Cooking method: Milk pour into a saucepan, cover with oatmeal, sugar, add chopped butter and chopped banana. Banana can be rubbed on a large grater or cut into cubes. Porridge cook on low heat, stirring constantly, until it boils. Ready oatmeal with banana to remove from heat, cover and let it brew for 5 minutes. By the way, in such an oatmeal, you can not add sugar, because the banana is very sweet. Bon Appetit!

Oatmeal with banana and cinnamon

Cooking method: In a saucepan mix oatmeal, water, salt, sugar, bananas, cinnamon and raisins - then put on fire and bring to a boil. Pour the cake on low heat continuously stirring, and cook until the oat flakes completely absorb all the water. Before serving, oatmeal with banana is filled with cold milk and mixed thoroughly. Bon Appetit!

Oatmeal with banana and nuts

Cooking method: Pour cold milk into a saucepan and stirring, on a small fire, bring to a boil. A pan of milk to remove from the fire and fill it with oatmeal. Salt. Mix. Cover the pan with a lid and let it brew for 10 minutes. Finished oatmeal with banana is dressed with yogurt, and then before serving, it is decorated with pieces of banana, sprinkled with hazelnut and honey. Bon Appetit!

Oatmeal with banana and cottage cheese

Cooking method: In the pot, pour the water, bring to a boil, then pour oat flakes, add salt, sugar, stir and cook for 5-7 minutes. Then pour hot milk into a saucepan and cook for another 10 minutes. In the already prepared oatmeal porridge add butter and cottage cheese, mix well. Banana, pear and apple cut into cubes, and then sprinkle them porridge. Bon Appetit! We advise you to read:

Chicken in a multivark in sour cream: recipe

Pelmeni: recipe for a modern style

Potatoes baked with cheese and mushrooms

How to cook a roast of beef at home?