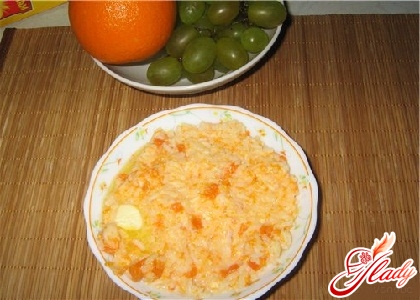 Oatmeal porridge with pumpkin - extraordinarily light incooking and very healthy. It is always included in both dietary and baby food. Most often for cooking breakfast "in a hurry" use oatmeal flakes "Hercules". If the household does not like oatmeal porridge, you can try to cook it in unusual combinations, for example, with a pumpkin, an apple, raisins and nuts and much more. By the way, the pumpkin is one of the most useful vegetables, and it was mastered more than 5000 years ago. Pumpkin is recommended for people with any cardiovascular disease, edema, anemia and overweight, all thanks to the high content of vitamins, proteins, fats and carbohydrates, as well as cellulose, glucose, minerals and trace elements. For example, carotene in orange pumpkin fruit is contained five times more than in carrots. Despite the usefulness of the pumpkin, there are limitations in its use. Prohibit it to eat those who suffer from diabetes, peptic ulcer and duodenal ulcer, as well as gastritis with a decreased secretion. What are the ways of making oatmeal porridge with pumpkin? Let's consider some of them:

Cooking method: Pumpkin should be washed, peeled and peeled, cut into cubes, pour boiling water in a saucepan, add sugar syrup and simmer under the lid for 30 minutes. Then pour into the saucepan the washed and rinsed oatmeal, add the heated milk, add a pinch of salt and simmer on low heat for about 35 minutes. Before serving, add butter to the porridge. Bon Appetit!

Cooking method: Wash the pumpkin, peel off the skin and seeds, then rub on a large grater. Onion finely chopped. Garlic let through garlic. Oat groats and clean and rinse. In a microwave casserole, pour the oatmeal, and then pour it with boiling water, cover and put it on the stove for 15 minutes. Then reduce the power and cook for another 20 minutes. The pan with the porridge should be removed from the oven, mixed and put back into the oven for another 10 minutes. At this time in a frying pan heat the vegetable oil, pour out a teaspoon of zira, add garlic and onions. All fry until golden brown, and then add the pumpkin. Stew for 10 minutes. The resulting roast is added to the porridge. When serving to the table porridge sprinkle with herbs. Bon Appetit!

Cooking method: Milk and water pour into a saucepan, bring to a boil over medium heat. Pumpkin finely chopped, add to the pan and cook for 2-3 minutes. Then add the oat flakes to the pumpkin, mix everything thoroughly. Oatmeal porridge with pumpkin is boiled until thick. In order to impart a piquant taste to the oatmeal, it is recommended to grind the porridge with a blender to a homogeneous mass. Next, you need to peel the apple from the peel and cut into small pieces, peeled the walnuts with a mortar and a handful of raisins soaked in boiling water for 30 minutes. Before serving in an oatmeal porridge with a pumpkin, put an apple, walnuts and raisins, add cinnamon and ginger, olive oil to taste and mix everything thoroughly. After this, it is necessary to lay oatmeal porcelain and pour it with honey. Bon Appetit! We advise you to read: