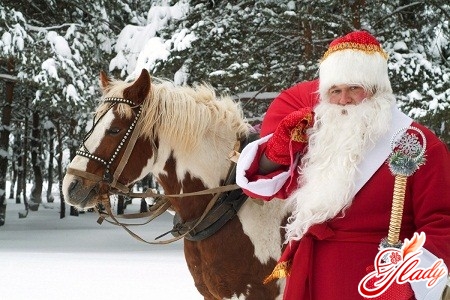 The New Year is not conceivable without its special,New Year's characters, which are different in each country, but their goal is to give adults and children gifts. To date, the image of New Year's heroes has developed completely, although a couple of centuries ago Santa Claus and Santa were just beginning to find their appearance. In Holland in the 19th century it was considered that gifts leave during the cleaning of chimneys a slender chimney sweep with a tube in the teeth.

Father Frost became an international hero andin many countries the New Year can not be conceived as without Christian customs, and without Santa Claus. And what a festive Christmas tree without Santa Claus. For children, the appearance of a magical grandfather is always a joyful event, as this means the beginning of miraculous transformations and gifts. At the end of the 19th century, Christmas trees appeared in Russia, which were bought mainly for children's amusements, this tradition came from Germany. First, parents themselves played the role of Santa Claus and only later began to hire for this actors and invite to the holidays, not only relatives, but also friends and acquaintances. So, gradually, Santa Claus descends from the postcards to the joy of the kids and turns the New Year from a family holiday into a secular one. At first it was just a Christmas tree toy, then the size of the toys increased, and the grandfather with the beard began to decorate the shop windows, and only at the beginning of the 20th century the character really revived. Someone put on a red caftan, took a staff and a bag with gifts and we had a real fairy-tale character. Most likely, this idea came to the mind of parents who wanted to dispel the doubts of children who believe that the magic grandfather does not exist or the idea of ​​one of the actors who decided to earn some money on the eve of the holidays. But the joy of the children was no limit, they wondered whether the real beard of his grandfather and why he does not melt in a warm room and where he lives all year. Already in Soviet Russia, the New Year is beginning to be celebrated on a grand scale - all institutions for their employees and their children are carrying Firs and blue lights. And although year after year the scenario of the celebration was practically unchanged, since it was to be approved by the Ministry of Culture, Soviet citizens were happy, both to the Christmas trees, and to Santa Claus. 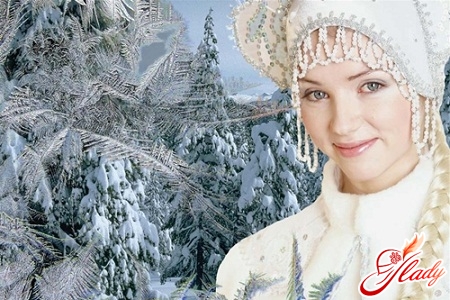 Granddaughter of Santa Claus, a real Russian beauty withoblique to the waist in a beautiful fur coat and with a pink blush on his cheeks. It is she who helps to distribute gifts and cheer children on children's New Year's holidays. But why only we have the Snow Maiden, who among other things is a symbol of purity, youth and love. Snegurks and bullfinches in Russia were called as birds with pink breasts, which, not afraid of frost, stayed with us for the whole winter, and snow figures. The idol of the snowman was beginning to sculpt at the end of January, and in many fairy tales it was emphasized that sometimes such idols came to life in the form of a beautiful girl, so the childless old men also tried to blind themselves to their snow granddaughter in the hope of a miracle. This girl from the snow was the daughter of Spring and Frost, but she always left her old people, turning into a babbling brook, and gives her smile and blush to field flowers. In the legends of other nations it is said that it is possible to give birth to such a snow-maiden girl by swallowing snow or simply looking at it. But now the Snow Maiden is the companion of Santa Claus, who every New Year pleases us with his coming to the feast. Many girls choose this suit as a New Year's dress, which allows them to be in the center of the New Year's celebration.

With Santa it is a little easier, after all, for certain it is known,that the name of this character is associated with St. Nicholas (from the distorted Dutch Sinterklaas). This character is widely distributed in the American states and appears on New Year's Eve in a sleigh harnessed by reindeer. His suit is similar to the costume of our New Year's grandfather, only the caftan and the beard are slightly shorter. But he took not from folk legends and beliefs, but from the poems of Clark Moore and the pictures of Thomas Knight, which, incidentally, does not make the character less fairy.

Slightly less common are gnomes and wanderingactors who whistle Christmas songs, travel from city to city, giving out gifts to residents and bringing the New Year. For example, in Sweden the good grandfather Yulotmtennen, along with the dwarf Yulnissar, comes to the children. And in Finland, Iolupukki, a little man in a green jacket and a red cap, accompanied by gnomes and a donkey, brings presents, and it is the donkey that gives presents to each child. And in Italy, for New Year's gifts, answers the kind fairy Befana, who uses a broom for this occasion, in order to catch every kid on New Year's Eve. But all the characters are always kind, desired and loved, so it does not matter who will present the package in shiny paper, the main thing is that no one child remains on New Year's Eve without a present. We advise you to read:

How did the Christmas holiday come about

New Year Signs: How to Attract Happiness and Welfare

How to keep the freshness of flowers

Bustle before the New Year