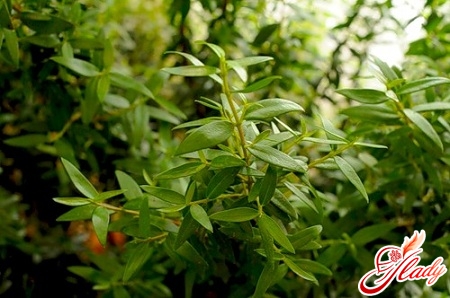 People have long been credited with plantsmiraculous properties, endowed them with magical power and even deified. Today, it is all quite understandable scientifically confirmed facts of truly unusual properties of the flora, which is able to both heal and kill. However, floristic symbolism is still a mystery. So deep it all goes back to antiquity, that modern researchers can only speculate, or unconditionally trust the legends. Here, for example, myrtle tree. Why is this evergreen shrub considered a symbol of integrity? Why did he choose Adam, who brought him from Paradise? What is this wonderful plant that has become a popular indoor flower? And how is this native of Eden kept at home, providing him with competent care and comfortable conditions? Let's try to figure it out.

As one of the legends (Arabic) says, myrtlecame to us straight from Paradise. The exiled Adam brought him with him to sinful land, as a kind of souvenir that would allow him to remember the carefree life and paradise booths. That is why myrtle has become a symbol not only of paradise happiness, but also of hope (to return to blessed times?). According to the Jewish legend, Zachary, who appeared in the myrtle bush, announced the restoration of the kingdom of Israel. Hence another symbol of myrtle - the emblem of the world. In ancient Greeks myrtle was considered a flower of Aphrodite and symbolized beauty and youth. And in Ancient Egypt myrtle was associated with the afterlife or life after death, as according to one of the legends he grew up from the body of a young murdered woman. That is, it was reborn in the myrtle tree. By the way, in ancient times graves were decorated with myrtle branches, where the tradition of laying funeral wreaths and garlands was led. Do you remember the legend about the apple of discord? So Paris, who gave Venus an apple (the "crown" of the beauty queen), supposedly was not attracted by the beauty of Venus itself, but by the beauty of the miracle wreath that adorned the head of the contestant. And the same head was decorated with the same head of the god of marriage Hymen. Well, love, marriage, myrtle and, as a consequence, a new symbol (love and marriage). However, symbols symbolize, and grow myrtle trees in houses rather for aesthetic reasons, rather than as talismans. This evergreen shrub is so beautiful, as if it really adorn the Garden of Eden. And how was it really? 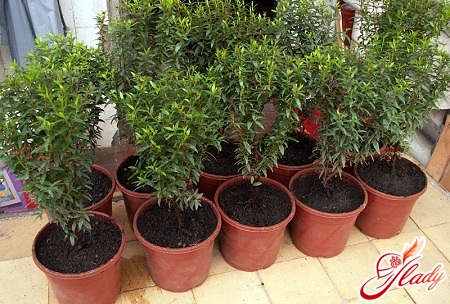 Myrtle is a whole kind of evergreen treeplants of the subtropical climate. Myrtle is remarkable because its leaves contain essential oils and smell no less than flowers. And the blooming myrtle is not just a beautiful phenomenon, but also a fragrant phenomenon. Perhaps, that is why myrtle groves are associated with heavenly tabernacles. Essential oils of myrtle wood have long been used to make incense. But buds of clove-tree (one of the varieties of myrtle) are still used as the most famous spice - cloves. A roomy myrtle tree or a bush is a myrtle common or myrtle compact. More than one of the species of myrtle was "domesticated" to man. The indoor myrtle is an evergreen shrub with a tree stalk, which can be shaped and grown in the form of a small tree. Home myrtle tree never grows above two meters, and blooms and begins to bear fruit after the third year of life. The leaves of the myrtle are ovoid, dark green and shiny, about five centimeters in size. The flowers are small, fluffy, white or pinkish. The compact myrtle features miniature sizes and narrower leaves, as well as black decorative berries that appear on the plant after flowering. The myrtle tree is a plant-longevity among indoor flowers, which until now has not completely adapted to living in enclosed space. Therefore, a roomy myrtle needs special care. And although in general the myrtle is considered an unpretentious plant, the subtleties of its cultivation still need to know.

So, you have a myrtle tree - liketo take care of him so that he not only easily transferred the resettlement, but also continued to grow in your home, so that he was avoided by illness and not be tormented by pests? Special care is explained by the origin of this plant. Since the myrtle comes from the subtropical forests of the Mediterranean, for its successful living in a room it is necessary to create a similar microclimate. The main thing is that it needs myrtu - high humidity. Therefore, the tree should not only be regularly and well watered, but periodically sprinkled. Water the myrtle bush only with soft, well-kept water. In the warm season of the world for a comfortable existence it is necessary to provide a temperature regime within the limits of 18-23 degrees. At this time, the main care is reduced to maintaining the temperature and light conditions, so the tree in this period needs bright lighting. If it is possible to move the pot from the tree to fresh air, then put it on the balcony or even move it to summer in the garden - but in the open air the myrtle tree literally comes alive and feels great. Myrtle easily tolerates direct sunlight, but needs shading in particularly hot weather. To water a myrtle tree it is necessary so that the earth in a pot always remained slightly damp. At the same time, in any case, one should not allow stagnation of water, which will cause decay of roots and death of the plant. In addition, in wetland soils pests are easily planted and multiplied (scabs and whiteflies). Therefore, watering a myrtle tree is better often and regularly, but not abundantly. And it is even better to arrange drainage from porous pebbles in a pot tray. In winter, it is desirable to transfer the plant to a cool place. If the room temperature is too high, the tree will start to discard the leaves. However, experienced flower growers argue that with the onset of spring myrtle quickly comes into shape, knocking out new buds and restoring the crown. So maintaining the right temperature, regular watering and spraying are the main care for this plant. But only this can not be avoided. Like any long-living plants, myrtle needs periodic transplantation. Do it best once a year with the onset of spring, choosing for wood in the soil with neutral acidity. More frequent transplantation (two to three times a year) may be necessary only in the initial period of development of the tree. If you form the crown of a tree, then it is desirable to carry out pruning during this period. However, an additional haircut during the summer myrtle will not hurt. Pruning will not only give the desired shape to the crown, but also make it thicker. Propagation of the myrtle at home - the process is literally elementary. It can be propagated by the usual cuttings, using green cuttings as a planting material. It is especially convenient to do this after pruning, choosing the strongest and healthy specimens. Cuttings put in a glass of water or placed in wet sand. Cuttings are rooted quite easily, but for a long time - for two three months. The erroneous care for myrtle - overmoistening or overdrying the soil, as well as too frequent fertilizing. Fertilize this plant should not be more than two times a year. The first top dressing is desirable to do in the spring with the beginning of active growth of shoots, and the second time to feed the myrtle is necessary during budding. But foliar top dressing (sprinkling) myrtle will not hurt. So use any complex fertilizer to do this, spraying about once every ten days. 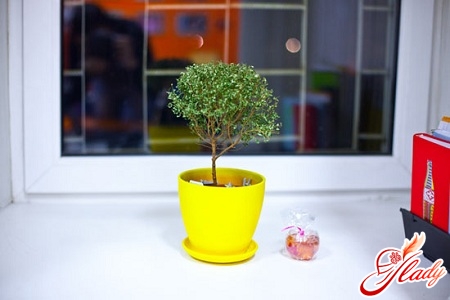 Properties of the Myrtle Tree

Myrtle leaves secrete essential oils all year round and therefore always retain their healing power. And what are the properties of myrtle wood?

From the leaves of myrtle can be prepared medicinal tinctureand take it for infections and inflammations, and also use instead of green and iodine. Flowers and leaves of myrtle can be added to tea, and simply to inhale the fragrance of this amazing house tree is very useful and pleasant. This is such an extraordinary and legendary plant: myrtle is a tree of paradise hides. We advise you to read:

How to make an alpine slide, rock garden

Decorating the garden with your own hands

Types of orchids. How to make a choice?