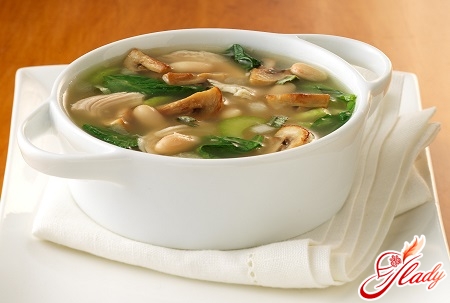 Fragrant soup with fresh mushrooms - gorgeousway to diversify the daily diet. Such first dishes are distinguished by excellent taste and at the same time surprisingly low-calorie, which means that they can be enjoyed with pleasure by those who care about their figure. Gourmets and cooks have long argued about the taste of dried mushrooms, but they all agree that fresh mushrooms give the first dish an incredible taste and a tempting aroma. A dried analogue can be pampered in the winter, and in the warm season it is better to give preference to freshly picked or purchased.

And again about caution

That the meal brought exclusivelypositive emotions, it is necessary to observe all precautions and to conduct the correct preparation. It is vitally important to use for cooking only those mushrooms, in the edibility of which are absolutely sure. If you have the slightest doubt, the workpiece without regret should be sent to the trash can, because even the most attractive specimens can conceal a mortal danger. Do not buy fresh mushrooms from strangers, especially in the case of spontaneous markets on busy roads. The same applies to canned delicacy. Failure to comply with the rules of procurement can significantly damage health. So, after the ideal fresh mushrooms are selected, you need to properly prepare them. Gifts of wood should be thoroughly washed, possibly using a brush of moderate hardness. With a sharp knife, remove darkened places, make a cut on the stem to exclude the possibility of infection with worms. After that, clean, remove the film from the cap, if necessary, cut into small slices, 2 * 2 cm in size. Such a size will allow them to give the broth all the flavor and aroma, so that the mushroom soup turned out to be especially appetizing. After that, you can study the recipes, choose the right one and proceed directly to cooking mushroom soup. 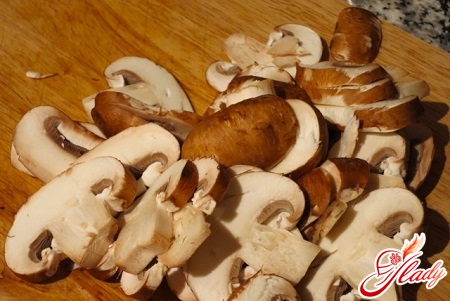 Such a soup can be called the classics of the first dish withfragrant gifts of the forest. He will perfectly sate and warm in the fall, but he will not leave behind a gravity that will not allow him to enjoy life. Water or broth should be brought to a boil. At this time the prepared mushrooms are lightly fried in butter until an appetizing fragrant crust forms, which will give the dish a unique golden hue. Pour the fried forest gifts into the broth. After boiling remove the formed foam, if necessary. Cook the mushrooms, lightly adding the broth and adding the bay leaves, for 15-20 minutes. Then put the potatoes in a pot, cut into cubes or cubes. Cook until the root is ready. Then add the greens and a small slice of butter. Even such an inexperienced mistress can cope with the preparation of such a mushroom soup, and the taste and aroma of the dish will amaze the most sophisticated gourmets. You can serve with sour cream and fresh bread. Also in the role of an ideal complement can serve bread toasts from wheat bread, dried in a frying pan or in the oven. 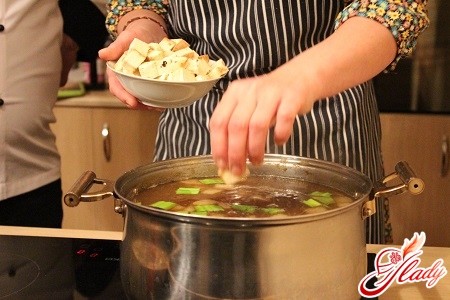 Water should be brought to a boil and lowered into itpre-prepared mushrooms. Wait for a violent boil and remove the formed foam. The first broth can be drained, in which case the mushroom soup will be less saturated. Boil the mushrooms for 15 minutes, then add chopped potatoes, salt, bay leaf. Add vegetables should be at the half-cooked root. Cook until softened vegetables, then take out the bay leaves from the broth, put greens and spices in the soup. Continue cooking for 5 minutes after boiling. Serve hot. Such mushroom soup is perfectly combined with sour cream. To make this light and fragrant soup become more nutritious and saturated, you can lightly carrot and onions on vegetable or butter until golden. Such a roast, added to the soup, will make it particularly presentable. 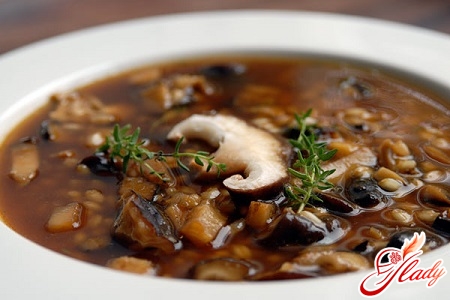 After all the preparatorywork, you need water or broth to bring to a boil. Add finely chopped onions and carrots, grated on a fine grater, boil for 10 minutes. Then enter chopped mushrooms. If foam forms after boiling, it needs to be removed in order to avoid fogging the dish from mushrooms, the recipe suggests several ways to avoid this problem. Boil the mushrooms for 15 minutes, then pour a small handful of noodles, given that during cooking, it increases significantly. After boiling, cook for 10 minutes, then add butter and greens and boil for a few minutes. To make the mushroom soup prepared according to the proposed recipe perfectly transparent, you can weld the noodles in a separate bowl, rinse thoroughly and add already prepared simultaneously with butter and greens. When serving on the table, an appetizing first dish can be decorated with fresh herbs and a small portion of sour cream, which will perfectly set off the taste and aroma. On the same recipe, you can prepare mushroom soup with rice. The order of laying ingredients does not change, only instead of noodles you need to use pre-washed rice of any kind.

This recipe will surprise even those guests who consider mushroom soup a banal first course. You will need:

Mushrooms are prepared and stewed in butter infor 15 minutes, add parsley and spices, leave over low heat for 5 minutes. A tablespoon of oil should be mixed with flour in a saucepan, thoroughly warmed and fry until a characteristic golden color appears. Add the necessary amount of water, observing the precautionary measures and avoiding splashing. The resulting broth bring to a boil and add the stewed mushrooms. Cook for 15 minutes. After this, introduce fresh chopped parsley and grated yolk. Remove from heat and allow to infuse for 10 minutes. An unusual mushroom soup is ready. Any soup with mushrooms is a delicious and satisfying dish, the main thing is to pick up a suitable recipe and show a little imagination. The gifts of the forest have a truly universal taste and can complement any ingredient. So, with their use, you can cook unusual dishes every day with a bright scent.

Soup with meatballs and rice with their own hands

Cheese soup in the multivariate: a recipe for express meals

Cheese soup with chicken: a recipe for lovers of French cuisine