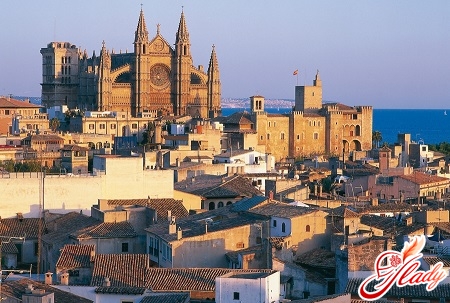 "Let you dream of Palma de Mallorca ..."really will dream a very long time. And not only Palma de Mallorca, but all the other beauty of the island. Because Mallorca is a paradise where you want to stay forever. So what is the romantic Mallorca, or, in other words, Mallorca? The largest (in contrast to Menorca) from the Balearic Islands, the owner of which is Spain. The island from ancient times resembled a large busy intersection. Hordes of conquerors of different nationalities wandered there and there. Here Carthago and pirates were noted, Rome and Vandals, Byzantine Christians and Muslims, Moors and Catalans. There were mysterious almoravids and almochads. And this continued until 1716, until the Balearic Islands finally became the Spanish province. In the 50s of the 20th century, the island embraced the tourist boom and they have changed significantly, gradually becoming the largest international tourist center. It was here that all the adventures of the long-suffering island of Mallorca came in handy. They immediately turned into his sights. Of course, the one who first came to Mallorca will see everything: nature (oak groves, pine forests in combination with white beaches in the bays), villages in olive and orange groves, windmills. But we assure you: these are not attractions yet. This is a romantic background, on which we will try to discern them. 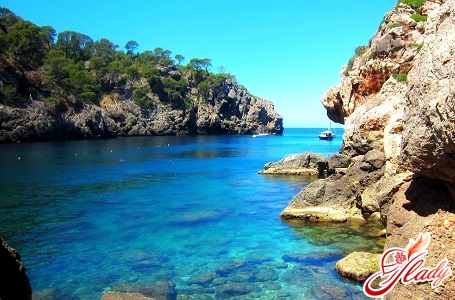 Valdemossa - picturesque village, famousThanks to the monastery of the Carthusian monastic order. Originally the majestic buildings of the monastery were the palace of King Sancho I of the Pacific. Why he was called Silent, the story, alas, is silent. Deia is another cozy place, located near Valldemossa, about 10 miles to the north. Deia is known as a protected habitat for writers and poets (Carmen Naranjo, Robert Graves, Anais Nin and others) and a model of the bohemian style. Spain and Mallorca attracted talented people. Banyalbufar is a unique village with agricultural fields located on terraced plots. Built all this splendor was back in the time of Arab rule. The village is also famous for its original ceramics. Fornaluch - a sample of a typical medieval Spanish town. Winding narrow streets, cobbled with stone, and old stone houses contrastingly appear against the background of blossoming orange groves and each turn takes us back to the depths of centuries. Fabulous natural reserves and parks are fabulousthe island of Mallorca. Botanical Garden, he is also a garden of cacti Botanicactus. One of the largest botanical gardens in the world, it strikes with the diversity and magnificence of its flora. Here are the humid jungle, the desert with cacti, and the typical vegetation of Mallorca, in which the windmill, the 15th century hut and various pergolas are organically inscribed. Park-Reserve Galatzo - a natural park for adventure lovers. Waterfalls, pendant bridges, rock climbing and rope descent will not let you forget about the rest in these places. Park Spanish Village. The whole of Spain will appear before you. you will walk along the streets and squares of all its numerous provinces and after another turn from Madrid you will get to Barcelona; crossing the road, transferred from Toledo to Cordoba, and then to the Arab baths of the Alhambra in Granada. The park contains copies of the most famous architectural monuments of Spain. The gardens of Alfabia are documented by the era of Arab domination (the beginning of the XIII century). The landscape is dominated by fountains, springs and streams in Arabic style. The appearance of the manor and gardens, occupying an area of ​​about 120 hectares, has changed over the centuries more than once, but the general style has survived to our times. Park Sa Albufera de Mallorca and the Sa Dragone Nature Reserve - for fans of fauna. If the first is a bird's paradise, then in the second you will have plenty to look at the lizards (here lives the endemic species of these reptiles). 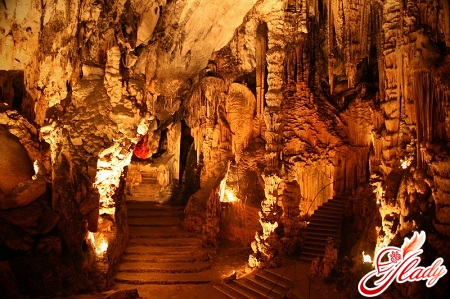 Mysterious caves - the most impressivea natural creation in Mallorca. The Caves of Art. Some of the names of underground stalagmite halls, opened in the XVI century, make nervously startle particularly impressionable visitors: Purgatory, Hell, Paradise. Caves of the Drak. A fascinating spectacle of the underworld near Porto Cristo. Kilometers of natural stone sculptures, narrow aisles and stairs leading to the Vampire well, the halls of Louis Salvador and Luis Armand. The Ams caves received their name from stalactites and stalagmites filling them. In the Majorca dialect, Ama (Hams) means "hooks, harpoons." Here you will enjoy an equally impressive spectacle of underground halls, labyrinths and lakes. 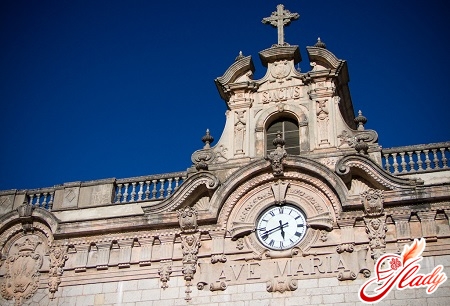 Well, of course, you can not bypass the actualhistorical sights: cathedrals, temples, monasteries, - where every stone is a silent witness of its era. Palacio de la Almudaina, in other words, the Almudine Palace, is the most ancient palace complex in Spain. The Moorish creation and residence of the Moorish viziers with a typical architecture of those times is a rectangle with tall watchtowers in the corners. From 1230 until now it is a guarded residence of the Spanish royal family. The names of the towers of the citadel are symbolic - the Tower of the Angel with the sculpture of the patron saint of the city of Archangel Gabriel on top, the Tower of the Heads - from the 15th century on it hung the heads of executed criminals. And if you have reached the palace complex, then be sure to look at the chapel of St. Anne, the Throne Room, the Royal Garden and the ruins of the Arab baths of the 10th century. The Cathedral of Mallorca is a true example of Gothic architecture of the XVII century. This is Spain with its peculiar architecture in its pure form. In the cathedral there is a unique artifact - the ark of the True Cross of the Lord. But especially the cathedral is famous for the fact that interior design and exterior lighting was designed by Antonio Gaudi himself. The Carthusian Monastery. This is the same monastery from Valdemossa. The terraces and fountains of the monastery, hanging over the abyss, are a spectacular sight not for the faint-hearted. Church, pharmacy, gallery - everything breathes old, everything is covered with legends. One of such legends, based on real facts, about lovers Frederick Chopin and George Sand, are especially proud of the local inhabitants. The Church of Saint Eulalia is an elegant Gothic structure of the 15th century. Like many other temples, it is built on the foundation of an Arab mosque (in the opinion of some historians) or an early Christian church (according to others). It is famous for the fact that it contains the image of Jesus Christ, with whom King-conqueror Jaime I (Jaime I) did not part. But the Basilica of St. Francis is directly related to Jaime II (Jaume II). The complex in the Gothic style consists of a church, a gallery and ancillary buildings. To pay attention is to the closed gallery - a cemetery and a sarcophagus with the remains of the monk-writer Lullia. The inner courtyard of the basilica with its cypresses, lemons, oleanders and palms growing in it is reminiscent of the style of the court of the Moorish rulers. Monastery Luke (Santuari de Lluc) - a beautiful architectural ensemble, consisting of a church, a museum and outbuildings, beautifully located in the garden. Built in the XVIII century on the site where, according to legend, the shepherd found a statue of the Virgin Mary, the monastery is the religious center of the island and the ultimate goal of many pilgrims arriving on the island of Mallorca. In the monastery, to the image of the Virgin Mary, in a mountain valley at a height of 525 meters above sea level, believers and pilgrims rise on ordinary and holiday days. The monastery is also famous for its boys' choir. Another pilgrimage center of Mallorca is rightly considered the Hermitage of San Salvador, a shrine known for its 7-meter figure of Christ and Bethlehem palaces.

Castles and fortresses of the island

Especially noteworthy are the castles of the islandMajorca. Many of them were built as fortresses for defense, others - acted as fortified settlements. Bellver Castle is the only round-walled Gothic castle. Spain rightfully can be proud of this unique structure, which has no analogues on its map. Built in the 16th century on a high hill, it was an ideal fortification solution for defense with a wide view of the surroundings and the bay. The royal residence, later the military prison, and now the historical museum of Palma de Mallorca - all of these its features attract many visitors from all over the world. Castle Capdepera - now a castle museum located on a mountain, near the strait, separating the islands of Majorca and Menorca. In 1300, Jaime II (Jaume II) built a fortified settlement to defend the local possessions from pirate attacks. The castle of Alaro can hardly claim the title of a defensive structure. First there was a Moorish fort, which held the defenses of Christians. Then in the XIII century a castle was built to protect against foreign invaders. Only historical evidence of his former glory has reached us and the ruins of the fortress are dumb witnesses of the inexorable passage of time. Well, here we have inspected the main attractions and now we can afford to relax a little and take a ride on an old train from Palma to Soller. In an unforgettable journey through a narrow track laid in the mountains, through tunnels and bridges, leisurely, letting you enjoy panoramic views, take you to the north of Mallorca a classic retro express. The final destination is Soller. A charming old town with narrow streets. The corner of Mallorca, where emerald mountains through sunny-orange plantations tend to the turquoise sea. And after a walk on the train you can afford to relax completely and forget for a while about the sights of a wonderful island. Although ... Let us throw a stone at someone who does not consider the world-famous golden coast of the island of Mallorca his next attraction. There are about 200 beaches on the island. The total length of the coastline is more than 550 km. The coastline of most beaches is a combination of sunny pine and shady oak groves with rocky precipitous descents to the sea. More than 30 snow-white beaches of Mallorca are rightly marked by the "blue flag", which confirms the amazing cleanliness and safety of the coast. The tourist areas of Cala Mayor, Arenal, Cala San Vicente, Magaluf and San Agusti are considered the best on the coast of the island. Spain and Mallorca are waiting for you!

Sights of Paris: what to visit in the capital of France?