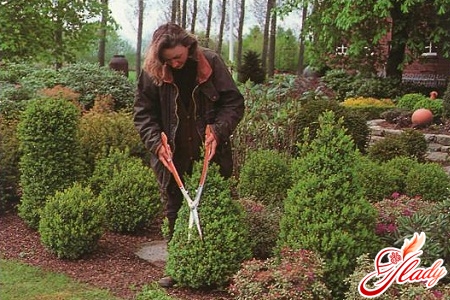 What turns a gem into a workjewelry art? A cut and a worthy frame. The same magic facets that will turn your garden into a real diamond, will be hedges. And your goals and wishes will determine what kind of hedge will be: bushes or trees, high or low, natural or sheared. Let's figure out how to create a hedge in the garden. Which shrubs to choose? How correctly to plant? How to care for her?

Living hedges have been known since ancient times. According to the annals, hedges were adorned with hedges in Ancient Babylon. Blossoming hedges of lilac, roses and jasmine surrounded the gardens of the East. In the gardens of Ancient Egypt planted hedges of figs, palms and ebony trees. The orchards of Ancient Rome were decorated with hedges of noble laurels, rosemary and boxwood. In Europe hedges have been known since the Roman conquests. First they were used to protect aristocratic and monastic possessions, and from the 16th century began to build labyrinths of hedgerows. Later, hedges became a convenient tool for planning gardens and dividing them into separate zones. In Russia hedges appeared in the 18th century. The first Russian garden with coniferous hedges was the Petersburg Summer Garden, which became an example of the correct geometric marking of the garden (regular style). Gradually, this style was replaced by a landscape style (the style of free planning). And till now it remains the most popular in Russia. It is in this style that the landscapes of the majority of city parks, garden plots and country gardens are sustained. But in his own garden, as you know, the owner is a gentleman. Every gardener can become himself a designer and create an inimitable sample of landscape art. Nevertheless, to create a beautiful garden you must possess either an innate taste or a certain knowledge. To arrange a hedge in your garden, you need to determine its appearance. The hedges have different purposes. It determines the type, size and planting material.

What are the hedges?

Depending on the location on the site, liveThe fence can be external and internal. External hedges fringe and protect the garden, the internal ones are used for decorative decoration. On the composition of plants, hedges can be divided into prickly and soft, on deciduous and coniferous, on mixed and single-species. Prickly hedges are an excellent alternative (or addition) to a solid fence. Coniferous hedges, in contrast to the deciduous, keep their decorativeness all year round. But the deciduous grow rapidly and easily form. In its form, a hedge can be natural or formed. Natural fences must have natural decorative properties. They usually choose beautifully flowering shrubs. The trimmed hedge will take up a little space, it will look stricter and neater, but it will require more care. The hedges are also subdivided in height. Living walls - above three meters, directly hedges - from one to three meters, borders - up to one meter. However, not all plants are suitable for building hedges. Consider the most common and well-established ones. 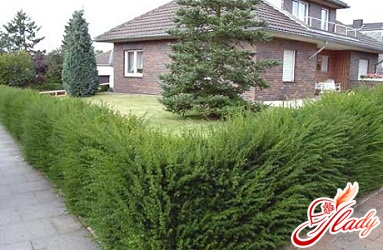 Shrubs and trees for hedges

Green walls are made, as a rule, from treesconiferous species: spruce, pine, juniper, and thuja. Of deciduous trees for living walls use larch, hornbeam, maple, bird cherry, and thistle. All of them, of course, are beautiful and useful, but slowly (sometimes very slowly) grow. Yes, and living walls are designed for framing park areas or large suburban areas. Therefore, gardeners prefer not very high fences of bushes. For high (up to two and a half meters) fences shade-tolerant slowly growing shrubs and trees with small and dense foliage are suitable. For example, evergreen laurel and thuja. Lavrovishnia, year round covered with shiny green leaves, quickly and well grows. Fence from it is better to arrange in the penumbra. Tuya, on the contrary, loves sunny places. It is suitable for both free-growing and sheared fences. For such hedges, laurel, buckthorn, hawthorn, and crochet will also suit. Low hedges (live curbs) are planted along garden paths and paths, along the edges of lawns, around stairs and terraces. Such curbs can be cut, but you can keep the natural shape. They are suitable for low shrubs with dense branches: spindle, boxwood, spirea, heather, erica. For example, the cottonwood (kuril tea). These are small (from 60 cm to 1 m) bushes, which all summer bloom with white, pink or yellow flowers. The spindle well tolerates penumbra and pruning. Blossoming hedges. For them, beautifully flowering shrubs are suitable: rose, jasmine, viburnum, rhododendron, lilac, hydrangea. A flowering hedge does not undergo formation and does not require careful care. Over time, this fence will become a real bird paradise and a suitable home for hedgehogs. Fruit bushes can also be planted as a hedge. This, by the way, can be an excellent design solution for a small fruit garden. Therefore, such a hedgerow at the dacha will be particularly appropriate.

How to plant a hedge?

After you decide on the type of fence,a planting site and a choice of plants, you can proceed to planting. If you intend to plant already adult plants, then remember that they significantly tolerate the transplant and are much more expensive than the seedlings. Therefore, it is better to plant young plants for the hedge. Suitable age of deciduous seedlings - two or three years, coniferous - three or four. Plant them best in spring, late April or early May. Time from mid-August until the end of September is suitable for autumn planting. The hedge is planted for a long time, so its device begins with the preparation of the place. It is necessary to excavate the trench. The depth is the spade bayonet, the width is from half a meter to a meter. At the bottom of the trench you need to pour humus, peat or manure and loosen up. The seedlings (after removing the broken and dead roots) are planted in a trench at a distance of 30-50 cm. They are planted in moist soil, adding fertilizers. Planted plants are cut approximately by one third. 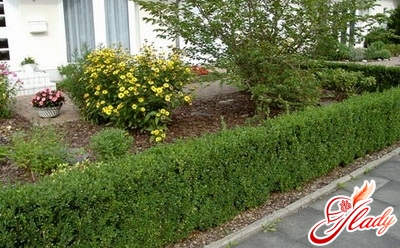 How to care for a hedge?

Care for hedges is not much different fromcare for other garden bushes. On hot days it should be watered. Fertilize according to the rules, during growth and flowering. The first pruning for the hedge is carried out the next year after planting. In the future, the hedge is sheared twice a year - in late spring and early autumn. Young plants are cut no more than a third of a year's growth - this contributes to the intensive growth of branches. When the hedge reaches the desired height, a shearing or a garden shear is carried out with a pruning shear. If you comply with all these rules, then your hedge in a dacha or in a large garden of a country house will certainly be a matter of special pride. And perhaps an example to follow. That, strictly speaking, that's all. Good luck in the field of garden design, and your garden - unfading beauty! We advise you to read:

How to care for a lemon in the home: the way from the seedlings to the fruits

How to transplant an orchid on your own

Money Tree. Care of the plant