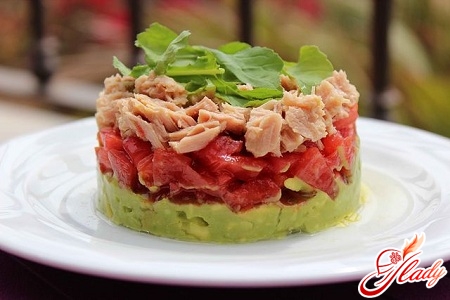 Salad with tuna and tomatoes - perfectA balanced dish in which the main ingredients perfectly complement each other. Let's start with tuna. This fish is a champion among seafood on the content of polyunsaturated fatty acids omega-3, the benefits of which are written hundreds of books, articles, dissertations. But not only this can boast of tuna. Its meat is rich in potassium, calcium, all vitamins of group B, and also vitamins A, E, D, folic acid. Tuna is a commercial species of fish, its production reaches huge proportions, and the main consumers are famous fish gourmets - the Japanese. What is so attractive about tuna? Of course, in the first place, it is worth noting its excellent gentle taste. In this case, he rather reminds of his taste qualities is not fish, but meat. Tuna also has high culinary virtues. It can be boiled, fried, baked, steamed, in a word, to apply any kind of cooking. In Japan it is eaten raw. The most exquisite types of sushi are made from tuna, as there is an opinion that it does not contain parasites, unlike other types of sea fish. And, of course, we must not forget about canned tuna, which are very popular in many countries. It can be tuna, cooked in its own juice or with the addition of olive oil. Actually, opening a jar of canned food, you can drop a few drops of lemon juice, sprinkle finely chopped green onions - and here's a ready-made dish, hearty, tasty and useful. Canned tuna perfectly coexist with all varieties of lettuce leaves, cucumbers, tomatoes, eggs, onions, in a word, practically with all vegetables. Tuna salads with tomatoes are very tasty. Tomatoes also have a number of useful properties. They include almost all groups of vitamins (including vitamin C), as well as potassium, magnesium, iron, zinc. Recent research scientists have found that lycopene, contained in tomatoes (it is this substance that gives the vegetable a rich red color), has a high antioxidant effect, which is enhanced after the heat treatment of tomatoes. Lycopene also has a beneficial effect on the entire cardiovascular system. In addition, in tomatoes there is serotonin, known as the hormone of happiness. And one more important quality, which can not be ignored, speaking of tomatoes, is the low calorie content of these vegetables. All of the foregoing convinces us that the combination of such useful products as tuna and tomatoes is most useful for our body.

Salad with tuna and tomatoes

Cooking method: Fish mash along with the liquid, add finely chopped onions and sprinkle with lemon juice. Leaves of lettuce and tomatoes to wash and dry. Leaves put on a dish, slide a stack of fish, sliced ​​tomatoes and pour with olive oil. Decorate the salad with tuna and tomato slices of eggs and greens. Serve with dried baguette or ciabatta. Note. Vegetable oil activates the antioxidant effect of lycopene, contained in tomatoes. 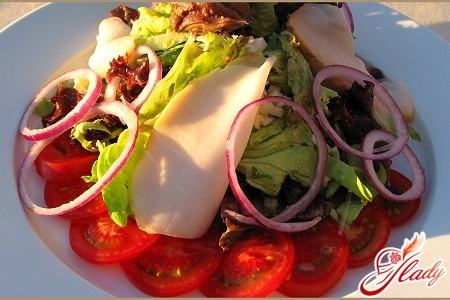 Salad of tuna and tomato with avocado

Cooking method: Avocado cut lengthwise into two parts and gently loosen from the stone. Pulp with a spoon so that it does not damage the skin (it will be useful). Grind the avocado, sprinkle with lemon juice. Tomato scald and peel. Cut into small cubes and add to the avocado. Finely chop the onion. Tuna a little mash with juice and add onion and avocado and tomatoes. Salt, pepper, add lemon juice if necessary, pour it with olive oil and mix everything thoroughly. Fill the halves of the avocado with a salad, decorate with olives and greens. Serve on lettuce leaves.

Salad of tuna with tomatoes and rice

Cooking method: Pieces of fish carefully removed from the jar and divided into small pieces. Remove the tomatoes from the peel and cut into cubes, chop the onion. Banana peeled and cut into small pieces too. Put rice in a salad bowl, add vegetables and a banana, mix and pour with a dressing made of butter, lemon juice, salt, pepper and Tabasco. Place tuna pieces on top. Garnish with greenery. Salad with tuna and tomatoes in this version has a very piquant taste, it is light and nutritious at the same time. Tuna salad with tomatoes and beans

Cooking method: Stir the fish, add the beans, the chopped onion and the cherry tomatoes, cut into halves. Salt, pepper to taste and pour with a dressing, prepared from balsamic vinegar and olive oil. Stir, lay on lettuce leaves. Garnish with green basil. Be sure to include in your menu salad with tuna and tomatoes. This is not only a delicious food, it is also a dish that strengthens health, beneficial effect on the cardiovascular system. Bon Appetit! We advise you to read:

Salad with squid and tomatoes: bright appearance and juicy taste

Salad with shrimps and corn: bright and juicy

Salad from squid with egg: from simple to complex

Salad with tomatoes and cheese: delicious secrets of an ideal figure