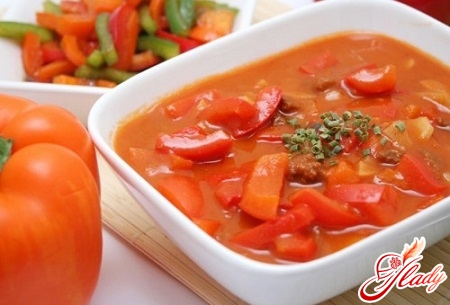 It is considered a traditional Hungarian dish andwidely distributed in Europe. They love to cook lecho and Russian housewives, and each has its own unique recipe. At home, in Hungary, lecho is served as an independent dish. As a rule, there is a fat in it, home sausage or smoked meat can be added. Often it is filled with eggs and like to eat with white bread. In Russia, the classic lecho recipe has undergone changes and is better known as the delicious and flavored salad that is harvested for the winter. Usually cooked in this way lecho is used as a side dish to meat dishes, and is also added to borscht, soups, cabbage rolls or served as a delicious appetizer. The original recipe of Hungarian lecho contains only pepper, tomatoes, salt and sugar without adding onions, vinegar and other spices. In our country, the recipes for canning peppers and tomatoes are large. In addition to the main ingredients, they can include carrots, onions, zucchini, eggplant, garlic, vinegar, black ground pepper and other condiments. 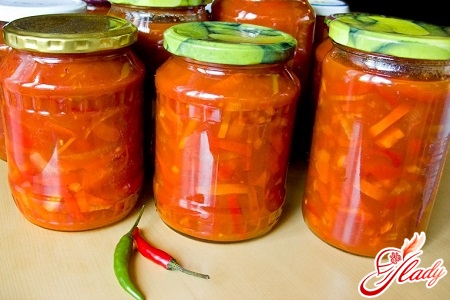 Lepcho cooking is a fairly simple process. Vegetables are crushed, a little bit on fire and poured on sterilized jars (if prepared for preservation). First of all, you need to prepare the products prescribed in the recipe. Bulgarian peppers should be selected ripe, so that the fruit was fleshy and had a smooth peel without spots. The use of unripe or, conversely, ripe vegetables will spoil the taste of the prepared dish. With suitable fruits, remove the stem and cleanse the seeds. Then pepper should be cut into strips or cubes. The degree of grinding also affects the taste of the final product. For example, some recipes provide chopping pepper in a meat grinder, then lecho has the form of puree and the taste differs from lecho, in which the fruit is cut into large pieces, which makes it possible to smell the flavor of each vegetable. Ripe tomatoes are cut into slices or passed through a meat grinder. Depending on this lech can turn out different in density. You can first remove the tomato peel, for which they need to pour boiling water for several minutes. The main secret of delicious lecho is not to digest it. It is necessary to remove it from the fire before the skin of the pepper begins to lag behind the pulp. Since lecho consists only of vegetables, the dish is low-calorie and dietary. In addition, it can be attributed to useful food. Lecho contains a number of vitamins (A, C, B) and trace elements (magnesium, potassium, sodium, phosphorus), which have a beneficial effect on the body. It is worth noting that all of the above is more relevant to lecho, which is prepared without the addition of vinegar. Its presence in the dish changes the taste of the products and can be used to sharpen and sharpen the dish. Vinegar also serves as a preservative if lecho is prepared for long-term storage. But in this form it is difficult to call a dietary product and it is not recommended to give to children and people who have problems with the gastrointestinal tract. Lecho, cooked with a prescription without vinegar, can be used as a light snack or garnish for second courses in the summer for the daily menu. But such lecho can also be stored well all winter in a cool place. You just have to follow some rules, and a tasty, healthy dish will be present on the table all year round. 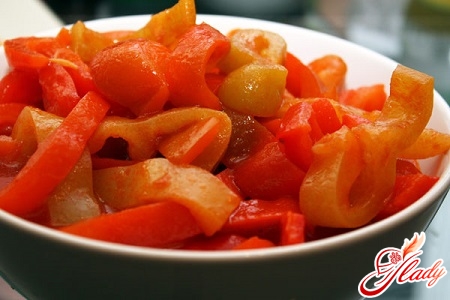 Recipe lecho of Bulgarian pepper and tomatoes without vinegar

This is the easiest way to prepare a classic lecho. The following ingredients will be needed:

To prepare lecho Bulgarian pepper differentcolors (do not use green) cut into squares or stripes. Tomatoes, passed through a meat grinder or crushed in a blender, put on fire and cook until the volume decreases by 2 times. Then put sugar salt, chopped pepper and cook for 20-30 minutes over a small fire, stirring. While lecho is cooked, it is necessary to prepare cans, it is good to sterilize them. This is a very important point in the preparation of products for long-term storage, especially when no additional preservative is used, as in this recipe. At first banks (for lecho it is better to take small capacity - 0,5 and 1 l) it is necessary to wash up carefully, check up for absence of cracks and chips. Then, the cans along with the lids are sterilized in one of the ways: above the steam or in the oven. After that, they are laid out lecho in a hot form. Bundle the lids, cover with a blanket and leave until completely cooled. Store in a cool place. Prepared in this way lecho can be immediately served to the table. For short-term storage of the product, cans with tightening lids. The proposed recipe can be varied by adding other vegetables or spices, vegetable oil. Very tasty, aromatic lecho can be prepared according to the following recipe.

Spicy lecho with onion without vinegar

The following products will be required:

Wash tomatoes, cut a peduncle, cuton 4 parts and to pass through a meat grinder or to grind in a blender. The resulting tomato put on fire, bring to a boil and simmer for 20 minutes. Peel onion and cut into thin rings. Bulgarian pepper washed, prepared and cut into strips or cubes. In the mashed potatoes add salt, sugar, sweet-scented and red pepper, bay leaf and chopped onions and peppers. Mix everything and simmer the vegetable mixture until softened pepper for about 15 minutes. Peel the garlic, pass through the press and add to the rest of the ingredients. Pour in the vegetable oil, bring to a boil and cook over low heat for another 5 minutes. After that, the finished lecho can be consumed or poured over sterilized jars, rolled up, cooled and stored.

Drying ceps in the oven, cooking

Minced meat for dumplings: a recipe for cooking