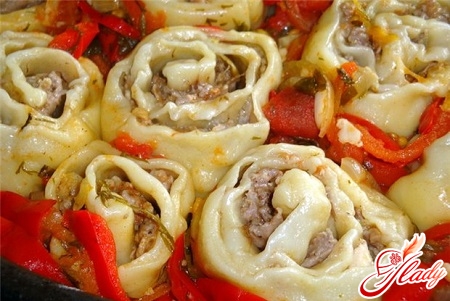 As though manufacturers of pel'menis did not praisetheir products, and with home pelmenkami not a single shop dumplings competition will not stand. And let us guarantee the excellent quality of ready-made ravioli, convince them that they are hand-stitched, that the mince does not contain any protein additives and flavor enhancers. All the same, homemade dumplings will be both tastier and better. However, the process of preparing this popularly-loved dish is so laborious that the temptation to buy store dumplings is very great. But do not rush to give up hand-made cooking delicious, juicy, fragrant and 100% natural home-made dumplings. Try to cook lazy dumplings. Yes, yes, lazy, it turns out, can be not only vareniki or cabbage rolls. The recipe for lazy dumplings also exists. Yes, not one, but several! By the way, different lazy dumplings can have not only a recipe, but also a method of preparation. However, we will not feed the nightingale with fables, but feed our households with ravioli. And let them be lazy, but they will be no less delicious than traditional ones. 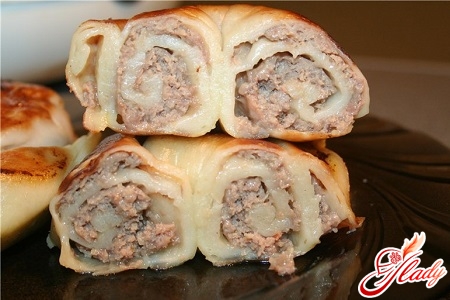 This recipe for lazy dumplingsimplies the use of a special form. Form for dumplings is a metal or plastic disc or a pentagon with honeycomb holes. It is thanks to this device that the procedure for making dumplings is greatly simplified - there is no need to mold each dumpling separately. Ingredients:

Preparation: After all, as in the traditional way? We roll out the ready-made dough, cut out circles from it, put minced meat for each, and then we patch each circle, forming a neat pelmenok. Using the form for pelmeni, we skip this step. But we start with kneading the dough and cooking the stuffing. Minced beans are transferred to a bowl, we add a crushed onion, egg, black ground pepper and salt, twisted in a meat grinder or crushed in a blender, (the latter we put to taste). Stirring. For the dough sift into a bowl of flour, put salt, pour in vegetable oil and break the egg. Gradually pouring water, mix a smooth, dense, but elastic dough. Then cover the dough with a food film or a towel and leave it for thirty minutes. During this time, gluten will swell, and the dough will become even softer and more plastic. On this coincidence of this method of preparation of lazy dumplings with the traditional method have been exhausted. Next, we need to roll out the dough, and we need to prepare two large layers at once. Then one layer is placed on a mold, sprinkled with flour, pieces of minced meat are placed in the holes closed by the test, and then everything is covered with another layer of dough. Sprinkle the upper layer with flour, roll it several times with a rolling pin, slitting the dough over the protruding edges in the shape. We lay the rolling pin, gently remove excess dough along the edges of the mold, turn it over and shake out the already dumplings. We boil them, laying in boiling salted water. 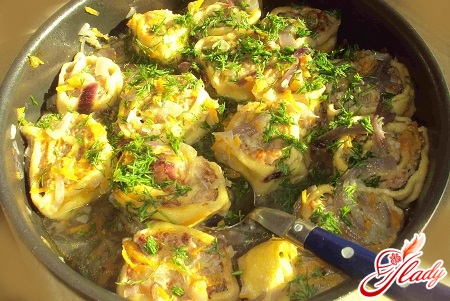 This way to cook lazy dumplings yeteasier. We do not need a form, and the recipe for the ingredients is different only by the presence of vegetables. From vegetables we will make a kind of pillow for our dumplings-rosettes. Ingredients:

Preparation: Mix the classic dumpling batter. We break eggs into the bowl, add water and salt and lightly beat this mixture. Now start gradually pour the sifted flour, kneading a very steep dough. Cover it with a cotton towel or food film and leave for half an hour in a warm place. During this time, the dough will become softer and more elastic. While the dough is resting, we prepare the filling. We twist on the meat grinder bulbs, combine them with minced meat and add eggs and chopped herbs. We put salt and black ground pepper to taste and mix well. In advance we prepare also a vegetable pillow for pel'menis. The recipe for its preparation is quite simple. We clean the onions and carrots, and the peppers remove the seeds and membranes. We cut all the vegetables with straw and alternately fry in vegetable oil to a crusty crust. We put all the vegetables in a deep brazier and start making pelmeni. Sprinkle the table with flour, spread all the dough on it and roll it into a thin layer. The thinner we roll out the dough, the more delicious the dumplings will be. Note that the dough layer should not be round, but elongated, because we have to roll it into a roll. Now put the entire stuffing on the dough and distribute it evenly throughout the formation. We wrap the roll and tie its edges. Next, just cut the resulting roll into pieces and put them in a brazier on a vegetable pillow. We put mini-rolls upwards. By the way, so that the meat juice from them does not flow out, the lower cut of each roll can be pinched. Fill our lazy dumplings with water so that it completely covers them. We put in a brazier a leaf of a laurushka, we add at desire spices, we cover with a cover and we extinguish pelmeni about half an hour. As you can see, making lazy dumplings is easy enough. In any case, their recipe practically does not differ from traditional home-made dumplings. Only the method of preparation is simplified. And what recipe did you like? By the way, lazy dumplings can not only be cooked, but also steamed or baked in the oven. Cook with pleasure! Enjoy your appetite and success in the culinary field! We advise you to read:

How to cook a duck in a multivariate: recipe

How to cook trout in a multivariate easily

Pepper stuffed in a multivarquet: the most interesting cooking recipes

Duck in Beijing: the recipe is not just for a restaurant!