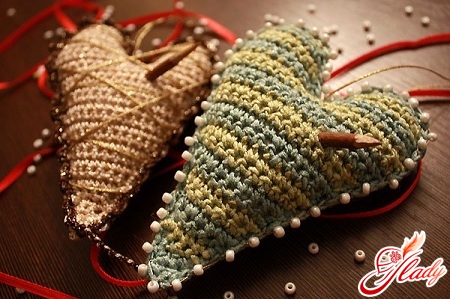 If a woman knows how to knit, then consider thathalf of the family budget, she is able to save. After all, what can we, needlewomen? And the family from head to toe to put on, and to itself favorite modnenkoe something to stir up, and the house, as a candy, to dress up. Moreover, we will save money on presents too! Here, for example, is it worth puzzling over what kind of valentine to present to your beloved, if you can pick up a knitting needle or hook, turn on your favorite movie and even touch the final subtitle before touching a touching souvenir. Yes, ladies, knitted valentines will give you the opportunity to combine nicely with useful. And how beautiful and sincere are these gifts! Shall we try?

Heart-case. Of course, we will not do anything in this case, and our heart should not open or close. But we use the principle of the case for our heartfelt souvenir. That is, it will be hollow inside and filled with sintepon volumetric heart-valentine. So, for work we will prepare cotton red or pink yarn, the third number hook and sintepon for stuffing. To make a similar valentine knitting we perform in stages. We start from the top of one of the halves, which we knit in the form of a cup. Two air hinges are closed in a ring and we tie them with six columns without a crochet. We make six increases and get a row of twelve columns. In the next row, six times, repeat the increase and the column without the crochet (only eighteen). The fourth row is tied with columns without a crochet (also eighteen). The last row of the cup - an increase and five bars without a crocheting we repeat three times (only twenty one loops). The last loop is not closed and we cut the thread, leaving a tail about fifteen centimeters. In the same way, we knit the second vertex of the heart. So, the last loop of the cup is on our hook. Now we put on it an open loop of the first half and continue the knitting in a circle with a working thread. First we sew seventeen columns without a crochet in the first half, skip four posts and knit on the edge of the second cup seventeen columns without a crochet (only thirty-four sticks). The tail of the first cup connects both halves from the wrong side, tying the four bars without the crochet, just those that we left in the previous stage. We get such a convex-concave eights. The last loop is not closed and we continue knitting with columns without a round on a circle:

Now we fill in unbound hearts with a sinteponand finish the work. We repeat the decrease and the column without the crochet six times. Then we sew twelve columns and report the filler. We continue decreasing, forming a sharp heart spike, close the last loop, cut off and mask the thread. 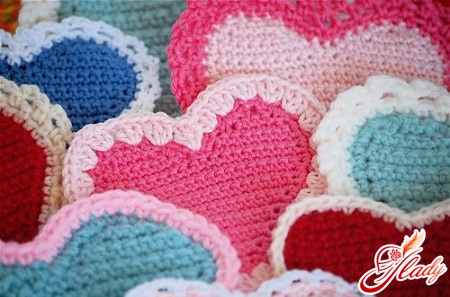 Such a miniature souvenir will be subdued even by the mostinexperienced knitters. So you can work out both at the same time, and fill your hand, and spend time with advantage, and make a sincere gift. So, for such express valentines you will need a crochet hook number 1.5 or 1.25 and red, white, green and black yarn "iris". Hearts are very small, but very cute. To link these cute valentines, you need only follow the description of the work.

Crop threads, hide the tails, tuck them into the columns of the right color. 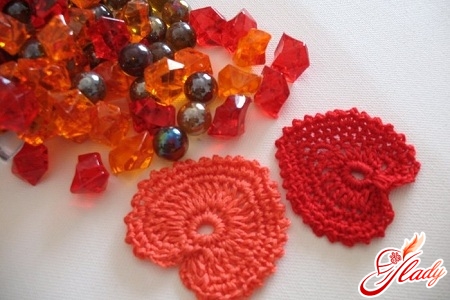 Other ideas of knitted valentines

Strictly speaking, any master knitter into come up with your own original heart. Agree that it is really easy and fast to connect such miniature valentines. For example, if you knit well, try to tie a two-sided heart in a Scandinavian style. Simply tie two canvases with a mirror pattern on the template, and then, folding them with the wrong sides, carefully sew the edges. Using the same principle, you can make an original silk heart in a knitted cover. First, cut out two silk parts from the heart pattern, sew them and fill them with a sintepon or cotton wool. Now, for the same pattern, bind two parts of any openwork with knitting needles by means of spokes. Attach the knitted details to both sides of the silk heart and connect them using a hook or a thick needle. In addition, try decorating the heart with pom-pomants, suspended on a crocheted lace. The main thing in such a valentine is to pick out a contrasting combination of silk and yarn. Or here's another idea. From a strong flexible wire, fold the outline in the form of a heart. Now, using a hook, tie the contour with columns without a crochet, ending this series with a connecting loop. And then choose any favorite pattern of knitted lace and continue tying the wire loop. By the way, if you make a large enough wire heart, then you can use it as a frame for photos. Well, for a very, very beginning, we offer a simple valentine heart, crocheted columns without a crochet. First, make a chain of three air loops, and then begin to tie it with columns without a crochet, making the reduction and addition in the right places and form a heart of the right size. If such a simple heart is supplemented with voluminous rococo embroidery, then it will look amazing and refined. And if you decorate a valentine with a small key on a cord, then it will acquire additional meaning and become not just a touching souvenir, but a kind of recognition. In a word, fantasize! The main thing is a hook or knitting needles, yarn and the corresponding mood - you already have it. And believe me, for the original valentine hook and spokes will be quite enough. The case for small - to translate the plan into life. Dare, and you will succeed! We advise you to read: