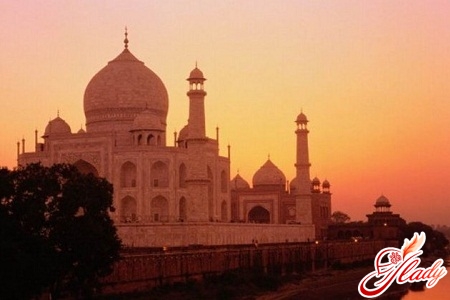 This country is not for nothing called a mystical andmysterious, bewitching and shocking, harmonious and contradictory. She, like the artist's canvas, excites and makes us stop admiringly to comprehend another meaning, invisible at first sight. And if you are in search of your way to understanding inner harmony, then you need to go on a trip to India.

Before you go on a trip to India(however, as in any other), you should make a route. India is a country that is not small and rich in sights, so it's best to indicate exactly what you want to see. Most tourists prefer traveling on the so-called "golden triangle": Delhi - Agra - Japur. And if you are going to India for the first time, then this route can be optimal for you. Nature lovers can choose to travel to eastern and southern India: the Periyar National Park, Bandipuh and the famous Kumarakom Bird. Those who are interested in the country as a center of Buddhist culture, it is best to go to the northern part of the country: Puri, Varanasi, Jansi and Sarnath. Direct flights from Moscow to Delhi are available from several airlines. Aeroflot and Air India are the most popular of them. But the cost of the round trip will cost you about twice as much as on the planes of the "Turkmen" and "Uzbek" airlines (the cost of round-trip ticket without fees and fees will be about 400 euros). But also these airlines have a significant disadvantage - they do not carry out direct flights to Delhi. Another point that should be considered when planning a trip to India is a visa. You can easily get it at the Embassy of India in Moscow for five working days. The cost of a single entry visa for a period of one month to six months is equal to 2800 rubles. 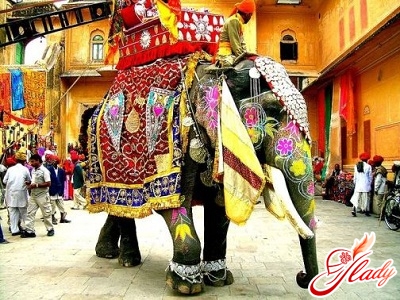 Europeans, unaccustomed to such a riot of colors,odors and unusual sounds, India is shocked at the first step. Or a glance, or a sigh. Delhi, or rather - its old part, close, screaming and stuffy, "falls" on tourists, headlong and engulfing in exotic fuss. It should be noted especially that the old part of Delhi is best studied gradually. The probability of cultural shock is too high. Getting to India, you like "fall out" of the usual reality and move into a kind of theatrical show, not entirely understandable, but appealing and inspiring. Bike rickshaws, motorcycles and mopeds scurry around the streets, cars move from row to row despite the laws of physics. And it's hard to talk about any rules of the road. It seems that they are not at all. Streets sink in the wild cacophony of signals, horns and sirens. The buses' roofs are crammed full of passengers and bags, the front doors of the buses do not close, because on the step, someone must hang and shout out the pedestrians literally under the wheels. Endless shops selling gold jewelry and statuettes of Buddhist gods and goddesses. Bright saris and bells on the ankles of women and girls, gracefully roaming cows, endless beggars and beggars. From such a kaleidoscope of unusual sounds, smells, pictures and sensations is no wonder and get lost. In this country, such a "lost" tourist is threatened with the possibility of becoming a victim of street thieves and swindlers. Therefore, travelers in India should follow a few simple tips: dressing, going on a tour, is best simply and discreetly, not to be hung with expensive photographic equipment and do not stop at every shop. Believe me, there will be plenty of places to buy souvenirs on your route. In Delhi, a huge number of architectural monuments, worthy of attention of tourists. Red Fort, built by the Mongol Emperor Shah Jahan. Here, hidden behind high walls of red stone, are shady gardens and marble buildings of palaces and numerous harems. In the time of British rule, many of these palaces were the residences of British rulers. And in our days - there are numerous museums, in the coolness of which you can hide from the hustle and bustle of old Delhi. The Jama-Masjid Mosque - the largest in India, can accommodate twenty thousand pilgrims under its arches. This mosque is considered one of the best examples of Mongolian architecture. However, do not forget that this is an active mosque, and when you look at it, try not to disturb the believers with your attention. The temple, built in honor of the gods Vishnu and Lakshmi - Brla Mandir - is also located in Delhi. One of the most famous temples in India, a great place to carefully read the basics of Hinduism. The largest temple of the Jain community in Delhi is Digambara Jain. He is famous for the fact that the Bird's Hospital is located in it, where sick and wounded birds are taken from all around Delhi. And the recovered "patients" are released every Sunday into the sky. Followers of Jainism consider it a sin to harm any living being. It is they who sweep the road in front of them, so as not to crush the living being, and cover their mouths with small handkerchiefs so as not to inhale even the smallest insect inadvertently. The choice of accommodation in Delhi is large enough, and if you have not booked a place in the hotel in advance, then you will have the opportunity to rent a room in any hotel for about seventy dollars a day. However, if you settle in a Tibetan colony on the outskirts of Delhi, the cost of living will cost you two times cheaper. 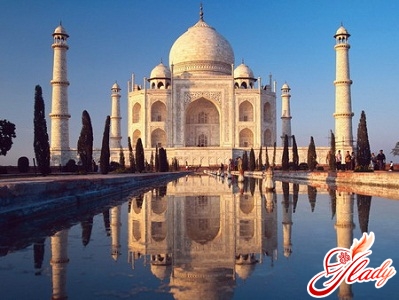 Travel to India can not be considered to be heldwithout visiting one of the seven wonders of the world, the famous Taj Mahal. The tear of love, as this burial vault is also called, is in the city of Agra. Shah Jahan ordered the erection of this beautiful masterpiece of Mongolian architecture as a token of love for his wife Mumtaz Mahal after her death. In the pre-dawn haze the snow-white Taj Mahal is especially beautiful, a huge number of tourists from all over the world "flock" to its foot to visit the shrine Itimad-ud-Daula. Despite the fact that the cost of the ticket is 750 rupees, wishing to see with their own eyes the certificate of love embodied in snow-white marble does not run low. Therefore, prepare yourself beforehand for the crowd. On Fridays, the Taj Mahal is closed, and if you took only one day to visit Agra, try not to make it Friday. To roughly estimate the amount of money you need, let's try to calculate the possible costs. In this paradise for gourmets and vegetarians, lunch will cost one and a half to three dollars. Traveling in India, in any part of it, you can easily hire a guide from the locals for about five to ten dollars a day to accompany the guide. And accommodation in a hotel of two people will cost about twenty or thirty dollars. Estimate how much money you can afford to spend on souvenirs and tickets for visiting attractions, and thus, knowing the duration of your stay in the country, you can easily calculate the budget of your trip to India. 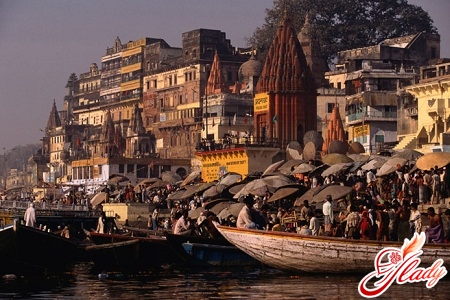 Ganges - the river of life and death

Another, undoubtedly shocking, ordinarytourist, but an important part of the journey through India, will be a visit to the ritual wharf - Manikarnika gat, located in Varanas, the holy city of the god-destroyer Shiva. This place is considered the most sacred place in India, to swim here in the Ganges waters alive means to wash off earthly sins, and to be cremated ashore - to get a direct hit in nirvana. Round the clock funeral pyres on the pier burn. And the numerous tourists, sailing through the waters of the Ganges, with astonished eyes, look at them and the living, immediately taking a bath in the sacred river. The bizarre plexus of life and death appears in all its diversity precisely in this picture. However, Hindus are easier to treat death, considering it only a temporary stop on the long journey. In neighboring ghats, life goes on and on, every evening on the banks of the Ganges, numerous monks come out to perform ritual ablutions (puja) in honor of the life-giving goddess Ganga. In the mornings, numerous believers flock to the coast to wash away their sins and drink the purified water. In no case should you do the same: about unsanitary conditions prevailing in India, it is better to learn from numerous guides than from your own experience, "picking up" some kind of E. coli. From the tap in the hotel you can not drink water, even if you boil it. Water for drinking, as well as for cleaning teeth, buy in bottles, while carefully watch that the neck of the bottle was sealed. Immediately, next to him, on the bank of the caste, the laundresses beat off and scrape off the coastal stones on clothes taken from the deceased before the cremation. By noon the whole coast of the Ganges is dotted with colorful silk sarises, making it look like a sheet of Whatman, painted by a talented self-taught artist. On the many squares of big and small cities in India you can see, perhaps, the most beautiful action. Dance of street dancers. The beauty of Indian dances can conquer and fascinate even the most indifferent. Dance movements have names - "come," "I love you," "I'm sad." This is a kind of meditation, capable of introducing any kind of trance of any viewer. Smoothness and accuracy of movements, gestures, music, even looks. Whichever travel route for India you choose, stopping at least in one city more than a couple of days, you run the risk of staying there forever. No, no one will be forced to stay, just a special philosophy of life of Indians is able to turn a short trip through India into a permanent stay in one of its many cities. There are many such "former travelers" here. All of them, subjugated by the ineffable atmosphere of harmony and correctness of what is happening, remain to at least a moment achieve the promise of enlightenment promised by numerous beliefs - to see the whole world in one flower. Therefore, we must find the strength and, shaking off the dust of the Indian roads, go home, feeling sorry for the short-term vacation.

Jerusalem: sights of the holy city