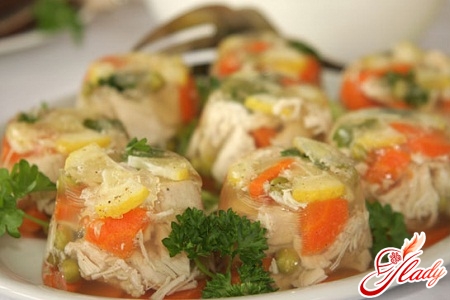 You have a desire to learn how to cookchill from a chicken? It's easy, but very tasty. It turns out to be more beautiful and transparent than from meat, besides, it takes much less time to prepare it.

Preparation: The chill from one chicken bought in the store stiffens very badly. Therefore, it is better to use old poultry or a wiry cock, because they should be cooked for a very long time. But you can get out of the situation as follows: add the beef knee to the chicken. It will help the chill to acquire a gelatinous consistency. Meat must be thoroughly washed and put in a large saucepan, pour water so that it covers it above it by 10-15 centimeters. Put on a moderate fire. Before boiling begins to form a foam, which must be permanently removed, so that the chill from the chicken is tasty. After removing the foam, put the peeled vegetables, bell pepper and bay leaf. When the broth boils, reduce the fire to a minimum, continue cooking meat, periodically removing the emerging foam and fat. The chicken from the chicken is prepared for a long time - until the meat completely separates from the bones of the bird, and the veins on the knee will become jelly and transparent. When the meat component is completely ready, get it out of the broth, removing the pan from the fire. With the chicken remove the skin, remove all the bones, and the meat spread out in flat trays, decorating the top with slices of boiled carrots. Broth salt, pepper, add the garlic, passed through the press. Then broth, straining through a sieve, pour into the trays with meat. Wait until it cools down, then put it in the refrigerator, covered with lids or foil.

Preparation: No less tasty chicken with gelatin. To cook it, you need to wash the chicken and divide it into four parts. Remove the fat. Put the chicken in a saucepan and add plenty of water. Add the peeled onion, carrots, bell peppers and bay leaf, salt. Chicken cold is cooked for a very long time. But, to make it beautiful and tasty, you need to remove all the foam in time, which will start to form when boiling. When the broth is very boiling, reduce the fire to a minimum. Cover the pan and leave to simmer for two hours. Periodically, the intensity of boiling should be checked: the lower it is, the better. After about two hours, remove the pan from the fire, get the chicken from the broth and let it cool. Broth strain, removing from it vegetables and scraps of chicken skin. When the chicken cools, remove the skin from it, remove all the bones. Meat to disassemble into pieces and put on the bottom of special molds. Clean a small onion and carrot. Pour the broth into a glass and pour gelatin into it. Stir well. Divorced gelatin pour into filtered broth. Stir thoroughly. Onions and carrots cut very thin rings and half rings. Put them on top of chicken meat in molds. Broil again bring to a boil, but do not boil. Carefully pour them a prepared chicken. When the chill cools down to room temperature, it should be put in the refrigerator for final hardening.

3 recipe for chicken from chicken

To taste chicken from a chicken,show skill and patience. For this, pour about 7 liters of water into the pan. Put the washed and chopped chicken into it. Chicken legs are necessary for the ligament (instead of gelatin). They should first be dipped in boiling water, which is in a separate container. Immediately remove all the yellow film from them, cut off the claws. Fully processed paws put in a pan with chicken. Add peppercorns, bay leaf and cloves. Cook for about two hours, constantly removing grease and foam. 30 minutes before removing the pot from the fire, add the broth to taste. When everything is cooked, take the meat out of the broth, cool it and completely separate it from the bones. Spread it on trays and pour the broth. Put in a cool place to freeze. You are offered three options for cooking chill from a chicken. Which one to choose is a matter of taste and desire. But the chicken chill has a more delicate taste than its meat brother. Therefore, it is worth taking the time to try this dietary dish. We advise you to read:

How to cook a duck in a multivariate: recipe

How to cook trout in a multivariate easily

Duck in Beijing: the recipe is not just for a restaurant!