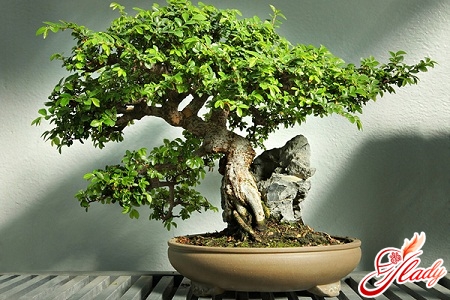 The alien from Japan, the bonsai, is no longerrarity. Many houses have vases with miniature trees. They settle on the windowsills, put on coffee tables, decorate them with winter gardens. However, not everyone knows how to properly care for this miniature tree. Here we will tell you how to grow bonsai and take care of it at home. Cultivation of bonsai is not subject to every person. This is an activity for neat, thoughtful and patient people. Strict canons, produced by centuries, clearly dictate what should be the crowns and trunk, in which containers must be planted trees depending on the size. And bonsai can not be formed once and for all. The tree is alive, it continues to grow and changes every day, which means it requires regular care, constant transplants and haircuts. Of course, deviations from the rules are permissible. This is what allows you to create masterpieces. But such experiments can only be afforded by a master who perfectly knows the techniques of growing miniatures. 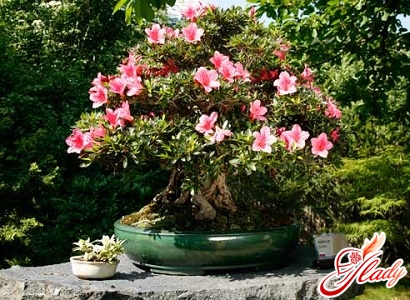 Many styles of bonsai have been developed, but in all of thempresent general requirements to the crown. It should be conical in shape or divided into horizontal compact tiers. Needles and foliage in each tier should be thickened as much as possible. Such rules are due to the laws of growth of trees. If you observe them, all branches - both lower and upper - receive the necessary amount of light, the crown itself is ventilated, and each level has its own microclimate. And this contributes to the vitality of growing bonsai. Formation of the crown is a painstaking and lengthy process. After transplanting the trees taken from the natural environment into the container, the first haircut is immediately performed. To do this, leave the branches that fit into the image of the future bonsai branch, and cut off all unnecessary ones. Over the next few years again, only the Saami are chosen from new shoots and cut off the rest. Cutting a tree in this way, you can create even a bonsai in the style of a "half-cascade" or "cascade" from an upright tree. You can specify a certain direction of growth branches. To do this, they are pulled back with the help of cargo, wire or tie the branches to the roots. The tree formed in this way also requires regular haircuts. They are needed not only to maintain the beauty of the silhouette, but also to "redistribute" the energy between weak and strong branches. The strongest branches of the tree, as a rule, are the upper ones. And the lower ones, usually, are weaker than them. The branches located outside the crown are much stronger than the inner ones. The first time bonsai in the season is cut at the beginning of spring, after wintering. Subsequent haircuts only shorten the branches that have broken out beyond the boundaries of the silhouette. The frequency of these haircuts depends on the growth rate of needles or foliage. Technology and mode of haircuts for each breed is individual. If you are interested in how to grow bonsai from pine, then you need to know the following. Pine is cut in several stages in the spring. For the first time, the weakest branches are cut off, then the branches of medium strength, and a week later they work with the crown. On each shoot, one or two "candles" are left. And those that are located in the horizontal plane, the rest - the lower and upper - are cut. They cut off all old needles, partially cut off a new one. Some of the new needles are left to the point that the branches do not die. On strong branches, you can save five to six pairs of needles, on weak branches - for eight to ten, and on the top to five pairs. This procedure promotes the redistribution of energy between the branches and the reduction in the size of the needles, which gradually become more proportional to the branches and trunk of the miniature tree. You should know that the pine in the care - one of the most difficult breeds. Its dense, squamous crown, the lower branches of which rapidly die off, it is always necessary to stimulate the formation of new growth points inside the crown. The ability to grow bonsai from coniferous trees in the east indicates a very high level of master. If you are a beginner, but you are interested in how to grow bonsai at home, you should start with juniper Chinese, which is easier to take care of. It is good to study on unpretentious deciduous plants - elm or ficus. 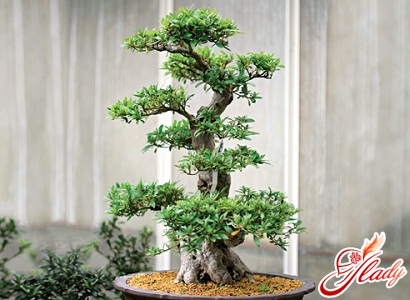 Bonsai from coniferous species, which is alreadywas formed, transplanted every three to five years, deciduous - every three years. Unformed bonsai is transplanted: coniferous once in two to three years and deciduous in one to two years. The transplantation is performed before the beginning of active growth, in early spring. It is important to change the capacity to a new one, which should be slightly deeper than the previous one and a couple of centimeters larger in diameter. Transplanting, you need to cut excessively overgrown, old and damaged roots, then shake the ground along the edges of the earthy coma and renew the earth. Earthen to whom before planting should be allowed to dry. After the transplant, bonsai should be watered abundantly. To properly take care of bonsai, you should learn as much as possible about the characteristics of the tree being grown: how quickly it grows, how much light and water it needs, what humidity and temperature are needed. It should be remembered that there are so many details of the formation of bonsai and care for it that it is possible to comprehend them only in practice. We advise you to read:

Kalanchoe Kalandiva: caring for the plant

How to water the orchid correctly?

Orchid Dendrobium - "star" in your house

Heavy fence: bushes in the country