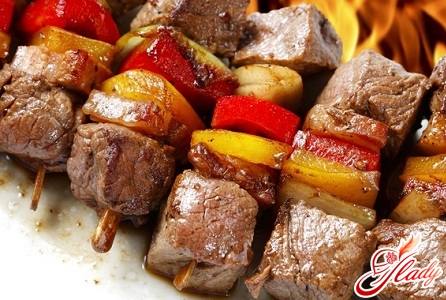 Shish kebab from pork is considered the most loved andpopular throughout our country. The secret of how to cook shish kebab from pork is hidden in the simplicity of marinating meat and the ease of its preparation. After all, the pickled meat even for 30 minutes turns out to be very tender and juicy, and about the taste you can perform whole dithyrambs, because nothing compares to a dish cooked on charcoal. And, of course, everyone has their own favorite recipe for how to cook shish kebab from pork. After all, the recipes of this dish are a great variety - from a simple marinade of onions, lemon and pepper, to the most unimaginable - from wine, exotic fruits and rare spices. Having manifested your imagination using such products as onions, garlic, aromatic spices, fresh herbs, adzhika, juices and many other ingredients, you can give an unforgettable taste and aroma to the pork shish kebab. However, do not think that cooking shish kebab is a very easy process, it requires knowledge of some tricks and secrets. Such secrets will help to save you from failures, which can disappoint you as a novice cook. Before you cook shish kebab from pork, you need to choose the right meat. 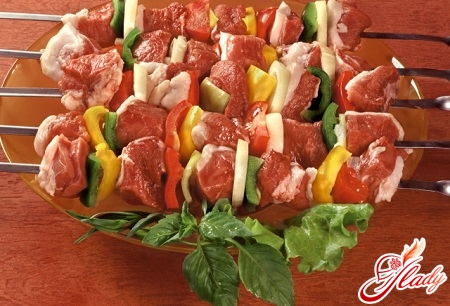 Choosing meat, you need to remember that how freshand it will be high-quality, so soft, juicy and delicious will the dish. For cooking shish kebab, you need to choose only fresh and chilled meat, in order to make the dish juicy and fragrant. If you can not buy chilled pork, then you can use it in a frozen form. In this case, the meat must be thawed in the refrigerator in the lower compartment at a temperature of more than 5 degrees. For pork to retain its taste and nutritional qualities, it must be thawed slowly and neatly. From the microwave oven when defrosting meat should be discarded, as the finished meat after such defrosting turns out to be dry, tough and not tasty enough. When choosing meat, you need to pay attention to its freshness. Buy it better in the market in the morning, because at this time it is the fresher and not the winded. The selected piece must be carefully examined from all sides. Quality pork should have an even pink color on the cut, and the cut itself should be uniform and glossy. Then you need to gently press your finger on the cut of meat, the resulting pit should straighten straight away. Next, the meat should be sniffed, it should have a pleasant and slightly sweetish smell. If you do not want to buy boar meat, ask the seller to cut off a small piece of meat, hold it over the flame of a match or cigarette lighter and then smell it. Boar meat will have a sharp and unpleasant smell of urine. Such a piece is not worth buying. For a shish kebab, it is best to choose a pork neck or a neck. Ribs are very delicious. But if you choose a ham or a shovel, then the dish can get dry and tough. When choosing pork, it is better not to take too fatty a piece, since a large amount of fat can negatively affect the taste of a shish kebab.

Selection of coals and frying meat

Before you cook a shish kebab, you needPrepare coals for frying. For the preparation of shish kebab from pork, coals from such firewood as birch, aspen, apple, cherry, mountain ash and linden can come up. Of course, the finished coals can be bought in the store, but the coals cooked independently will be more fragrant. Before proceeding to roasting the meat, the coals must be well heated. The hot coals should burn all over the surface with a uniform reddish glow, and the ash should only cover it lightly with a thin layer. Shish kebab can not be fried until the tongues of fire are extinguished. If a fire breaks out during frying, it must be extinguished by sprinkling with water, wine or the remaining marinade. When frying shish kebab, we should try to turn the skewers with meat evenly and regularly. This is to ensure that the pork is cooked from all sides and a beautiful crispy crust is formed, which will protect the shish kebab from burning. If it happened that the meat began to burn or dried, you just need to smear or sprinkle the pieces with a marinade or a mixture of water and wine. With regular sprinkling, pork will not burn, but will acquire an additional flavor and juiciness, while the meat inside will remain gentle and soft. 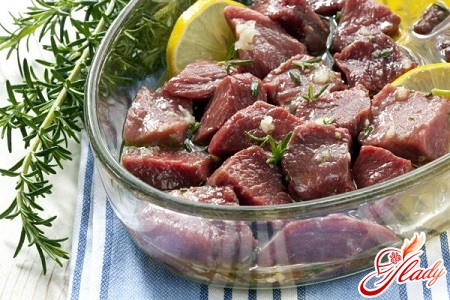 Shish kebab without marinade simply can not exist. The taste of the dish depends on how correctly it is cooked. Recipes marinade there is a lot, you can find for every taste. Those who want to cook a really tasty shish kebab, pay almost as much attention to the marinade as the choice of meat. In addition to onions and spices, which are used in marinating pork, dry wine (red or white), kvass, beer, vegetable or fruit juices is added to the marinade. Many people use kefir or mayonnaise to prepare this dish. Previously, vinegar was used to marinate meat, perhaps because it was affordable and quickly acted. However, pork marinated in vinegar, it turns out not so juicy. You can replace it with lemon juice. Also, attention should be paid to salt, which should not be added to the marinade, as it will make the pork stiff. Salt the ready-made dish can already be on the table. Types of marinades:

Marinade based on vinegar It will take:

Pork cut into pieces. Onion cut into rings of 0.5 cm thick. In a deep bowl or pan, stir well the meat, onion, black pepper and salt. In a liter jar you need to dilute vinegar with water so that a slightly acidic solution is obtained. Part of the solution must be poured into the meat and mixed thoroughly, and the remaining water is poured onto the meat so that it is covered with the marinade. On top of the meat, it is better to put pressure on the meat so that the meat is better to be marinated. Leave to marinate for at least 4 hours. Marinade from yogurt It will take:

Cut the meat into pieces and put some on the bottomenameled dishes. On top of the meat put chopped onions, chopped finely coriander, salt, add spices and pour kefir. Then again put a layer of meat, onions, coriander, seasonings and yogurt. So the meat should be marinated for at least 24 hours in a cool place. Marinade with mayonnaise. It will take:

Wash meat and cut into pieces. Lemon cut into slices 0.5 cm thick. In a separate bowl, combine cumin, coriander, ginger, basil, cinnamon, bay leaf and pepper with olive oil and pour into pork with lemons. Mix thoroughly, cover and put in a cool place for about 10 hours, stirring occasionally. Marinade fast It will take:

Pork cut into pieces and put in a bowl formarinating. Peel onion and rub through a meat grinder. The resulting onions mix with meat and add pepper, saffron, bay leaf, salt and mix again. Pieces of meat strung on the skewers and fry for about 20 minutes. Shish kebab from pork in Georgian It will take:

Pork cut into pieces and mix with pepper andsliced ​​onions. Put the meat in a pickle and on top of the meat put the load. Leave to marinate in a cool place for 6 hours. String pieces of pork on a skewer, alternating with onions. Finished shish kebab decorate with onions, tomatoes and greens. Marinade on beer It will take:

Pork cut into pieces of the same size. Fold in a bowl and mix with sliced ​​onions, salt and pepper. Pour the meat with mayonnaise and mix well. Put in a cool place for 2 hours. 15 minutes before the preparation, pour the meat with beer and mix. Leave for 15 minutes. Then strung on the skewers and cook. While the shish kebab is ready, it is necessary to prepare the sauce. To do this, the onions, which remained in a pot with marinade, fry until ready and mix with mayonnaise and ketchup. Marinade on pomegranate juice It will take:

Pork meat cut into portions. Cut the onion into rings 1 cm thick. Cut the greens finely. All the ingredients put in an enamel pot, salt, pepper and pour pomegranate juice. Put in a cool place for 4 hours.

The preparation of shish kebab from pork contains certain rules, following which one can achieve perfection in the creation of this dish.

Chicken in sour cream: with garlic, in a frying pan, stew

Pilaf in a double boiler: a recipe for cooking in a multivark

Lazy dumplings: a recipe for cooking

Pancakes with chicken and mushrooms: no one will refuse!