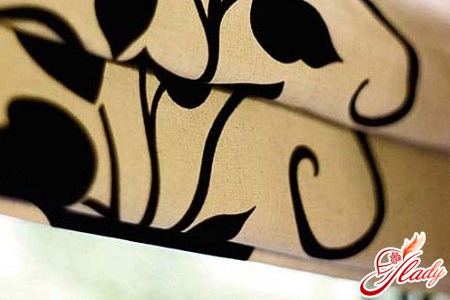 "Sails and caravels, behind the stern track white-white ..."And where does the Roman curtains - you ask. And besides, that this element of window decoration has got to us neither much nor little from Roman seafarers. The very curtain with all its grace is simple enough (if not to say "rude") in performance. It is made on the principle of a ship's sail: a canvas fixed on the mast, which can be raised or lowered by means of a special device. If everything is so simple, - you will say - how to sew Roman curtains yourself? And it is very easy, - we will answer and we will offer you several variants of the Roman curtains, made without special work (but with a certain degree of diligence!).

What do we need for this?

Keep in mind that you will need much less fabrics than for traditional curtains, but more accessories and additional materials:

Choose a cut, stock up everything you need andproceed to make curtains. Yes, by the way, it is the Roman blind - the most affordable way of expensive textile design. Because with a minimal expenditure of tissue (and it is here that it is), you can afford and buy expensive fabrics. Well, what kind of fabric to choose, decide for yourself. If you want your Roman blind to protect you from the sun, choose fabrics that are dense or specially processed from the underside ("black out" fabrics). Semitransparent fabrics on the windows will hide your everyday life from prying eyes, but they will let light into the room. Pay attention to the picture: in the Roman curtain it will look especially advantageous. And fabrics with an interesting or complex weave of threads can also be a very effective option. Well, now, having decided on the fabric and having acquired all the necessary materials, we proceed to the selection and manufacture of the model.

The first model. The simplest and easiest option

It is a model without pins, but with a weights that will keep the horizontal line of the bottom edge of the curtain. Its advantages - ease of execution, softer folds and a relaxed look.

This model is most suitable for curtains made of plain fabrics with a loose structure. The main condition of its neat appearance is the precision of cutting and free stitching (not a tightening cloth). 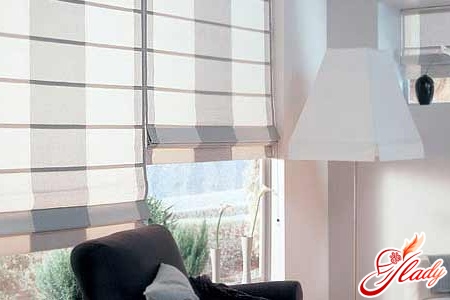 The third model. The most popular option

This option is very popular,because it's quite easy to sew a Roman blind in this way, but the result will be more effective than in the first model. For it, absolutely any fabric is used for the base, but the lining must necessarily be combined with the base in tone.

The fourth model. Variant with a figured bottom

There are no special instructions here. To execute such a Roman curtain can be based on any model. The only difference is the figure bottom, carved with festoons or a patterned line. For this model, instead of instructions, only a few recommendations are needed. If you want the curly bottom to look out of the folds of the curtains during assembly, then proceed as follows. When cutting, divide into the section the total height of the curtains, so that the first section is measured from the bottom of the figure edge. The lowest rings for the cord are not sewn to the weighting agent, but to the lower kulisk with the rod. If you sew a curtain with a peeping edge along the model of the first model (without twigs), then make the edge wider - not ten, but twenty-five centimeters.

How to fix Roman curtains?

Lock Roman curtains can be either insidea window aperture, or on its edge. In accordance with this option, calculate the consumption of tissue, and make a pattern. The first option is appropriate in the event that your window has too wide windowsills or if the Roman blind is used in conjunction with conventional curtains. In this case, it is located very close to the glass and leaves the sills free. The second option is preferable if your window has flaps and opens all along its height. In this case, the curtain is cut out so that it covers the wall (slopes) by five to ten centimeters on either side of the window. The process of attaching the curtains to the window looks like this:

Now, when you remove the cords from the hook, the curtaindescend. That, strictly speaking, that's all. Knowing how to sew Roman blinds with your own hands, how to fix them on the window, you can stylishly and effectively decorate windows in any room in your house. And to say "thank you" to the Roman mariners, thanks to which the art of making ship sails magically helps to transform our house. We advise you to read:

Bracelets with their own hands of beads: "Beads" and "Sea Waves"

Armchair-bag with your own hands is easy to make

Hair accessories for your hands - it's stylish!

How to choose a mattress

The recipe for a bomb for a bath. All ingenious is simple

How to tie the tracks with knitting needles?