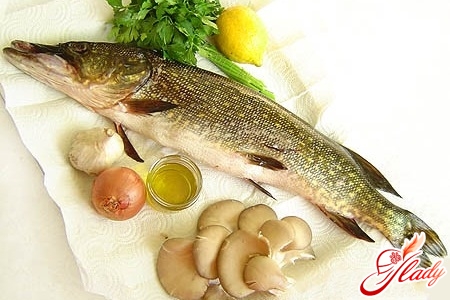 Do not you like pike? You just do not know how to cook it! An evil pike is a predatory fish. Always hungry, she picks on the river and lake open spaces in search of the next prey. Rapid, merciless, tireless, she does not know other enemies, except man. A man, appreciating the size of this fish, quickly made it a popular point of his fish menu. It's a pity that only the pike meat (thanks to its mobile way of life) is dryish - neither excess fat in it, nor excess juice. Here we are refined, thinking about how to cook pike: in the oven, in a saucepan, in a pan, stuff it or make fish patties? So let's look at some options for cooking pike, when it turns out it's just "lick your fingers."

Well, what can you cook from pike in the firstif not fried fish? This is the most common recipe for pike cooking. The result is a juicy fish with a crispy crust. For such a roasted pike, it is best to take small specimens (up to two kilos in weight). Ingredients:

Preparation: I clean my fish of scales and gut. We cut off the head, tail and fins. Thoroughly wash the carcass from the inside and dry it. Then cut the fish across the carcase into portions (about two centimeters thick) and sprinkle them with lemon juice. Prepare flour for breading: mix it with salt (somewhere a teaspoon of salt for a glass of flour) and spices. As spices, you can use ready-made fish seasonings. Also, a spoon of breadcrumbs or mango can be added to the flour. Then put the frying pan on the fire, pour in it the vegetable oil, which should be so much that the pieces of fish placed on the frying pan, "drowned" in it almost half. We let the oil get hot and quickly put into the frying pan the pieces of pike crusted in breading. We lay them loosely and fry first (ten seconds) on high heat, and then three or four minutes on average. And so fry fish from both sides. Everything - fried pike is ready! You can start eating. Delicious?

The Tsar's Cooking! It is made from a whole pike with a head and a tail! It looks amazing, and it's tasty as well. Ingredients:

How to cook stuffed pike? We clean the fish, wash it, gut, cut out the gills and get a towel. For the filling we soak the rice, boil the eggs, wash and chop finely prunes. Mix the chopped eggs, swollen rice, prunes, a tablespoon of soft butter, a little salt and white pepper. Lackily fill this mixture with the abdomen of the fish and sew it over the edge with an ordinary harsh thread. Bake in the oven for about an hour and a half, put in a brazier (curling the ring) or on a baking sheet. Before baking, cover the carcass with a mixture of butter, spices and ground biscuits. 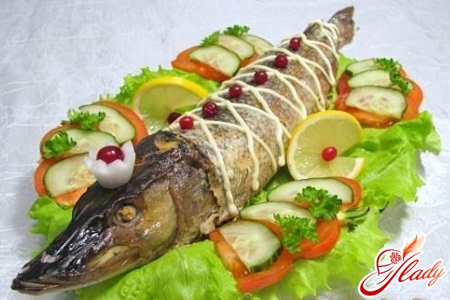 There is a lot of options for how to cook pike in foil. But we offer you the easiest and fastest. Except that it's quick and easy, it's also delicious! Ingredients:

Preparation: Before you cook pike in foil, clean fish carcass, gut, cut out the gills and wash. From the outside and from the inside, salt it with salt and spices, and then grease it with mayonnaise. The abdomen of the pike can be stuffed with greens and slices of lemon, but you can do without it. Prepared pike lay on foil, spread on a baking sheet and oiled. On top of the fish, spread the rings of onions and tomatoes and wrap the foil, tightly "wrapping" the fish. How to cook pike in foil to make it juicy and delicious? It must be ensured that the juice does not leak out of the foil. First, you should bake the fish in wrapped foil, and after about twenty minutes, gently unfold the fish and bake the fish for another ten minutes. During this time, she will have time to brown and will look even more appetizing.

This is an excellent opportunity to cook a large pike. Fish cutlets from pike are juicy and aromatic. And how delicious! And, in hot, and in a cold kind. Ingredients:

How to cook pike patties? Purified and gutted fish are cut on the fillets and released from bones and skins. Cut into pieces and twist on the meat grinder twice. Onion and lard - also through a meat grinder. Mix the twisted fish with bacon and onions and set aside. Bread crumb, put in a bowl and pour milk. As soon as bread absorbs milk, knead it, squeeze it and add it to the stuffing. Minced salt, put some pepper and mix well. We form minced meatballs and on both sides in vegetable oil. It will be more juicy and tasty if at the end add a little milk or water to the frying pan and steamed fish patties under the closed lid for ten minutes. "Spicy Plov" in the oven

A sort of culinary sketch on "how to cook deliciously pike". Or a free interpretation of the pilaf's recipe from fish. For this method of pike preparation, we need the following ingredients:

Preparation: We divide the fish, free from small and large bones and cut into pieces of medium size. We rub the pike with salt and spices and put it in a greased with butter. Small pieces of oil we put between pieces of fish and from above we fall asleep washed rice. On the rice lay out the vegetable fry from carrots and onions. Fill it all with water so that it measures one centimeter and a half of our "pike pilaf". We put the brazier in the oven and wait. We determine the readiness for the softness of rice: as soon as it became "edible", we take the pilaf from the oven and serve it on the table. Serve hot, seasoning with fresh herbs and lemon. Prepared in this way, the pike will not seem dry (the oil does its job!).

Very juicy fish with a delicate taste. If you have never cooked a pike for this recipe, be careful when taking the sample. It's not even an hour to swallow a tongue - it's delicious! Ingredients:

Preparation: If you did not get the finished fillet, then before you cook the pike according to this recipe, the whole fish should be "properly" divided: clean, gut, remove the spine and costal bones. To do this, it is necessary to cut the carcass along the ridge, and cut the fillets from the back to the abdomen. Finished fillet cut into finer chunks. After that, each piece of fish rubbed with salt and spices and fried in hot oil. Fry only on one side (where the skin is) giving the skin only whiten. We lay pike pieces in a high brazier. Diced onion rings put on top of fish and all abundantly watered with sour cream. We close the brazier with a lid, put it on the fire and extinguish the fish for about seven minutes. If necessary, pouring water, we bring the pike to readiness. As you can see, it is not difficult to answer the question what can be cooked from pike. It is better to fry a small fish carcass, to put out medium-sized pikes or to bake, and from a large pike it is possible to make excellent cutlets. And if you are confused by the possible "dryness" of the pike, then you will have nothing else but to cook pike in sour cream. Cook! We advise you to read:

Cauliflower fried recipes for adults and children, healthy and sick

Recipe for homemade hedgehogs with rice