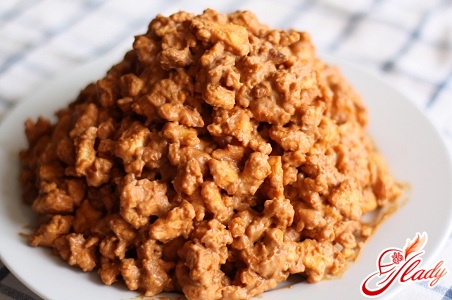 Cake Anthill is one of the most famous cakeshome cooking. Many call it a cake from childhood, which is not surprising, because this cake was unusually popular in the glorious times of the legendary Soviet Union, and for many and many girls (now grown-up) it was he who became the first culinary, or rather, confectionery experience. Cake "Anthill" is prepared easily, outwardly simple, tastes good, syten and universal in its purpose. Since this cake can be made just like that, because it tasted good, you can cook it on the occasion of any celebration (also will go "with a bang") or for friendly girls' gatherings (and at the same time discuss which of the present and how it is cooked). That's it about this - how to prepare the cake "Anthill" - we'll talk with you. The simple process of preparing such a wonderful cake can be conditionally divided into stages, and each of these stages hides some secrets and nuances. So, we are preparing a cake-nostalgia, a cake "for any occasion", a cake for all time - an anthill cake.

First, of course, as for any othercake, we will prepare the dough. Usually an anthill cake is made from a short pastry that is prepared on its own. True, some not very zealous housewives do not trouble themselves with kneading the dough and baking the half-finished product for the cake "Anthill", but they take ready-made friable cookies. This, by the way, is one of the nuances of this stage: that is, you can not cook the dough at all, but use the products of the confectionery factories. However, for a real cake "Anthill" (which is "as in childhood"), you need to make a dough. And for this we need the following ingredients:

Preparation: White wheat flour is sieved through a fine sieve. By the way, if you do not practice this technique in your culinary activities, then you risk getting tasteless or poor-quality baked goods. Not only that sifted flour is enriched with oxygen (and this fact also affects the excellent quality of baking), so all sorts of garbage (grains, villi, lumps) remains in the sieve, and does not migrate from the bag with flour into the dough. So, we sift the flour, and then add to it the softened margarine, sour cream, sugar, salt and baking powder. By the way, never give up such an ingredient as salt for sweet baking. In such products, the salt of its own taste does not pass to the test, but it "works" as an enhancer of taste. That is, for example, you can bake a biscuit without salt, or you can add a pinch when whipping eggs. In the second case, the biscuit will have a more saturated and "bright" taste. So, adding all the other ingredients to the flour, mix the dough. You can, of course, use a mixer and screw-blades for this, you can mix a dough with a spoon, but it's best to do it with your hands (clean, of course!). Experienced cooks say that dough can absorb the energy of the world around him, including the energy of human hands. How exactly this fact affects the quality and taste of baking - we do not understand, but here is the fact that this fact takes place - it is checked! So, knead the dough until we get a homogeneous, dense, smooth and pleasant to the touch mass that will not stick to the hands and sides of the bowl. If in the process of kneading you understand that flour is not enough, then sprinkle it a little more: the amount of flour can vary depending on the fat content and density of sour cream. After kneading the dough, we remove it in the fridge and begin to prepare a cream for our cake. 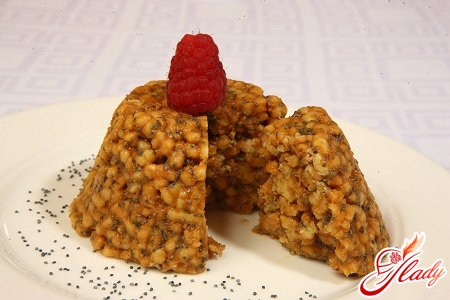 Preparation: If you are going to prepare a real cake "Anthill", then the products for the cream should also be taken real. Namely: natural butter without any vegetable additives and the present whole condensed milk. Therefore, when buying these products, carefully read the inscriptions: the composition of the butter should include only milk cream, and a jar of condensed milk must have the inscription "integral". So, first you need to cook the condensed milk. We take a saucepan in height more than the height of a can of condensed milk. We put condensed milk in it (in a closed metal jar) and pour it with water so that the jar is completely covered with water. Now put the pan on a small fire and cook condensed milk for a half-two hours (no less!). In the process of cooking we watch water, which, of course, will boil away, and periodically poured water into a saucepan. After the necessary time, the pan is removed from the fire and the condensed milk is cooled under cold running water. If you are boiling condensed milk beforehand, then just leave the jar to cool down at room temperature. Important! Do not try to open a hot can with condensed milk! The condensed milk in it is under pressure, and you risk much (and it is painful!) To burn yourself with hot condensed milk, which the bank will literally spit out as soon as you pierce it with a can opener. Now we will prepare the cream directly. To do this, let's take butter, which should be slightly melted and softened, and a bit of it will be blown out by a mixer at medium speed (literally a few seconds). And then, whilst continuing to whisk, in a few tricks, add the fully cooled boiled condensed milk to the butter. When the mass becomes homogeneous and acquires a pleasant light brown or beige color, the cream can be considered ready. We remove the cream in the fridge and proceed to the next stage, namely: we begin to prepare a sandy semi-finished product for the cake and collect the "Anthill" itself.

Prepare the semi-finished product by preparing the test forbaking. To do this, remove it from the refrigerator and cook a meat grinder, from which we remove the knives and put the grate with wide openings. Baking tray baking paper and (or) grease with vegetable oil or margarine. Oven will also include in advance. Now take the dough and in small portions skip it through the meat grinder, and the resulting noodles evenly scatter on the baking tray. When we pass all the dough through the meat grinder, we remove the baking tray in the oven and bake the so-called cake. Bake it for about twenty minutes, until the golden color of the dough. After that, we take a baking tray from the oven and turn the warm "cake" with hands or tolkushka into a crumb. Let the resulting crumb completely cool. Then we take out the cream from the refrigerator and begin to spread it into the sand crumb: first half, then two or three more. Why not put all the cream right away? And what if, in your opinion, it turns out to be too much? Spreading the cream in parts, you can control the consistency of the future cake "Anthill". Put a smaller cream - the cake will get drier, there will be more cream - and the cake will be more juicy, but also more caloric. Now it remains to lay out the resulting mass on a flat, wide dish, to give it the shape of a real anthill and decorate it at your discretion. We leave the ready cake for half an hour in a warm place, so that the short dough is soaked with cream, and then for another hour we clean it in the refrigerator. That's the whole process of making an Anthill cake. And now - the promised nuances and secrets. 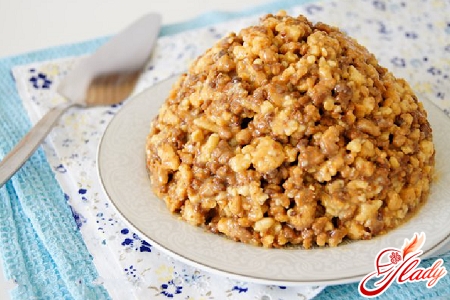 Now you know how to make an Anthill cake. The task, frankly speaking, is not the most difficult. Prepare this dessert can any housewife, even an inexperienced or just beginner to master the wisdom of home confectionery art. So this cake can be a good and successful start: simply, quickly, deliciously, effectively! Cook with pleasure. And a pleasant appetite for you! We advise you to read:

Cake from cookies and sour cream: a quick way to prepare a delicious dessert

Cottage cheese-yoghurt cake: create a holiday for yourself!

Cake of biscuits and condensed milk: an excellent dessert in a hurry