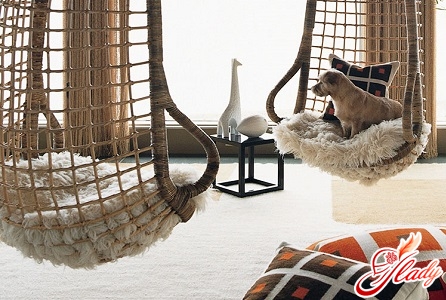 All those who have their own cottage or smallcottage area, know how important it is to create a cozy atmosphere not only in the house itself, but also around it. A great idea for a garden is a pendant chair that will not only decorate the area near your house, but it will also be a great place for you to relax - it is always nice to spend an evening in the air in a comfortable atmosphere. Let's talk about how to execute such a chair with your own hands. 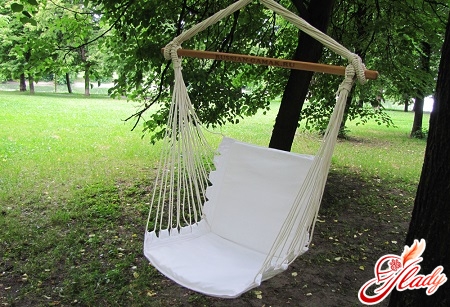 The first version of the hanging chair - with a cover. No difficulties here especially not, it will take only a little time and a small arsenal of funds. First of all, a steel hoop (∅90 cm) and a good strength fabric from one and a half to three meters long will be useful. In addition, buy a doublerine or non-woven fabric, as an alternative, you can take the trouser braid. It takes an eight-meter sling and an iron ring, due to which the chair will be attached to the ceiling. Metal buckles (4 pieces) and sewing accessories, centimeter and scissors are also useful. The first stage is sewing a cover. Carrying out its own cutting, be very careful, take your time - because of inattention, you have to redo everything. If you have not decided on the exact size, you can leave the allowances a little more - they can always be cut. So, take a piece of fabric and cut out of it two squares, equal in size: length and width of one and a half meters. Each part is added four times. Note the fourth part of the circle with a radius of 65 cm from the center corner. Mark the lines and begin to cut out circles that are the same in parameters. Now move away from the formed circles by four centimeters inside and draw a line. The second step is to mark the holes for the lines. We do this on the first lap. Fold the material four times and iron. Focus on folds. For the first two lines, the angle of inclination will be forty-five degrees with respect to the fold, and the other two have thirty. After noting the corners, unfold the circle and iron it again. Now there are axes, which will be pointers to the places of slots under the slings. On the formed axes, mark all the slits. These are rectangles, whose height is fifteen centimeters, and width - ten. Inside these rectangles, you need to make the markup in the form of a letter Y, it is on it and have to cut. Fold the circles together and make sure that the shares of the different parts do not match, then the cover will hold the desired shape better. The placed circle is placed on top. Now put them together and make cuts on the first and second circles. At the fourth stage, bend the "petals" of the holes formed to the underside. Cover the rectangle with a fleece or dublerin - this is necessary so that the fabric does not crumble. Then we make a full cut, which we spend off the edge, retreating a few millimeters. The fifth stage - after stepping slightly from the edge (four centimeters), you need to sew two circles together, leaving a hole to insert the hoop. The oversize is cut, giving it a jagged shape along the entire perimeter. Now you need to turn the cover out and iron it. Then you need to cut the strip of sintepon and trim them with a hoop. It is best to do this in two layers. The finished sheathed frame is inserted into the cover. Now we sew the circular parts, moving the rings to the edge. Sewing is necessary at a distance of seven centimeters from the edge. At the next stage, turn the inside out of the hole, which has not been sewn yet - it was left specially for the hoop insertion. Then we cut the allowances and chop them off from the front side; they should not deform the general geometry of the circle. Now sew the edges and stitch them on the sewing machine, retreating a few millimeters. Again, move the hoop to the finished edge and sweep away the cover at a distance of seven centimeters. We are already nearing completion. Cut the sipepton in the slots and push it inside the cover, fixing it all with threads. Use a hidden seam to sweep the slots along the edges. Then you need to strengthen the cover on the frame. This can be done by quilting it with your own hands on a ready-made design. After every five stitches, tighten the knot more tightly. Do the next row of stitches at a distance of six to seven centimeters from the previous one - a dense fabric must be freely assembled into soft folds. Now cut the line into four two-meter parts, and its ends are blown over the fire. Thread the end of the slings into the slot and fold, forming a loop. Sweep with needles, stitch. This operation must be repeated with each line. And in the end we put the loose ends of the lines into pre-prepared buckles, then into the ceiling ring and once again into the buckles. This will help to adjust the height of the chair. The ring will collect each of the lines into one common suspension. That's all - the chair is ready! This is the simplest version of the chair from those that you can do yourself, because there is only one hoop at the base. 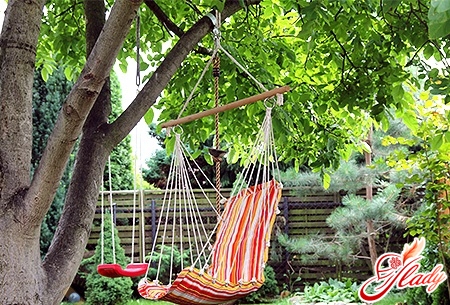 The second option is a hanging wicker chair, inthe basis of which is two hoops, which are braided with a cord in the technique of macrame. To make such an armchair with your own hands, you will need two hoops made of metal-plastic (a tube of 35 mm), one hoop for the backrest (110 cm), the second for a seat (70 cm). In addition, a polyamide cord with a thickness of four millimeters is useful. It is best to buy a cord with a special polypropylene core, which when knitted creates very tight knots. You will need both slings (twelve meters) and a pair of thick cords to fasten the rings. If we talk about the size of the hoops, then they can be less than the originally specified parameters, which are limiting. Cord is better to buy immediately in full, so that there is no discrepancy in its texture or color. Everything you need to make an armchair is there? Let's get to work! First of all, we need to weave the hoops. On the meter of the tube, an average of forty meters of cord goes. Lay coils very tightly, evenly, pulling well. Through the next twenty turns, fix the winding, tightening the hinges tightly, until it stops. Please note that the surface of the braid should always be even and strong, because it is attached to it and the net for the seat of the chair and back. For work it is better to buy a pair of gloves. Now start on the hoop weave a net, attaching it with a double loop directly to the braid. In this case, we use the "chess" pattern, which differs by flat knots. Do not cut the ends of the corners, because then they will need to make fringe. How elastic the grid turns out depends on how tight the cord was pulled during operation. Even if the ring is deformed during dense weaving, then it can be compensated with the same tension of the knots, accordingly, the shape of the hoop will be restored. Next comes the fastening of the finished rings from the hoops to the chair. On the one hand, it is necessary to connect the hoops due to the strong winding with a special cord. And from the other end, you need to insert two wooden bars of the same size. At the ends of the bars we make the cuts, which will allow the hoops not to slip. This is what will ensure the desired inclination of the back. The length of the bar should be set, paying attention to the height of the back. Now about the schemes. If you decide to make a chair for a dacha with your own hands, then you will have to learn the weaving. Great, if you are doing macrame, it will not be difficult for you. Choose any patterns - on the armchair anyone will look great! Attach the cord from above to the backrest, and fasten the net to the seat. Tighten the cords better from below on the ring. The overall design is reinforced with dense cords, through which the back and seat are connected. The slings are attached to the same chair, and after that it can be placed in the garden. The above two methods will allow you to easily make your own hands a hanging armchair of the original form, spending a little time and money. Now you can spend time at any time for a cup of tea or a book in the open air, and your guests will be pleasantly surprised by such a non-standard interior in your garden.

Curtains of beads on their own: how to make a curtain

Flowers from plastic bottles with their own hands