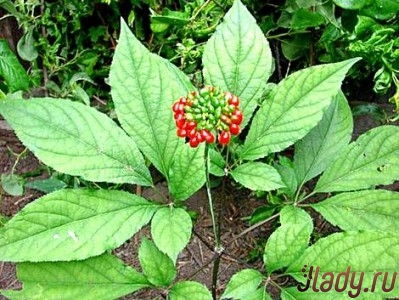 It is worth noting that the first of Europeans,who announced the power of ginseng, became Nikolai Spafary, a native of Moldavia, head of the embassy of Tsar Alexei Mikhailovich in China: "... and that root is brewed and given to those who are weak from a long illness and gives great help." However, previously the ginseng sporadically visited Europe: in the 9th century the Arabs already supplied it from Asia, a little later the authoritative Avicenna mentioned the properties of the root in the "Canon of Medical Science", and at the end of the thirteenth century the Venetian Marco Polo brought the "gift of immortality" . However, the Manchu root was destined to be sold to Dutch merchants who distributed it under the Latin name "ginseng" or "panax".

There are rumors that ginseng is born from lightning. If it hits the pure mirror water of a mountain source, the source will go underground, and in its place will take down the roots hiding the power of the heavenly fire panzuj. During flowering on one of the nights, ginseng gives a special radiance, and the one who extracted it can resurrect even the dead.

The last dynasty of emperors Qing led towhite heat not only the country, but also the population of ginseng. For centuries, the soldiers of the empire wandered along and across the forest, tracking down poachers. Subsequently, the state began to issue licenses for collection; annually an average of one and a half thousand. Kornevschiki gathered in groups of 12 to 15 people and under a vigilant supervision from above they extracted the root.

Now there are only three isolated regions,in which the "root of life" resides: the southern Sikhote-Alin, Nadezhdinsky and Khasansky districts of Primorsky Krai and the Chinese provinces of Jilin and Heilundzyan. For wild ginseng, cedar - deciduous forests are preferred, spruce and black fir forests sporadically, as well as oak forests with an admixture of lime and aspen. Closer to the border with China, the plant can often be found next to the yellow birch and hornbeam stone pine forests. Experienced kornevschik is aware that the healing root likes heat and is very sensitive to cold. Long-term (up to 200 - 400 years!) Are characterized by shaded places (but illuminated by the sun in the first half of the day) with high humidity.

The root of ginseng makes a person lesssusceptible to diseases, increases metabolism and, accordingly, restores strength and performance. It also improves appetite, makes the heart rhythm more rare, regulates blood pressure, promotes early healing of wounds. Chinese pharmacists always prescribe drugs from the root of the elderly: they do not recommend it to children, with hypertension and summer heat. In Korea, both root and leaves are used.

High cost and even higher demand exacerbated its already illegal collection and smuggling. Through the world market of ginseng - Hong Kong - annually passes over three thousand tons of root.

Usually, ginseng is excavated in the evening,sunset so that the root is as short as possible in the light and dry. It is carefully extracted from the soil with a special spatula, in order to preserve it in its original form. According to the unwritten laws of the ethic of the rootkeeper, all the mature fruits should be collected and planted back into the soil. In search of ginseng go without weapons, armed with only a stick called a panzikeka. The stick is a faithful companion to the rootkeeper: it should be light and strong, preferably from maple, reaching a length of one and a half meters. The hunter invariably relies on it when climbing and descending, crossing the river; By it he spreads the grass, looking for the desired leaves. Often an unarmed hunter himself became a victim: before Mao Tse-tung came to power, not so many desperate kornevschikov wandered in the forests, but miniature armies of horsewoman - hunhuz, taiga robbers. However, even today, the ginseng root is an extreme and unforgettable journey. understand in terms of Ginseng hunting is called a root, ginseng collectors call themselves kornevschikami. Even in ancient times, Chinese collectors created a special ginseng language, called "hao - shu - hoa". Initially, the language is too laconic, but eloquent: the rooters put conventional signs on the trees and marks on the bushes. According to custom, the "red" kornovka lasts from August to the middle of September, when ginseng grapes are actively ripening. Nevertheless, the overwhelming majority of fishers do not shrink the roots "on shoots" (May - June), "on the leaf (in the shape of the stem) and" in the yellow ", when the leaves get a yellowish tint in the autumn. root code A true ginseng hunter must follow three rules: do not take small roots, take roots before ripening seeds and do not take roots previously found by others and marked with signs. Usually there is an ordinary root with a mass of 15-20 g, although some manage to find half-century roots (40-50 g). Like the king of plants, ginseng often acquires a personal name akin to the "Emperor" or the "Great Hermit": this happened in 1908, when a root weighing 600 was found during the laying of the Manchurian Railway.

Who seeks will always find

Usually on the cedar nearest to the place where there wasGinseng is found, from the side facing this place, the cortex is removed. The classical sublubes make a width of about 20 and a length of up to 80 cm, and thus it persists for dozens of years and is seen from afar. This sign signifies that if once a root or whole family was dug here, the crumbling seeds, small or large "sleeping" roots could remain.

Kornevschik in this way, as it were, shares a secretwith their colleagues in the shop. The finder has the right also to put a mark by sticking a wand, saying, "I found, but left to grow up." However, many people now disdain the law and tear out the roots, not observing any of the rules. Therefore, increasingly resorting to the wreckage: the wise-growing kornevschik all the time breaking on the move branches of the bush. The fragments are preserved less than the sub-bases, but they are much more difficult to notice.

You should not shout and whistle, as a rule, they beatstick on a smooth and smooth coniferous tree, from below upwards, along the trunk so that most of the stick lies on it. The sound "so-so-so-so" on the slope gives away another "tuk-tuk-tuk": it may seem that the woodpecker, and at this time you and your friends converge.

Around the neck (rhizome) a circulartrench. Then release the neck with the head from the ground and determine the size of the root. After from any edge of the trench bone rods dig out the root processes, fingers touch all the hairs under a layer of loosened soil and, making shaking movements, slowly release them in a circle. Having freed from the ground the whole "beard" of the root, in the same way the main processes and the body of the root are dug out. The dug roots immediately fit into an envelope of cedar bark. The bottom of the envelope is covered with a layer of moistened moss (2 - 3 cm thick); followed by a layer of sifted through a sieve taken immediately land. Stretchedly folded roots are covered with the same layer of moss and earth. The edges of the envelope are bent and the new box is tied with string. Being packed in this way, the roots do not deteriorate within 10 to 12 days: try to proceed as quickly as possible to the last and most crucial moment - the realization of the treasure. We have already talked about an unusual hunting for truffles. The authentic fishing of the inhabitants of Manchuria, which brings both fabulous profits, so sorrows and deprivations, is not inferior to them and the interest in hunting for the "root of life". Author:

How to return her husband?

Features of a choice of an autoarmchair for children

How does the microwave oven work?