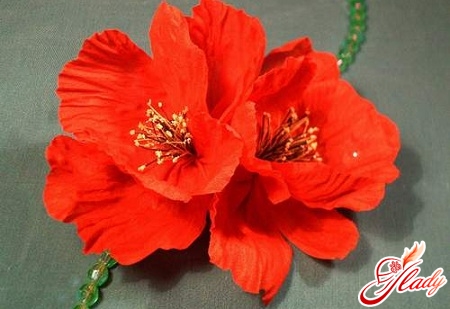 People who are indifferent to flowers, probably not. And if they do, they are, by and large, unfortunate people. But women do not belong to this category, because it is women, like no other, who know how to appreciate and understand the beauty of flowers. And, of course, children are delighted with any flowers: whether they are living flowers made by themselves or drawn. Perhaps that's why women like to decorate their clothes and hair with flowers, and children love to make all kinds of crafts in the form of flowers. But it's not just children who like making flowers with their own hands. If the children are satisfied with the opportunity to make crafts from paper or plasticine, the adult masters experiment with a wide variety of materials. In the course goes everything, from noble silk or leather and ending with literally garbage - plastic bottles. And these crafts can turn into chic brooches, decorate bags or hairstyles, become an element of a panel or a decorative bouquet on the windowsill. And children's crafts will bring a lot of pleasure not only to the children themselves, but also to those to whom such flowers are intended as gifts. Let's take a look at the handicrafts available for children in the form of flowers, as well as more sophisticated but also fully mastered techniques that will allow the flowers to be made by adult masters.

Children with pleasure are engaged in needlework. Flowers with their own hands on the Eighth March or the birthday of your beloved mother or grandmother - crafts that will successfully replace the bouquet of fresh flowers. And made by children, they will also carry a special energy of love. For snowdrops we will need:

By the way, more advanced masters can dosuch flowers with the help of a salted dough. So. From plasticine we make a base for a bouquet: roll the ball and turn it into an islet-islet. Cut three (four, five) pieces of wire for the stems. Stems wrapped paper or coated with clay, and the upper ends of each stem bend the arc. Now, on the bent end of the stem, we attach a small ball of plasticine, which is also formed in the form of a dome with an enlarged base. At the bottom (bottom), make a small groove in which we insert three pumpkin seeds, stuck them in plasticine with sharp ends. Stems with flowers are fixed in an island of plasticine. From corrugated paper we cut out leaves (by the number of stems). The leaves are lanceolate, elongated, and the edges are carefully stretched, forming a light wave. We attach the leaves to the stems or simply stick them into the plasticine base. To make "grass", strip the corrugated paper cut from one long side fringe and curl it. Grass wrapped green island with snowdrops. Our spring primroses are ready! 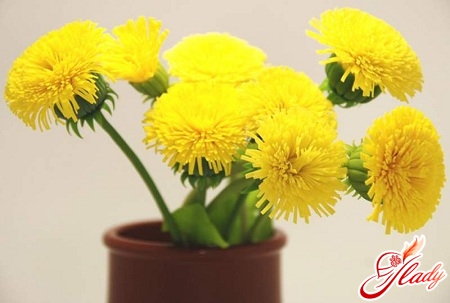 Flowers with their own hands can be made from leftoversyarn. By the way, children really like to make crafts, for which yarn or thread is used. Make dandelions can be made of yellow, lemon or white yarn, but threads of a different color will look no less spectacular in these flower pompoms. Yes, we will make them from pompoms. To make such flowers, you need to prepare the following materials and tools:

First we make patterns for pompoms. From the cardboard we cut out two circles of the same diameter. In the center of each circle, cut out a circular hole to make a ring. Rings are cut, making one cut from the outer circle to the inner circle. The size of the pompon determines the width of the ring, which will be equal to its radius. We fold the rings with a pile, take the thread and start winding the rings around it, passing the thread through the cut, which is left free of the thread, and the carved center. After wrapping the ring tight enough, take the scissors and push them between the rings. Now the most difficult. Carefully cut the winding, while holding the fingers of the thread in the middle of the ring. Further, without disconnecting cardboard rings, we thrust a thread between them and carefully pull together both halves of the winding from the yarn. We tie a string with a knot and remove the rings. Now it remains to make the last step - to fluff the pompom and cut the protruding threads. The final stage of manufacturing dandelions is gluing pompoms to twigs.

Crafts in the form of tender bouquets or exquisiteflower compositions can be varied. With your own hands, you can make flowers for the topiary or, as it is called, the tree of happiness. And if you do not want to make a tree, you can make a flower balloon. It's incredibly beautiful! And such crafts not only develop a sense of beauty, but also decorate the interior of your home or become a nice addition to a strict office environment. For such crafts you will need:

To begin with, you need to make a thread ball,which will become a skeleton. We inflate the balloon to the desired size and cover it with a hand cream (so that the yarn does not stick to the surface of the ball). We put the ball of thread into the bucket with the glue. Now, pulling the tip of the tangle, we begin to wind the air ball moistened with the adhesive in the adhesive. When the spider's thread becomes thick enough to hold the shape, we hang the balloon to dry. After the threads are completely dry and harden, burst the balloon and carefully take it out of the thread-like frame. Let's start making flowers. To do this, cut from corrugated paper stripes length of twenty and a width of two centimeters. At the same time, make sure that the "grain" of the corrugated paper is located vertically (perpendicular to the long side). Now, in each strip, slightly stretch one long side, making it wavy. Next, we collect the strip in the accordion and twist another (not stretched) edge. We fix this edge with threads or wire, we let out the flower and attach it to the thread of the ball. Such roses from corrugated paper densely cover the entire surface of the frame. To make the flower ball look neater, we place the flowers in a staggered order. We put the finished ball in an empty flower pot and put it on the windowsill. Or we attach to the ball a beautiful ribbon or braid and hang it to the ceiling or to the window. 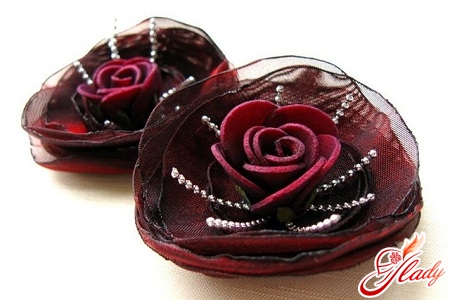 There are many techniques with which you canmake artificial flowers. And if the children's crafts of adults seem too simple and even primitive, then try, for example, such technique as tsumami Kanzashi. It's almost origami, only silk. Small squares of silk fabric are folded in a special way and collect flowers from them with sharp or round petals. Equally interesting is the technique called quilling. Twisted strips of white or colored paper turn into unusually beautiful openwork flowers. By the way, in this technique, not only flowers are made, but, for example, Christmas snowflakes or even entire plot panels. Flowers from the fabric can be made in the simplest way, cutting out the blanks of petals from the organza or silk and singing them over the flame. And you can get a special tool (bulbs) and make traditional floral bouquets of starched fabrics. Chic, almost indistinguishable from living flowers molded from cold porcelain, which is prepared in a special way, and the flowers are painted by hand. And more flowers are knit, made from plastic bottles, weave from beads, they roll out of wool, they are made of felt and leather. In short, practically any handicraft technique can be adapted for these purposes. So if you are friends with any needlework or just decided to make flowers yourself, then be sure to translate your ideas into reality. The main thing is to start. Dare, you will definitely succeed! We advise you to read:

How to sew a cosmetic bag with your own hands?

How to sew a skirt from tulle?

Hearts with his own hands made of paper

Christmas fortune-telling: how to know your destiny