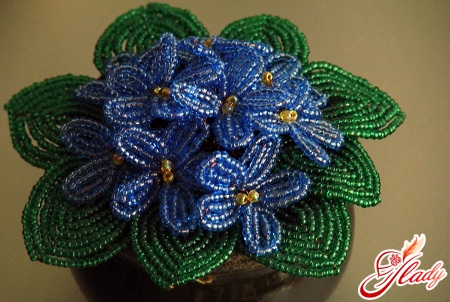 What is the beads, is known, perhaps, to all. However, not all have a full idea of ​​how diverse its application is. From the beads weave bracelets, make necklaces and beads, clips and rings. Beaded embroider paintings, decorate clothes, wallets and bags. And the beads make amazing flowers! Of course, the real masterpieces of beadwork are subject only to experienced craftsmen, however, almost everyone can set flowers from beads with their own hands. Naturally, you need to start with a simple, and only then move on to mastering complex techniques. But you need to start! Shall we try?

Very simple in making a flower from beads. Not only beginner craftsmen, but even children will cope with it. So, for a simple bubbly flower we need the following materials.

However, the last material can easily be replacedordinary plasticine. The wire is better to take copper. It is flexible and durable, besides it is quite suitable for stringing beads. Cork bottles can also be replaced by any suitable containers. 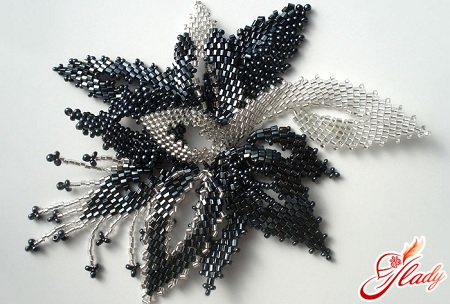 So, for the first petal we needcut off a piece of wire about thirty centimeters long. Now thread on it (closer to the left end of the wire) thirteen or fifteen beads of chopped beads and twist the wire, forming a loop from the felling. For this we make two or three turns, connecting the wire under the extreme beads. To the right of the petal we string the same number of beads and make another loop. And make the same loop to the left of the first. We make the edge of the petal. String eight or ten beads (round - more) to the right end of the wire, move them to the extreme loop and let the wire pass under the middle of the top of this loop. String another two or three beads, we close the gap between the right and middle loop and let the wire pass under the middle of the top of the middle loop. Another two or three beads - and wire under the top of the left loop. Now we close the edge by wearing eight or ten beads, dropping the wire to the base of the twisting of the petal and fixing it with several turns. Twist the ends of the wire at the base of the petal. We thus make seven or eight petals. Now comes the middle of the flower - the stamens and the pistil. To make them, put on a new piece of wire one big yellow bead, fold the wire in half and twist it. This is the flower pestle. Next, for a length slightly longer than the previous one, we put on a small yellow bead, fold the wire in half and twist it, forming a foot of a stamen about a centimeter high. We retreat to the right or to the left a couple of centimeters and in the same way we make one more stamen. Thus, along the entire length of the wire we make eight stamens. Next, take the wire-pestle, put it on the middle of the wire with stamens and wrap around the pestle, first the left edge of the wire along with the stamens, then the right. Loose ends of the wire twist the turns along the entire length.

We will perform the leaves in the technique of the Frenchweaving. To do this, on a piece of wire we make a knot, retreating from one edge three centimeters. Now put on the long edge of five long beads, move them to the nodule, grab about four centimeters of the free wire and make a loop, folded in half and twisting the wire. Our beads will be between the loop and the knot - this is the middle of the leaf. Next, put ten round beads on the free end of the wire and make two turns of wire above the knot - this is one edge of the leaf. We put eleven round beads on the free end of the wire and screw it to the base of the loop - this is the second edge of the leaf. Do not forget to make the edges straighten the wire before screwing, so that the sheet does not turn out to be curved. To frame the edges of the leaf, we continue to work with the free end of the wire. We put on it nine long beads and fasten it over one edge of round beads. Similarly, we make the second arc of eleven long beads, fixing the wire between the arcs. The leaf is ready. Similarly, we produce five more leaves. We collect twigs. For her, in addition to harvested leaves need a green thread. So, we take a leaf in one hand, and in another thread. We fix the thread at the base of the leaf and wrap it around the cord-foot, applying turns from top to bottom. After wrapping the foot for a length of two centimeters, attach a second sheet to it, fasten it and also wrap it with a thread. Next, we impose turns, connecting the legs of two leaves into one. After applying coils of thread for a length of about a centimeter, we fasten the third leaf, connect its leg to the common one and twist it with a string. The branch is ready. In the same way we make the second twig. 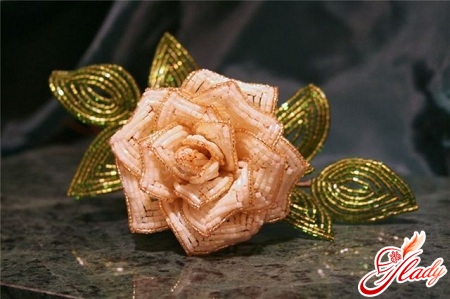 When all the pieces of the flower are ready, it's leftcollect and fasten in a pot. To do this, we take one petal, apply it to the stamens and screw. Wire stamens should be the basis of the flower, so all the details must be screwed to it. Then screw the second petal opposite the first. Then we screw the second pair of petals, placing all four petals crosswise. And the other four petals alternately screwed between them - in between the petals. Again, take the green thread and begin to twist the stem of the flower. After wrapping it with a thread for a length of five centimeters, we fasten the first branch with leaves, connect the stem of the twig with the stem and continue to twist it. After another centimeter of the stem height, we screw the second branch, connect both wires and wrap the stem to the end, leaving the small end of the stem bare. Next, we fix the flower in the pot. To do this, put a little bit of alabaster in the lid and dilute it with water until the density of sour cream. Mix the alabaster and insert the flower plugs into the center. The mixture will freeze for ten minutes. In order not to wait, holding all this time with the flower of the hand, it must be propped up, substituting a spool, for example, with a thread. If you do not want to mess with alabaster, then just fill the stopper with plasticine and insert a flower into it. When the flower is firmly fixed in the cork, you can decorate the pot, fill the "ground" with any glue and cover with decorative sand or small beads. The edges of the plugs are wrapped in any suitable ribbon or ribbon. Straighten the flower petals and leaves on the branches, straighten or bend the stem and admire your creation. A flower can be made from a multi-colored bead, and then you will get a real seven-flower flower. If you make it from white and yellow beads, then it will be chamomile, if from red - poppy. In a word, fantasize! Such a nice trifle and desktop in the office will revive, and on the bookshelf of the house will take a worthy place. Try to start small, and then any complicated technique will surely get you! Good luck! We advise you to read:

New Year costume with your own hands for the boy: give vent to fantasy

Flowers by own hands

New Year costumes for girls with their own hands

Crafts from cockleshells own hands