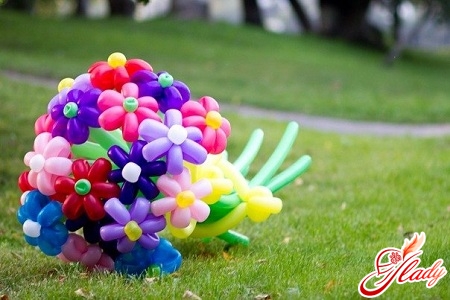 Balloons! It's always a good mood and always a holiday! To the fact that you can decorate the interior to your home (and not just home) celebration with balloons, we are already used to it. But, by the way, flowers from balloons can be an excellent alternative to a bouquet of fresh flowers. Of course, if we are not talking about a romantic date or offer of the hand and heart (though, this is how to look). But in any case, such a gift will always be original, and materially very beneficial. In addition, make your own flowers from balloons is actually quite simple. By the way, the art of decorating with balloons is called aerodisign, and the technique of making such decorations is called modeling. Let's find out how to make flowers from balloons to make a bouquet of them or use them as decorations for a festive interior.

In order to make a whole bunch ofcolorful balloons, it is enough to understand the principle of making such flowers and first try to make at least one flower. Shall we proceed? To make one flower, take four bright round or oval balls of the same color, for example, lilac or red and one round ball of another color (white, yellow, blue). In addition, we will need a long ball-sausage for modeling and, preferably, a special pump for inflating balloons. Of course, it is possible to inflate round balls with your mouth, but to do this with a long ball is quite difficult. So, first, we inflate four colored balls - these are the petals of our flower. Now we connect them in pairs and twist (bind) the two pairs together. The petals are ready. For the middle of the flower we blow the fifth round ball. We inflate it so that the size of this ball is two times or three times less than the previous balls, put in the middle of the petals and fix it from the bottom. It remains to make a stem. To do this, we will inflate (not very tightly) the green ball-sausage and fix it with one end from the bottom of a bundle of round balls. In exactly the same way, we make the rest of the flowers, using colorful round balls and green balls for modeling. We collect the balls in a bouquet and tie it in the middle of a bundle of stems. By the way, if such a bouquet, consisting of at least three flowers, is put on the floor, slightly spreading the "stems" for support, it will take a strong vertical position and serve as an ornament of the interior. 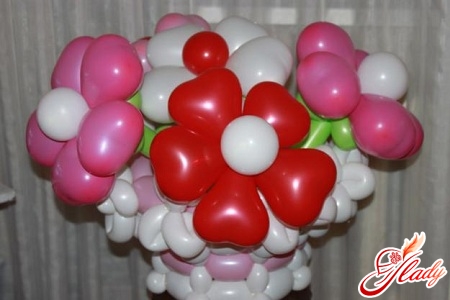 Flower from balls for modeling

More sophisticated techniques for making flowers fromballs with their own hands, but also quite affordable for any skilled worker. For this we need only two balls for modeling and a pump. From one ball we make a flower, the other will be a stem, so choose a green ball and a ball of any other color. First, we make a flower, for which we do not tighten one ball too tightly, leaving the tip-pipette with a length of three centimeters. Now the lower end of the ball is tied with a strong knot and we connect the both ends of the sausage with each other. Then add the sausage in half (along!) And twist twice in the middle. Then we press both parts of the ring together, visually divide it into three parts and again twist it twice to make three pairs of "sausages". Now add them to the accordion and proceed to the most virtuosic part of the flower making. We take the accordion with the left hand and clamp it into the ring from the index and thumb, wrapping it in the places of the twisting of the ball so that the "sausages" curl upwards and downwards from the ring of fingers. The top three "petals" are clasped with the right hand and twist again. Expand fingers and see that from the accordion turned a flower. For the stem, we inflate (also not quite tightly) the green ball and tie its tip. Stepping back from this tip, ten to twelve centimeters, twisting the sausage. Now the short part is bent in half and screw the tail of the ball to the point of the first inflection (the first knot). Then we put the stem into the flower, letting it through the middle and leaving the folded short part of the stem outside the flower. Stepping back from the base of the flower of centimeters forty, bend the stem first upwards, and then down again. Then in the middle of the resulting triple part of the stem, make another twist and get a stem with leaves. Now the whole flower is ready. 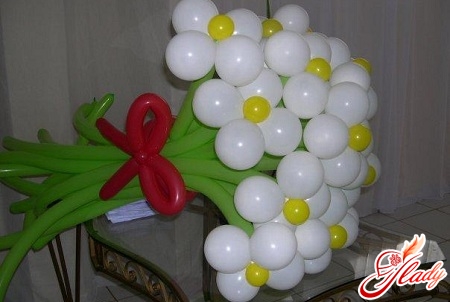 Camomile on the ceiling

This flower from balloons, in general, and notflower, and the ceiling garland. Nevertheless, such an ornament, made by own hands, looks like a flower from balloons. For him, we need four red latex balls, four white and one gold. Make this daisy is simple.

This chamomile, placed on the ceilings or on the walls, will be an excellent decoration of the festive interior! Try it. You will certainly succeed! We advise you to read:

Earring with your own hands: how to do?

Earrings with your own hands of beads: tools and materials

Accessories with their own hands - stylish and fashionable