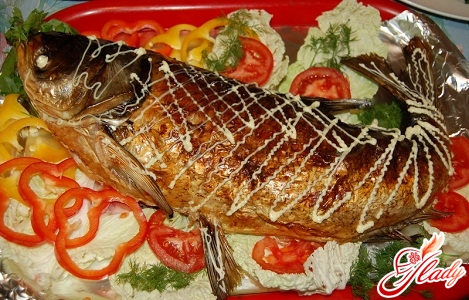 Every hostess certainly wants to please hisfamily delicious dinner, and, to prepare something special. Stuffed fish - the recipe is very tasty, and it's not difficult to cook it. So, for those who do not know how to cook stuffed fish, we have prepared several recipes:

Cooking method: Preparation of stuffed fish in Hebrew, begins with the fact that the fish must first be peeled, rinsed and cut into large pieces, with a longitudinal cut do not need. Then remove from each piece of the inside and with a sharp knife carefully cut the flesh in the spine of the fish. The resulting fish fillet to pass through a meat grinder. Onion to clean, bread to soak in milk and all together as well as fish, to pass through a meat grinder. All the ingredients are thoroughly mixed together, and then add the raw egg, pepper, salt. Pre-prepared pieces of fish to combine with the prepared forcemeat, and then level the edges. Beets, onions and carrots cut into layers and put on the bottom of the pan. On top of the vegetables put the stuffed pieces of fish, and then pour it with so much water that she would cover all the pieces and put on fire. The remaining scales from the fish put in a rag bag, rinsed, tied and put in a pan with pieces of fish. Add pepper and salt to the water. The pan should be left on fire for 15-20 minutes, so that the broth is boiled, and then the pieces of fish are put on the dish and decorated at will. Scale from the bag to throw out. Ornaments can be made from circles of carrots, as well as other vegetables. Stuffed fish are ready in Hebrew. Bon Appetit!

Cooking method: How to cook stuffed fish with rice? Fish clean, rinse, gut, and then put in a marinade. To make it, you need to crush coriander and garlic, add spices, water, lemon juice and water. Mix thoroughly. Leave the fish in the marinade for 3-4 hours. Rice boil in salted water. Tomatoes to pass with boiling water, peel them off, cut into slices and remove seeds. The resulting tomato juice to merge into a glass. Olives shall be finely chopped and added to them a peel of salted lemon and tomatoes. The finished mixture is divided into two parts, and to one of the parts add rice. The resulting stuffing stuff the fish, and add the butter to the abdomen. Cut out the incision and lay the fish on a baking tray. Top with sprinkle the remaining green olives and tomatoes, top to lay out 50 gr. of butter, add 250 ml. water and tomato juice. Put the baking tray in the oven for 15 minutes. Bake fish at a temperature of 180 degrees. It should be noted that from time to time the fish should be watered with juice formed on the baking sheet. Fish stuffed with rice is ready. Bon Appetit!

Cooking method: How to cook stuffed fish? To do this, the fish must be scraped off, cut off the head and without cutting the abdomen gently remove the entrails. Then remove the gills from the head. Head and carcass rinse under running water, and then cut into pieces. From each piece of fish, use a sharp knife to remove the flesh without damaging the skin. Fish fillet, bread pulp (previously soaked in water), peeled onions, carrots and half beets, pass through a meat grinder. Then add the sugar, egg, vegetable oil, add salt and mix thoroughly. The resulting mixture to fill the pieces of fish in the place where the flesh was removed, and then use a knife to level them. In the pot, put the carrots and beets cut into circles, and then thoroughly washed the husks from the onions. On top put the stuffed fish pieces, and then another layer of vegetables. Pour water into the pot. Water should cover the top layer of vegetables. Pour the pan on the fire for 2 hours. If necessary, add salt to taste. Fish stuffed with vegetables is ready. Bon Appetit!

Cooking method: Wash the fish fillets, dry with a paper towel, then cut into portions and grease with a mixture of pepper and salt. 70 gr. Melt butter in a frying pan and fry on it washed and finely chopped mushrooms and chopped onions. Tomatoes should be filled with boiling water, peeled off from them and finely chopped, and then put in a frying pan to mushrooms and onions. Then send the finely chopped dill, pepper and salt to taste. Put out for 15 minutes. Finished the cooled down mass spread each piece of fish fillet and roll into a tube. Fix the tubes with a thread or toothpicks. Eggs beat up. Put the remaining butter in the frying pan. Each piece of fish dipped in an egg, followed by breadcrumbs and put into a frying pan. Fry fish rolls on both sides until cooked. Before you remove the frying pan from the fire, pour the rolls with sour cream and leave to cook for another 5 minutes. Stuffed fish mushrooms are ready. Bon Appetit!

Cooking method: Peel onion, finely chopped and put in a deep frying pan, in which pre-pour the vegetable oil (more) and put the soda. Put the frying pan on the fire and put the onion to a golden color. Fish to clean, rinse, dry and make with the help of a sharp knife cuts from both sides of the spine of the fish. After that carefully remove the flesh of fish from the carcass. The result should be a whole skin without gaps. Cut the fish fillets through a meat grinder, and then combine the resulting minced meat with the fried onions. Mix thoroughly, pepper and salt. In the resulting mass to drive eggs, a little breadcrumbs and again mix thoroughly. Then with the ready mass stuff the fish skin, and put it on the baking tray. Put the baking tray in the oven for 15 minutes. Bake at 200 degrees. The fish is stuffed in Odessa ready. Bon Appetit!

Cooking method: To begin with, the fish must be cleaned, stripped and rinsed, and then dried using a paper towel. Fish pepper and salt, and then grease with lemon juice and leave for 1 hour. In the meantime, boil buckwheat and eggs. Then the eggs must be finely chopped. Onions finely chop and fry in a pan with the addition of vegetable oil. Buckwheat, eggs and onions to mix, and then fill the resulting mixture with the abdomen of the fish and sew. Stuffed fish put on a baking sheet and put in the oven for half an hour. Bake at a temperature of 180 degrees. The fish stuffed with buckwheat is ready. Before serving, decorate the fish with dill. Bon Appetit! We advise you to read:

How to cook meatballs in a multivariate easily and simply?

How to cook meatballs with gravy: recipe

Potato casserole with mushrooms and cheese