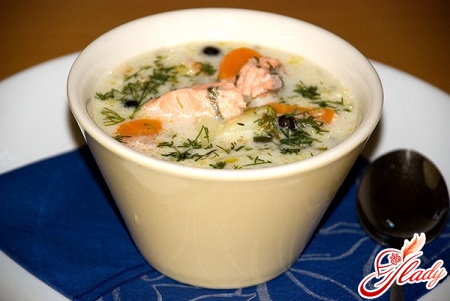 World-famous writer Walter Scotttold that in times of abundance in European rivers salmon, Scottish fishermen in hiring for work put forward an ultimatum - to feed them as little as possible this fish. However, today, salmon soup is a delicacy, even if the hostess does not put steak in it, but cooks broth only from the head, ridge and fins.

Of course, fishy soup can be cookedfrom any red fish, whether it is trout, salmon or pink salmon, but it is the salmon that is recognized as the queen of all salmonids. It is distinguished by purity of silver-blue color, without spotting, and bright scales. The weight of the salmon can reach 30-40 kg. Some individuals grow to 1.5 m in length. Inhabits salmon not only in the Atlantic and Arctic oceans, because there is also a lake variety. In our country, lacustrine salmon has chosen Onega and Ladoga lakes, and once it was "flooded" and many rivers. The sharp decline in the number of noble fish scientists associated with the deterioration of the ecological situation. Some fish farms are engaged in purposefully breeding salmon in their own farms, but this fish is noticeably inferior in quality to commercial fish. Therefore, when buying salmon for your dinner table, you should ask whether it is grown artificially. Especially cautiously it is necessary to be people who are predisposed to various kinds of allergies, because on farms in the feed can include antibiotics, pigmented and modified additives. An inexperienced customer can find it difficult to distinguish a wild animal from that grown in captivity, but if you set a goal, you can learn this. The wild usually has more developed fins, and the shape of the head is different. You can buy fish today in any trading network, as already divided on the fillet, and entirely in fresh or frozen form. There is also a budget option - a soup set consisting of a head, a ridge and fins. From it the broth turns out fat enough. 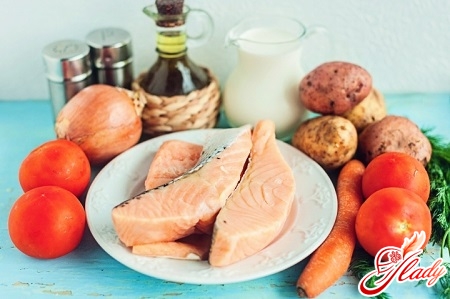 Nutritional value of salmon and its special features

A guideline only for the presentation of the dish and itstaste is not quite true. It is important that the food is also useful. In this case, the salmon has high taste characteristics, and a unique value for health. After all, it contains almost the entire complex of vitamins and 22 microelements needed by man. Especially valuable polyunsaturated acid Omega-3, which has a beneficial effect on mental activity and prevents aging of the body. A large amount of melatonin can provide a deep, healthy sleep. It should be taken into account that all this applies only to salmon that lives in natural conditions. It is vitally important to consume salmon regularly to all who suffer from cardiovascular diseases, nervous disorders and metabolic disorders. Salted salmon prevents the development of thrombophlebitis. It is also important that this fish is not capable of accumulating chemical elements in itself and harming the body. Salmon has a pleasant taste in any form, whether fried in oil or on a grill, steam, smoked, salted or soup from salmon. As for its preparation, the salmon is rightly recognized as a fish, which, with all the desire, can not be spoiled during cooking. Therefore, you can use any recipe. And yet there are some subtleties of culinary craftsmanship regarding this particular type of fish. Like any other fish, the salmon does not require a long heat treatment. If the carcass is small and it is supposed to be cooked entirely, then you need to put it in cold water, bring to a boil and, reducing the fire, cook until ready. Typically, a kilogram fish is enough for 20 minutes, and the fish, cut into pieces, is put in already salted boiling water and cooked for as long, 20-25 minutes. You can buy, as already mentioned above, a soup set that will not disappoint the landlady, since there is enough meat in the head of the salmon. Yes, and the price of a set of unique fish is much cheaper than the same chicken. And you can buy a whole fish to let it go on salting, and head, belly with fins, tail - in the ear. Only, in order to avoid bitter taste, it is better to remove the gills. If small portions of small portions or fish soup are brewed only from ridges and abdomen, then all the other ingredients of soup (onions, carrots, potatoes, croup) are first placed in the pan, and in the end are already fish ingredients. When fish soup from salmon is prepared from fleshy parts, the fish is placed in cold water, cooked until ready, taken out and only then soup is cooked on this broth. How much time should be cooked salmon head, the question is controversial, and it is unlikely that there will be a recipe indicating the specific time of cooking the head, since it depends on its size. Sometimes 20 minutes is enough, and even half an hour is not enough. In some recommendations, the hostess argues that it takes an hour to get a rich soup. But the increase in the cooking time, the fish will not add fat, but the valuable nutritional qualities will decrease. Some people prefer to pre-fish fish broth for more transparency before laying vegetables in it. But it does not matter. 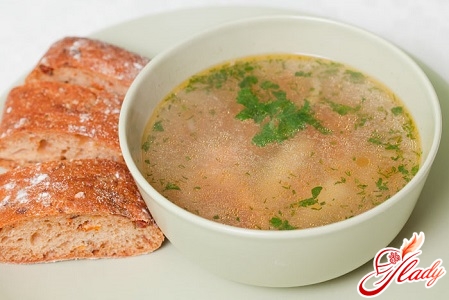 The classic recipe for fish soup

The easiest to prepare fish soup is notneeds a lot of ingredients, which, according to experienced culinary experts, only interrupt the taste and aroma of natural fish. Especially since the red color, like the borscht, which gives tomatoes, is not peculiar to the ear. A light recipe for salmon fish soup contains only salmon, onions, potatoes and greens. Even carrots are not necessary. To cook the broth, 300-400 g of salmon is required. Such a weight can give one head of an average individual. It is placed in cold water, brought to a boil. The resulting foam should be carefully removed. If the beginning of the formation of foam does not pass and do not allow the broth to boil violently, then there is no need for straining. Then add salt, peppercorns, a couple of bay leaves and a whole bulb. It is not forbidden to cut the onion into cubes. When the fish is almost ready, potatoes are sent to the pot. The cutting is arbitrary. Someone likes it more in the form of cubes, and someone is satisfied with large halves. It is unlikely that this will significantly affect the taste of the dish. Although in the salad the shape of the cutting is of great importance. Ready fish soup abundantly sprinkled with herbs: onions, dill, parsley, celery, coriander. To whom that to taste. And if to add to this soup sorrel or spinach, it will not differ much from the classic green soup with sorrel. The classic recipe for ears since ancient times had in its composition millet. At 2-2.5 liters of broth, half the glass will be enough.

If someone thinks that salmon soup is stillnot so beautiful, as you would like, then, of course, you can make a roast of onions, carrots, bell peppers, tomatoes. This recipe assumes cooking salmon broth and straining. After that fried vegetables are put in broth, potatoes are added to them. It is recommended not to boil the fish a bit, and then lower it again into the broth, already with all the ingredients for about 10 minutes. Sprinkle with the herbs ready for the soup. The recipe for soup-mash becomes more and more popular, and soup from salmon is no exception. It can also be a cream soup or cream soup. I must say that for the soup-puree the head is not the best option, it will need fillets. So, the salmon fillet should be boiled until ready with the addition of salt, onion and spices. Then the fish is taken out, and potatoes and carrots are boiled in the prepared broth. Separately in a frying pan you need to fry the onion and tomatoes without the skin. All the ingredients are combined in one container and whipped with a blender. In the prepared puree cream is added, which is not forbidden to substitute with milk, then the dish will be less caloric. After adding the cream, you must douse the dish for another 5 minutes on low heat. Since the salmon is a fairly fatty fish, it fits well with the components of the saltwort. The salted salmon recipe from salmon contains, in addition to potatoes, carrots and tomatoes, pickled cucumbers, boiled or canned beans. Fans of a more piquant taste are not limited to this and include in the recipe still olives, lemon or cucumber pickle. Therefore, everything that is appropriate in the traditional solyanka, can find a place in the fish soup of salmon. Cheese with a salmon component is also quite acceptable, but you need to consider when soup is salted, that cheese is also salty. The variety of cheese does not play a big role, it can be both smoked and smoked sausage. You can cook like a soup-puree, but instead of cream, add cheese. The small vermicelli-spiderweb also fits well with the red fish. For any of the above recipes, you can prepare fish soup in a multivark. Even if it does not contain the "soup" mode in the program, the salmon feels great in the "quenching" mode. Do not be afraid of the duration of cooking, pieces of fish and vegetables will retain their original shape. Salmon is a universal fish that can be combined with vegetables, cereals, dairy products and pasta. Therefore, the variety of soups from this fish can be limited only by the imagination of the hostess.

Soup with meatballs: a recipe for a delicious first course for the whole family