Many of us at the mention of figs rememberit was the rubber plant that decorated our houses back in Soviet times. But recently, Ficus Benjamin is very popular - a large and spreading bush, not the most demanding in care. Naturally, fans of this species have a question: how to multiply the ficus? We decided to talk about all possible options, and you choose the right one for your situation. It is important that, before multiplying Ficus Benjamin, the mother plant was absolutely healthy. The best period for getting new individuals is spring and early summer - then young shoots will have time to take root and get stronger by the beginning of the cold season. Ficus Benjamin reproduces in the following ways:

Reproduction by cuttings can be applied tothe overwhelming majority of ficuses, and not just this variety. First of all, cuttings are harvested. To do this, with a sharp knife, it is necessary to cut off the apical, already half-trimmed branches up to 15 cm long. The cut is made obliquely. You can not harvest cuttings with scissors or blunt objects - they will crumple the tissues of shoots and significantly inhibit rooting. Large leaves from the cuttings are removed to prevent excessive evaporation of moisture, and on average leave three leaves per stem. Milky juice, released on the cut, quickly freezes and prevents the development of the root system. Therefore, you need to get rid of it immediately after the cuttings are harvested: you can either wash the juice under running water until it ceases to protrude, or put the stalk in a jar of clean water and change it every two hours. After the juice ceases to stand out, the cut must be dried in the fresh air for a couple of hours. In warm water, the ficus takes root rather quickly. To prevent rotting processes, add a tablet of activated carbon to the water and make sure that the lower leaves do not touch the water. The container where the cuttings for rooting are located should be in a sufficiently illuminated area, but not under direct sunlight. As the water evaporates, water is added. Cuttings need high humidity and heat, and such conditions are much easier to create in a mini-greenhouse. Approximately in a couple of weeks, there may appear light growths, the so-called kalusnaya fabric, from which the roots are subsequently formed. Once the rootlets have appeared, it can be planted in a normal substrate. 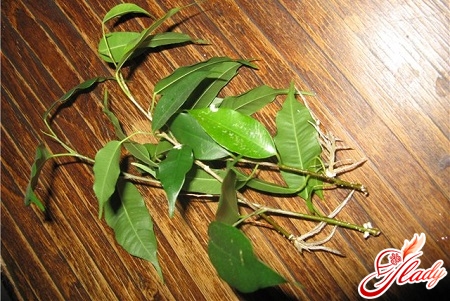 Method of reproduction of Benjamin ficus with cuttings in the substrate

In addition to the standard method of rooting cuttings inwater, propagation by cuttings can be immediately carried out in a substrate: wet sand, peat, perlite or vermiculite. Cuttings are cuttings in the same way as in the previous method, and it is necessary to wash the milky juice. After the cut is dried, it is covered with pounded coal and immersed in the soil on one kidney. To create the necessary conditions, young Benjamin Ficus is covered from above with a jar or placed in a mini-greenhouse with polyethylene. The earth must always be wet, but not dehydrated. Periodically cuttings must be ventilated - this will help to avoid decay. It is better, that the earth was warm, and for heating it is possible to use a heating pad or a warm battery. To understand that the ficus is rooted, it is possible by the appearance of new leaves. But you can not open the greenhouse at once, it is done gradually, accustoming the young plant to new conditions of detention.

In order to get the young Ficus Benjamin,you need a small piece of the stem with one sheet on it from the middle or top of the trunk. In principle, from one shoot you can get as many cuttings as there are leaves on it. The upper cut must be done immediately above the axillary bud, the lower cut in the oblique, then take the greater part of the internodes. In the ground, most of the leaf cuttings are embedded; make sure that the leaf petiole remains on the surface. The leaf itself needs to be rolled into a tube and fixed with a rubber band. You can install a peg through the formed tube - so the stem will be more stable. The necessary number of cuttings is planted in the greenhouse and covered with polyethylene. It requires heating the soil and regular airing of the cuttings. About a month later they will take root and release new leaves. To rooting faster, recommend the bottom of the ficus to make a couple of cuts (depending on the thickness of the trunk, cuts can be more). You can make longitudinal scratches a few centimeters from the bottom cut. The larger the wound surface, the more actively the kalus tissue is formed and, accordingly, new roots will appear faster. Whatever you choose: rooting in water or in the ground, it is desirable to treat the lower part of the cuttings with a special root stimulant. Alternatively, you can pre-soak the stalk in a solution of the stimulant or in the water where the stalk will be, add a few drops of rootstock. Beginners are recommended to multiply Ficus Benjamin cuttings in the water. So much easier to follow the process and you can prevent rotting from below. Small cuttings are conveniently rooted in special pots for seedlings with a removable bottom. In the future it will be very easy to transship young plants into pots with a large diameter. In this way, at home, the ficusBenjamin breeds hard, if not impossible. But if you have seeds, they must first be treated with growth stimulants and fungicides, then sown superficially on a moist and light substrate. Capacities with seeds covered with a film and put in a mini-teplichku. For the germination of seeds, it is necessary to constantly maintain the temperature within 25-30 degrees. After emergence, sprouts need to provide bright light, otherwise the shoots will stretch out.

The industrial procedure, in whichthere is a multiplication of figs of Benjamin. This method is based on the totipotent properties of plant cells. Simply put, its ability in certain conditions and with adequate nutrition to generate exactly the same plant. Each cell keeps complete information about the parent plant and is able to recreate its exact copy. Plants obtained in this way are completely identical, but already free from various infections, if any, in the mother plant. Ficus Benjamin, obtained in this way, is a little more compact in size and well branched.

Poinsetia: leaves fall. What to do?

Zamiokulkas: reproduction of a plant

How to grow strawberries all year round?