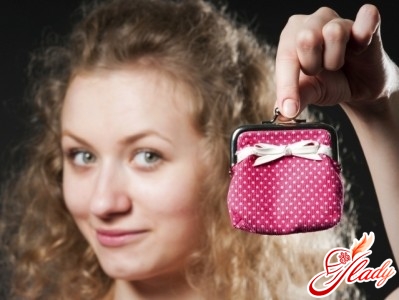 Let's start with what is feng shui? The ancient science of energy and space has a long history. The direction of feng shui methods is focused on creating harmony in the person's personal space, which is vital for attracting the energy of qi - the energy of luck. Starting work is best from the basics, namely with the magical octagon Bagua - a regular octagon, each side of which carries a certain trigram. According to ancient teachings, events and situations occurring in life are divided into 9 categories, united in a certain order. The generalized order of categories and forms the result of Bagua. 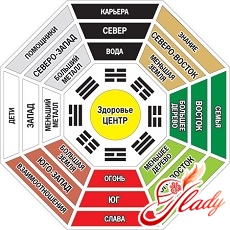 For each of the nine parts of thecompass direction, its trigram, its color and its natural element. Fundamental foundations of feng shui say that this magical octagon should be placed on the plan of your home, from home, apartment and ending with a separate room. With this technique specific sectors of the Bagua are identified. To achieve specific goals, it is necessary to clearly orientate in the relevant sectors and know how to properly activate them. To determine where in your home is located by science feng shui money zone, you will need a compass, Bagua grid and a scaled room plan. Divide the room into nine relatively equal parts - the central and eight parts of the world around the center. The central place is responsible for the creativity and health of the inhabitants of the house, the eastern part for the Family, the northeastern for Knowledge and Wisdom, the northern for the Career, the northwest for Travels and the Help of friends and patrons, the Western for Children, the Southwest - for Love and Marriage, southern - for Glory, and finally, according to Feng Shui, the zone of Money and Wealth determines the south-eastern part of the room. Having worked the skills of working with the octagon Bagua, you can gradually use it for individual rooms.

Colors and elements of the wealth zone

So, with the direction of the wealth zone, we have alreadydetermined - this is the southeast. This zone should be in harmony with its primary colors - purple and green. The main element of the zone is the tree. This sector works on feng shui to attract money and everything connected with them, including power. It's not a secret for anyone that money gives a person power, independence and freedom. Depending on the circumstances and the relevance of specific items, an aquarium with fish, a decorative fountain, or a tree with rounded leaves resembling coins should be placed in the zone. Do not forget that for the growth of the tree requires light, so provide good coverage in the wealth zone. If your tree grows, then, accordingly, incomes will grow. The profitable sector of your apartment must be cleared of blockages in the form of excess items and unnecessary things. They will certainly slow down the flow of money into your home. The wealth zone should be marked by the presence of the symbol of abundance. In order that in accordance with feng shui money went to your house, the wealth sector should "know" about your plans to attract income, namely, to have activators of the wealth zone. About them and talk in more detail.

Chinese natural philosophy says that the managerThe element of the south-east zone is the Tree. For the growth of the tree, first of all, water is needed, therefore the element of water must be introduced into the zone as a matter of priority. Variants can be very different, starting with a bowl with water and ending with an aquarium with live fish. The purity of water is the key to success. Stagnant, dirty water, instead of working on feng shui to attract money, will bring financial problems. If one or two fish suddenly die in your aquarium, then just replace them with new ones at once. It is believed that through their death, disaster is prevented. Excesses in feng shui are not always welcome. Water is a powerful element that requires careful use. It is not necessary to start an aquarium of enormous size, otherwise a large amount of water can "pour" the Tree of Wealth. As an alternative, the element of water can carry a landscape or a picture of water. In feng shui, symbolism is of great importance. 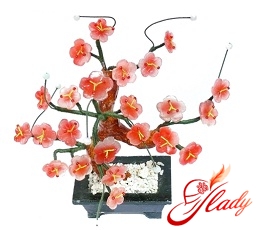 Money tree - cherry More powerfulactivator, than a healthy plant, you will not find a zone of Wealth. Preferably, it is the so-called "money" tree. However, financial well-being helps not only to reach a living plant, but also an artificial tree, which consists of symbolic elements and personifies wealth. If a cactus has settled in the southeastern zone, then the feng shui for money will act on the contrary. With their thorns, the cactus spreads negative energy and will scare away money. Constantly watch your plants, so that they always have a juicy and healthy appearance. The slightest signs of wilting need to be corrected, or to replace the plant with a new one.

Moving items are considered traditionalenrogo activators and can make money literally "spin" around you and settle in your house. "Wind Music", mobile phones, flashing flags will give the universe signals about your desires to attract wealth and prosperity. Using feng shui recipes for money, take on all your creative imagination to come up with symbolic images of the growth of well-being. Even the usual green paper squares located in the Wealth area are able to work for your own good.

How to properly activate the wealth zone?

Activating the wealth zone according to the rules of the hair dryerShui is promoted by good lighting, for this reason, in the south-eastern zone should place decorative light sources or special candles that need to be regularly ignited. The design of the hallway is also important. Near the front door you can place special items that will ensure a constant flow of energy to your well-being in your home. If you adjust the situation in the house in accordance with the theory of allocation of zones, the competent use of energy activators of the zone, the performance of certain rituals, feng shui money in your home will become significantly more, and you yourself can protect themselves from sudden financial losses.

Chinese philosophy and philosophy of feng shui is fullcommunication with various gods, symbolic images of which also help a person to increase his wealth. The God of wealth with an ingot in his hands helps in the issue of monetary success to male representatives, and the goddess of wealth is for women who are striving for business success. 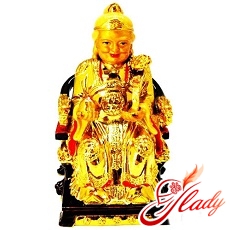 The Goddess of Wealth God Tua Pe Con is another representative of a great cohort that helps to solve with the help of feng shui how to attract money. 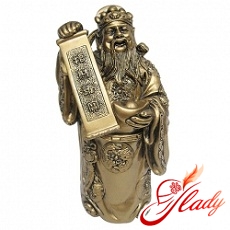 God Tua Pe Cong Great Chinese GeneralGuan Hun won great glory, which over time grew into a religious cult. Guan Hun received the status of the god of wealth and war. In addition, he is considered a defender of businessmen and politicians, who should place the figure of the deity behind the workplace, so that they are always supported by influential people. 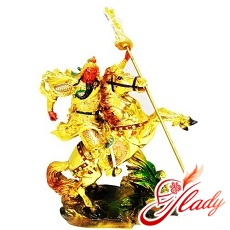 Other activators are symbols of wealth

We have already listed the main activators of the zonewealth - green objects, water, plants, "wind music" and other moving objects. However, you can use other effective symbols of prosperity, which will find their worthy place in the designated zone. For example, "8 symbols of happiness" will bring to life its owner not only wealth, but also good luck and perfection. And the vase of wealth will serve as a very favorable symbol denoting harmony and endless peace in the house. Be sure to put in your vase coins, paper money or gold bars. In the wealth zone, you can use special amulets that activate useful energy. For example, a symbolic gold bar will work for the prosperity and prosperity of your home. The statuette "master of the house" reliably protects savings and multiplies them. 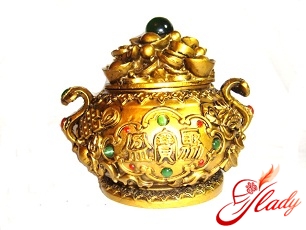 Vase of Wealth Since ancient times ships have servedsymbol of abundance brought by the winds along the water. Having a ship in the house in such a way that its nose was deployed in the direction of the house, you can attract material prosperity, wealth and security. In the boat you can put coins, or money bills. 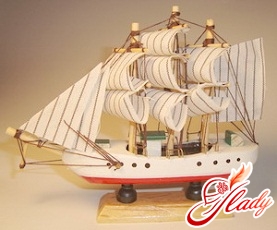 The ship Another reliable mascot servesa statuette of a three-toon money toad sitting on bars, as well as Chinese coins. Coins are usually taken in quantities of a multiple of three, and bandaged with a red ribbon - such a talisman has a wonderful power. The unchangeable coin of Nanbu helps to keep the wealth. 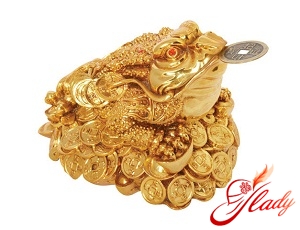 Monetary Toad The fabulous wealth promises to its owner a red money napkin, on which the hieroglyph of Wealth is depicted. 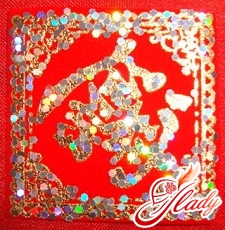 Cash napkin A symbol that is no less active in the money zone is a cat. A wooden cat in the south-eastern zone will take care of your prosperity. Money cat The yang energy is generated by a bat, whose symbol brings happiness, longevity and prosperity to the house. 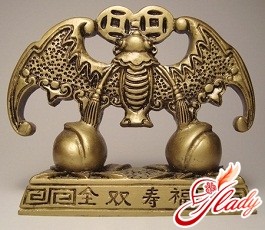 The bat Dragonball appears as a creature with a dragon head and a turtle body that sits on gold coins and ingots, being a symbol of longevity and monetary success. 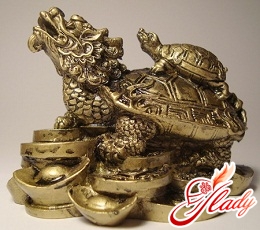 Dragonball One of the happiest fish in China is the gold arovan, bringing prosperity and wealth. The same image is used by the image of an elephant with a toad. Golden Aaron We have revealed to you the theoreticalknowledge of feng shui how to attract money to the house. You have left in practice to apply valuable advice, time-tested, and on your own experience to see the value of the philosophy of energy money. We advise you to read:

Feng Shui purse. Red is the color of wealth?