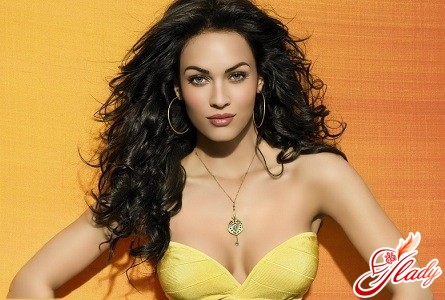 Classics are always instructive and always modern -for it is a classic. But modern girls do not even imagine that their passions on the ideal features that would take, and even try on, were voiced in Gogol's "Marriage". As capricious Agafya Tikhonovna used to say, if Nikanor Ivanovich's lips were to stick to Ivan Kuzmich's nose ... Here are the modern capricious people, staring at themselves in the mirror meticulously and comparing (not in their favor!) A reflection with glamorous photos of foreign and local film stars and pop stars, dream to "make" themselves eyebrows like those of Megan Fox, eyelashes like Penelope Cruz and lips like Angelina Jolie. However, if the last two "samples" can still be argued, the eyebrows of the American Megan, of course, are beyond competition. Why is it that her eyebrows (though everything else is also in perfect order) cause admiration and serve as a model for imitation? What is the secret of such success and can you make yourself the same eyebrows? And most importantly - is it necessary? Let's figure it out.

The secret of Megan Fox's beauty of the eyebrows to the point of obscenityis simple. They are almost perfect. In the sense that they correspond to classical proportions and meet all the rules of make-up. Namely. Her eyebrows look natural - this time. That is, there is no sense of artificially adjusted form, the work of tweezers and pencil. Although, if there is no sensation, this does not mean at all that it is not in fact. Secondly, Megan Fox's brows are thick and dark. This makes the person expressive, "opens" the eyes and even makes them seem bigger. And, thirdly, her eyebrows have a natural smooth bend and the right proportions. The eyebrow begins at the angle of the eye, ends at the line (conditional), drawn from the wing of the nose through the outer corner of the eye, and the highest point of its bend is located on the conditional line drawn from the wing of the nose through the pupil. What else can be noted? Harmonious width and height of the eyebrows. Again, almost perfect proportions. The width of her eyebrows is quite uniform throughout the line. And at the base they are not much wider than at the tips, and at the point of bending the thickness of the eyebrow is almost the same as in its very beginning. The narrowing of the eyebrow along its entire length is smooth and uniform, and the line of the upper border corresponds exactly to the lower line of the eyebrow border. And Megan's brows are symmetrical. If you look at the children's and youth photos of Megan Fox, it becomes clear that such eyebrows are given to her by nature. But if you take a closer look at the modern photos of this Hollywood beauty, you can see that her brows are perfected by the skillful hands of the stylist. To make the same eyebrows, you need to consider everything,that was said above. First of all, the eyebrows need to be corrected according to the classical scheme or the rule of three lines, which radiate from the wing of the nose through the outer and inner corners and the middle (pupil) of the eye. And this, perhaps, is the most difficult in the whole process of transformation. At Megan Fox, the bend of the eyebrows is smooth and even rounded, with no visible corners or creases. Therefore, if your native eyebrows are far from this form, you will have to turn to professionals - in this case, most likely, only corrective tattooing will help. The same procedure will be necessary and in the event that you have eyebrows rare or thin. The easiest way is to cope with the task set for the owners of wide eyebrows. With tweezers, these eyebrows can be given any desired shape and correct not only their width and length, but also the bend line. To achieve a rounded bend, the eyebrows can be plucked not only from below, but also from above, although the upper line of the eyebrow is usually not plucked. Color and density. Megan Fox's eyebrows are dark and thick. She is naturally a dark brown-haired woman with fair skin and gray eyes. It is due to the whiteness of the skin and light eyes that her eyebrows appear black, but in fact they are dark brown and even brought in pencil (shadows) of the same color. Yes, yes, Megan Fox's eyebrows, too, summed up, or rather, skillfully painted. Therefore, you will also need a special powder or eye shadow for eyebrows or a soft cosmetic pencil of dark brown color. By the way, you will need a pencil for imitation of thick eyebrows. In this case, the eyebrows do not draw with a solid line, but with strokes representing individual hairs. You can, for example, dorisovat eyebrows in a dark pencil and shade powder on a semitone lighter. Strictly speaking, this is all you can do with your own eyebrows, trying to portray Megan Fox on his face. But do not rush. Even such perfect eyebrows will suit not every woman. 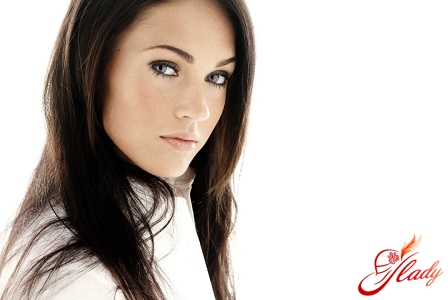 Look at the pictures of Megan. In addition to the perfect shape of the eyebrows, she also has an ideal face oval, as well as a high forehead. If this beauty had a lower forehead, the eyebrows would immediately begin to look different: they would seem too wide and low, and the eyes would make it hard. The same effect would have had her eyebrows and on a slightly shortened face: not oval, but round or square. With a triangular face, this shape of the eyebrows would only aggravate its imperfect shape, making the forehead visually even wider, and the selection already. Accordingly, the person itself would appear short and flat. So this kind of eyebrow will be good only for women with an oval or rectangular face. Megan Fox's eyebrows are so good that it is imperceptible against such a background that such a lack (if it can be considered a defect) of her appearance, as inexpressive eyes, is imperceptible. No, the eyes are good in themselves, but the average is a small size, an unremarkable cut. And if the eyes are large - such eyebrows would clearly be "redundant." Therefore, women with beautiful, bright or just big eyes should give up the idea of ​​repeating Megan Fox's eyebrows on her face. And, of course, the color of the eyebrows. If you are a natural or dyed blonde (light brown-haired, red-haired, light-brown), then such eyebrows are also not for you. Usually, with broad and dense eyebrows, nature awards dark-haired women. For women with blond hair, she offers a "lightweight" option. Therefore, do not strive to thicken and blacken your eyebrows, striving for the ideal you have chosen, but forgetting about the natural harmony. And do not try to repeat exactly what you see in glamorous photos. Take something to the note, use some idea or the principle of its implementation - yes. But here is an exact copy ... You are already good, and most importantly - unique. Should I become a clone of even the most beautiful beauty and lose my personality at the same time? And, having charmed with Megan Fox eyebrows, notice that they simply correspond to the classical scheme of ideal eyebrows and are just suitable for her type of appearance. Yes, they are just very accurately corrected, and their tips are slightly incandescent. Perhaps, only this will be enough for your eyebrows? Love yourself and remain always beautiful!

Mask from honey for the face: miracle-recipes of home cosmetology

Stretch marks on the body: how to make the skin beautiful and supple

How to remove stretch marks on the abdomen?

How to remove the bruise under the eye quickly?

How to protect the skin from sunlight