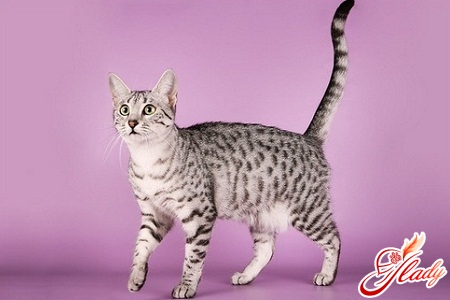 Much that is connected with the history of Ancient Egypt,is still under the cover of mystery: mysterious pyramids, powerful pharaohs, treasures of tombs, sphinxes, sands of time ... No less mysterious and the breed of pharaohs "Egyptian Mau", or, as it is also called some sources - the Egyptian Mau. Images of cats of this breed (and "Mau" and translated as "cat") adorn the walls of the ancient pyramids of Egypt. In general, in Egypt, cats were sacred animals.

The first written mention of cats EgyptianMau belong to the fifth century BC, and the author of these mentions is the ancient Greek historian Herodotus (he in general told a lot about the world). Herodotus reports that for three thousand years before Christ every Egyptian kept a cat in his house. True, what they were, Herodotus does not tell. The very fact of the numerous domestic cats in Ancient Egypt is not surprising. It is known that cats were appreciated and respected there. To these sacred animals the Egyptians were treated with divine veneration. In the temples there were numerous statues of the goddess Bast and cats Bastet. And the supreme god Ra was often portrayed as the Great Cat. Up to now, images of a red cat (God the Sun), a knife of a snake cutting off a head, have been preserved. And the original appearance of the Sun in Egyptian mythology is a cheetah (also a cat). Even the death of ordinary domestic cats was accompanied by a sacred ritual. When the cat died, it was mummified. The mummies of cats were encased in gold and silver sarcophagi, inlaid with precious stones. During the archaeological excavations in the city of Beni-Hassan, a whole cemetery of cats with burials of one hundred and eighty thousand (!) Mummies of cats was discovered. It is also known that the owners, in a sign of sorrow for the deceased cat, shaved their brows and wore mourning for many days.

Its long pedigree exotic catEgyptian mau leads from cats of great pharaohs. This is a very ancient breed, formed as a result of natural selection. The appearance of cats mau has not undergone any noticeable changes for more than three thousand years. For a very long time this ancient breed was preserved only in its homeland. And the modern history of the breed of cats of the pharaohs began a hundred years ago. European breeders of cats have planned to recreate the breed of Egyptian mau. But the first results of the reconstruction of the breed were "brought to nothing" during the Second World War. The second attempt, culminating in success, was undertaken in the fifties by the Russian princess Natalia Trubetskoi, who lived in Italy. Princess was the owner of two cats Mau (Gepa and Ludol), brought from Egypt. Trubetskaya registered them in the FIFe association, and after she immigrated to the United States she founded the Fatima kennel. As a result of the long and painstaking work of American felinologists, the Egyptian Mau was recognized by the CFA as the official breed in 1977. In Europe, these cats were brought in 1988, and they first entered Russia in the summer of 2010. They were purchased by Polina Gorelkina, owner of the EgyptSila cattery (Egyptian strength). 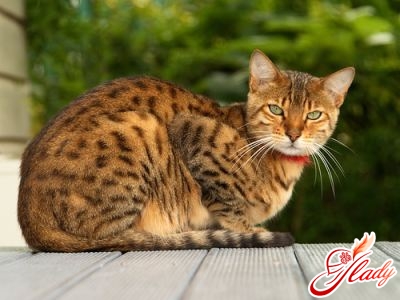 Features of the exterior of the cat of the pharaohs

The Egyptian Mau is a leopard in the mind. Her, by the way they call it: the leopard for the living room. But dark specks are not the only marks on the fur coat. A distinctive feature of these cats is bracelets and necklaces. Necklaces - contrasting stripes around the neck, and bracelets - half rings on the upper part of the front paws. In addition, the real cat of the pharaoh is marked with the scarab sign. This is a dark figure in the form of the letter W, located at the level of the ears, connected with the "letter" M above the eyes. And eyes ... Eyes of Egyptian cats are exceptionally green, large and almond-shaped. Like the true Egyptian Egyptians, Pharaoh's cats have a "make-up of the goddess": two long arrows that emphasize the eyes and pass over the cheeks to whiskey. Another unusual feature of the appearance of Egyptian mau cats is small folds-pouches in front of the hind legs. It is generally believed that these folds, hanging under the belly, are needed for the swing of the hind legs with fast running and high jumps.

Egyptian Mau is a type of cat that resembles Abyssinian. The CFA standard sets the following requirements for the breed.

Disqualifying signs of the Egyptian mau breed: the absence of characteristic markings, the yellow color of the eyes.

Egyptian Mau is special not only its ownpedigree and catchy appearance. It is also characteristic of the distinctive (sometimes contradictory) qualities of character. So, for example, the cats of this breed are both independent and devoted to their masters, balanced and passionate. Cats Mau are very energetic. They love walks and even agree for this purpose to wear a collar or harness. They are flexible and flexible, playful and sociable, do not stand alone. Have a melodic and expressive voice, which can always recognize the emotions and mood of the animal. Like all cats, mau do not lack the desire to sweetly sleep after dinner or to luxuriate on their knees from the owner. At the same time they are unobtrusive and always feel whether the person is located to such communication or not. With an abundance of joyful emotions, cats jump on the front (!) Paws, wagging their tail so quickly that it simply can not be seen. 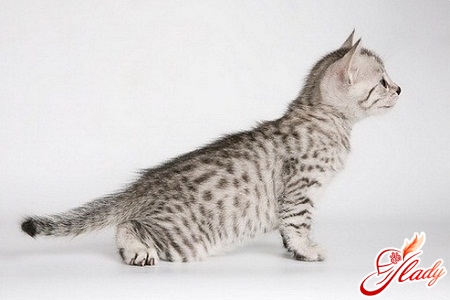 Care of the cat

Like all pet cats Egyptian Maurequire attention and care on the part of the owner. And first of all, her wonderful coat needs her care. These cats are useful even just to stroke, not to mention the fact that they need constant combing of hair: both help to remove dead wool. For daily combing you need a special comb with frequent teeth, and for a periodical more intense combing - a rubber brush. In addition, it is also useful to polish the wool with a soft suede, nylon or silk handkerchief. Hygienic procedures consist in removing excess ear secret, cutting claws and bathing the animal as needed. It should also monitor the condition of the teeth, and for the health of the cat as a whole.

Egyptian Mau - a breed of cats is still verysmall, and therefore still rare and expensive. Most of the representatives of this breed live with the United States, but there is also a nursery of the Mau and in Europe (Germany, Italy, Holland, France). In Russia, so far there is only one nursery Egyptian mau, which is located in the Moscow region and is called "Egyptian force". Therefore, it is quite difficult to purchase this rare cat, but, as the true connoisseurs of the breed say, such a cat is worth the money spent on it. We advise you to read:

How to tell a cat from a cat

Education of cats is not easy

How to accustom a cat to a toilet bowl?

Mastino neapolitano - everything about the breed