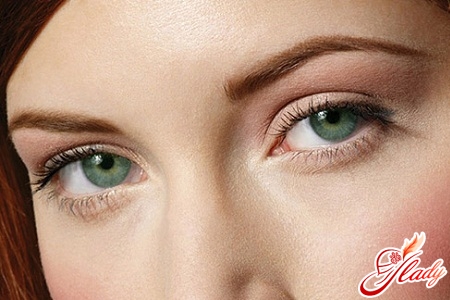 Modern humanity suffers from the mostvarious diseases. This is explained by various factors - the conditions and way of life, its high rate and the impact of unfavorable external factors. The human visual system did not become an exception to the rules. There is a huge number of different diseases of the visual system. And in this list is not the last place takes retinal dystrophy. The most vulnerable to this disease are people of advanced age, especially those suffering from such diseases as hypertension and diabetes. Alcohol abuse and smoking also greatly increase the risk of developing retinal atrophy.

Structure of the retina

Before talking about such a disease asdystrophy of the retina of the eye, it is necessary to tell our readers what the retina of the eye is and how it is needed. A thin layer of nerve cells, forming the inner shell of the eye, is the same retina. The retina consists of two parts - the back and front. Nerve cells - photoreceptors designed to absorb light, form the back of the retina. From these same photoreceptors, nerve impulses that carry certain information transmit it to the central nervous system, and thence to the brain. And already there, in the visual analyzer, the processing of the received information takes place directly. In the anterior part of the retina, such photoreceptors are not present. Despite the fact that the retina itself is very, very thin, it consists of several layers, each of which performs its own function. For example, the outer layer of the retina, the so-called pigmental layer, is very closely related to the middle, vascular, shell of the eye. In the very center of the retina is a blind spot - the disc of the optic nerve, which does not contain photoreceptors. In the immediate vicinity of the central nerve disc is the macula, a yellow spot in the center of which is a peculiar fossa, in which the image is the most qualitative. That is why in the event that there is a destructuring (changing) of the retina in this place, all eyesight is greatly reduced. If other parts of the peripheral retina are changed, then the patient's field of vision is very narrowed, depending on the localization of the affected source.

The process of retinal dystrophy

In the event that in the cells of the retina is brokenthe normal process of metabolism, as a result of which qualitatively and quantitatively altered metabolic products accumulate in the cells, retinal damage, expressed to a greater or lesser extent-dystrophy, can occur. There are many reasons for the development of retinal dystrophy. As already mentioned above, such reasons include smoking, and alcohol abuse, and diabetes. Also, the reasons that can trigger retinal atrophy include:

Strictly speaking, most often the violationblood circulation in tissue cells and develops retinal dystrophy. This process is very typical for people of advanced age. However, in some cases, dystrophy can develop in young people. So, for example, it can quite happen in the event that a person suffers from severe short-sightedness. The pronounced short-sightedness leads to the fact that the transverse size of the eyes greatly increases, and accordingly the pressure on the eye shell becomes several times stronger. In addition, the development of retinal dystrophy can lead to eye injuries, especially if the mucous membrane is damaged. And also retinal dystrophy can provoke any chronic diseases of the eye or cardiovascular system, kidney disease, leading to frequent increases in blood pressure. And one more provoking dystrophy of the retina can be a strong effect on the human body of various toxins - simply speaking, poisoning. 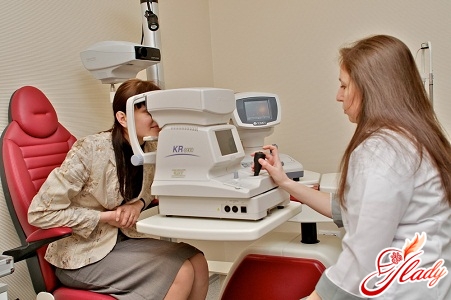 Types of dystrophy of the retina, its signs

Doctors divide the atrophic retina into twosubspecies, each of which has its own causes, features of the course of the disease and prognosis. So, the dystrophy happens: Central dystrophy of a retina of eyes There is a central or, as it also name, the generalized retina of eyes in area of ​​a macula - that place in which vision most clearly. The reason for the development of such a complication is almost always a pathological change in the vessels of the eyeball, most often of exclusively age-related nature. In this case, the development of the disease is extremely slow - for several years. Clarity of vision disappears not instantly, but gradually. Particularly bad people see those objects that are located near it. As a rule, in the event that central dystrophy is not accompanied by a peripheral one, the onset of complete blindness does not occur. Vivid signs that a person suffers from retinal dystrophy is the presence of such signs as the distortion of the image, the appearance in front of the eyes of various spots, most often colored ones. Also, these features include the doubling of objects, to which such sick people complain often enough. However, of course, in no case should we forget that all people are unique - someone may have all of the above signs, and someone has only one of them. The central retina also has two subspecies:

Peripheral dystrophy of the retinaperipheral retinal dystrophy affects any other parts of the retina. The special insidiousness of this disease lies in the fact that in most cases it proceeds almost asymptomatically - only occasionally flashes of bright spots in front of the eyes can appear in a sick person. However, most often this type of retinal dystrophy is revealed quite by accident - with a routine examination by a doctor - an ophthalmologist.

Regardless of what the reasons wereis caused by the development of retinal atrophy, the bottom disease needs immediate treatment. And the sooner the treatment is started, the more effective it will be. As a rule, with the help of treatment, it is not always possible to restore the level of vision completely - but the earlier it is started, the higher the chances of success for doctors. First of all, for the treatment of retinal dystrophy, it is necessary to eliminate or minimize the manifestation of those diseases that, in fact, are the cause of this disease. And only after this is done, the oculist doctor will begin to directly treat the retina dystrophy of the eyes. Today, an argorine laser is used to treat retinal atrophy. It is used to strengthen the retina, and in the event that the disease is already in an extremely neglected state, the laser makes it possible to limit the detachment of the retina. The principle of the laser treatment is the following - the effect of the laser entails an extremely sharp rise in temperature. The rise in temperature, in turn, causes the tissues to coagulate. The operation is absolutely bloodless. In addition, the laser has an extremely high accuracy and allows effectively splicing the stratification of the vascular and reticular membranes of the eye. This operation is carried out as follows: a sick person is put on a damaged eye a special contact lens, which has an antireflective coating. Thanks to this contact lens, the doctor is able to penetrate the eye. The laser beam itself is fed through a special slit lamp. And the surgeon with the help of a stereomicroscope has the ability to focus the laser beam on the required area, and monitor the overall course of the operation. Concluding the conversation about the degeneration of the retina, it is necessary to remind once again that the earlier the disease is revealed, the better its treatment. Therefore, any person must regularly visit a doctor - ophthalmologist for preventive examinations. We advise you to read:

Removal of papillomas at home. Is it worth the risk?