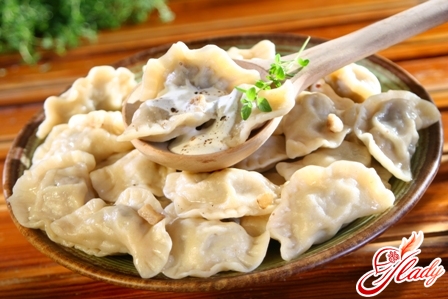 A piece of dough with wrapped in it stuffing ...Cooked on steamed, boiled or fried, these "envelopes" became the basis of different dishes in the kitchens of many peoples living in different parts of our planet and radically different from each other mentality, habits, way of life and cultural traditions. And it does not matter how this food is called: vareniki, dumplings, pita or buritos. We will not talk in detail about all the listed products from the test today. We will learn to cook vareniki with potatoes. By the way, you know that the recipe for this dish does not exist in the only way. Rather, the principle of cooking is one, but the number of types of dough, from which dumplings with potatoes are prepared, can surprise the most sophisticated cook. And the filling ... However, we will present several recipes for the test and filling, as well as a recipe for the preparation of vareniki with potatoes, which are a favorite dish for many families. But let's begin, of course, with the basic recipe. Then go to the dumpling test. By the way, the recipes of such a test are also surprising by their multivariance. Someone prepares it according to the test principle for dumplings, but any cooking guru will say that these are different dishes and the dough for them must also be different. In Ukraine, where vareniki, like borsch, are cooked in the village and in the city, each housewife keeps her own recipe, which is passed down from generation to generation. And in the end we learn the recipes for the preparation of the filling. Let's start?

Preparation: First you need to knead the dough from two glasses of flour, one egg, salt and a glass of water. Boil the potatoes and whip his blender. Finely chop onion and fry in vegetable oil. Half the fried onion add to the potatoes, add salt, pepper and mix thoroughly. The dough is divided into two parts and rolled each into a fairly thin layer. Spread out the filling, cover with a second crust and cut with a dredge of vareniki. The second option: roll the dough into one layer, cut out round billets from it. Then put stuffing on each piece, fold the dough in half so that the filling is inside, and patch the edges. Put the vareniki in boiling water and boil in it for three to five minutes after surfacing. Serve on a table with fried onions. 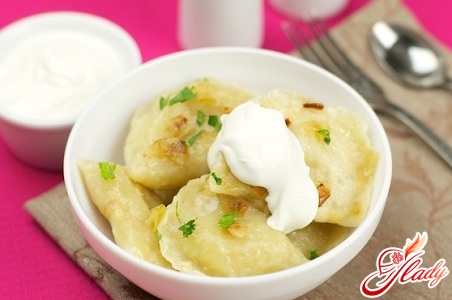 Preparation: On the board, pour out the sifted flour with a slide, make a hole in it, add salt, hammer in the egg and begin to knead the dough, gradually adding warm water. The output should be a soft dough, which easily lags behind the hands and from the board. Cover the dough with a bowl and leave it for 30 minutes, and then mold it with vareniki with potatoes. Recipe for dough with yogurt Ingredients:

Preparation: We prepare the dough, as in the first variant, but instead of water we use kefir. It turns out a very delicate dough, respectively, delicious dumplings. The filling can be any.

Yes, yes, there is such a variation of the test. If you happen to visit Transcarpathia, then there dumplings from yeast dough - the crown dish of any hostess, Ingredients:

Preparation: Yeast diluted in a small amount of water with sugar. Pour the flour into a bowl, add salt, egg and the yeast. Mix all the ingredients and knead the dough, gradually pouring water. Ready dough should not stick to your hands. The test is allowed to last about half an hour, and you can start making vareniki. Note: If dry yeast is used, the amount is determined in accordance with the recommendations on the package.

Preparation: Water pour into a saucepan, add salt, oil and bring to a boil. Make a small fire and gradually pour the flour into slightly boiling water, stirring all the time until the flour is boiled. Slightly cool the dough (it should be warm, but not hot) and introduce the eggs one by one, carefully mixing them into the dough. Pour the flour on the board and knead the dough to make it soft, delicate and well-knit. Cover with a bowl to make the dough distillate and not become weathered. The brewed dough for the dumplings is ready. Recipe with vegetable oil Ingredients:

The technology of cooking is the same as in the firstoption. This dough is good because it can be cooked, as they say, for the future and stored in a freezer - it does not lose its qualities after freezing. It is very convenient: there is always the opportunity to cook dumplings, as they say, in a quick way. That's why, starting up a brewed dough, it is worth immediately making a large portion, so that at hand there was always such a semi-finished product. 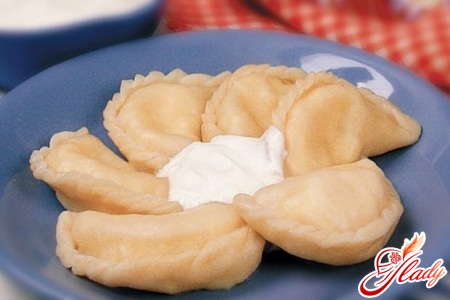 This is a win-win dish: delicious, fast, inexpensive. And his recipe - a real wand-zashchalochka for any working woman. Ingredients:

Preparation: Stir the potatoes and grind well, add salt, egg and flour. Mix thoroughly. Allow the dough to brew. Then from it you can make lazy vareniki with potatoes. Note: This dough can be stored in the refrigerator for several days, and in the freezer - and that longer.

Preparation: My potato, clean, cut into pieces and boil. While potatoes are brewed, fry onion and finely chopped onions. Cooked potatoes are kneaded in mashed potatoes and mixed with onion roast. Solim and pepper to your taste.

Preparation: Very tasty vareniki are obtained if to the potato add mushrooms - dried or fresh. Dried mushrooms must be pre-soaked, and fresh just washed. After that, cut mushrooms into small pieces and fry together with chopped onions in vegetable oil. We boil the boiled potatoes in mashed potatoes and mix with mushrooms, add a little butter. Solim at your discretion. 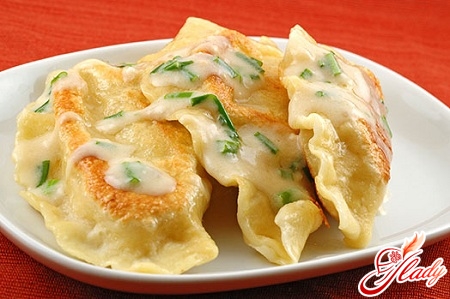 Filling with potatoes and bacon

The recipe for food lovers is delicious and satisfying. Ingredients:

Preparation: Boil the potatoes and make a mashed potatoes. Salo cut into pieces and cook from it cracklings, laying on a dry hot pan. Mix the crushed potatoes with lard and stuff them with vareniki.

Preparation: My potato, clean and rub on a large grater. Season it with salt and leave it for five minutes. Then carefully squeeze the grated potatoes and after that add the black ground pepper. Well, dear cooks. Now you know how to cook dumplings with potatoes. Believe me, having tried different recipes, you are sure to find among them the recipe that will become your business card. Because absolutely identical vareniki can not happen in different housewives. After all, the taste of any dish depends not only on the ingredients that the prescription implies, but on the state of mind and emotional mood of the chef himself. And vareniki with potatoes - is no exception. So cook with pleasure, and a pleasant appetite for you! We advise you to read:

Fried duck with apples: it's impossible to resist!