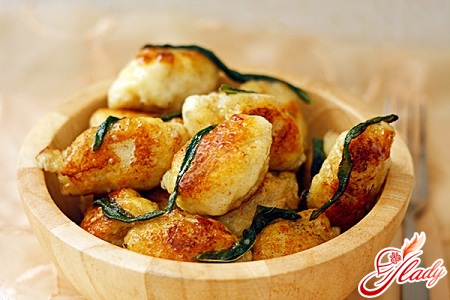 Do you know who invented lazy vareniki? And no one knows. This dish is so universal and multinational that it does not make sense to claim authorship. It is known not only under the name we are accustomed to. Lazy dumplings are called dumplings and dumplings (in Russia, Ukraine and Belarus), in the Czech Republic they are dumplings, in Italy gnocchi, and Finns have klimpiruokka. In short, the essence is one, the filling is different, different tastes. Simply, once, one observant hostess noticed that the ingredients for this dish are taken practically the same as for full-fledged traditional vareniki. But it takes only time and energy to cook much less. Lazy, and that's it. But these are only assumptions. As it was in fact, forever will remain unknown. But really the recipes of this dish ... In general, choose.

Lazy vareniki in the classic performance isvareniki with cottage cheese. Cooking them is very simple, but in comparison with these, full-fledged vareniks fast. Serve them, usually with sour cream or with melted butter. For the children's menu, this dish is supplemented with liquid jam (cherry, strawberry) or jam (apple, orange). Ingredients:

Preparation: To cook such vareniki is better with crumbly or, as they say, with grain cottage cheese. Cottage cheese we lay out in a bowl, we add to it eggs and mix well. We sift the flour and mix it with salt, and then pour it into a bowl of cottage cheese and knead the dough. Sugar in the dough to put it is not necessary, otherwise the vareniki will dissolve. The amount of flour depends on the fat content and consistency of the cottage cheese. If the cottage cheese is dry, then we put less flour, and if it's fat and wet, then add more. As a result, a sufficiently dense dough should be obtained, which can easily be formed. In a saucepan pour water and put it on the fire. While the water boils, make a sausage from the dough and lay it on the flour-poured table. Then cut from this sausage oval or round lozhechki thickness of about a centimeter. Each loaf is rolled in flour and put into boiling water. By the way, if salt is added to the dough, then you do not need to salt water, and if you make a dough without salt, then pour water. When you lower the dumplings into the water, add fire. As soon as the water boils, make it smaller and cook the dumplings until they pop up. Ready dumplings we take out with a noise from a saucepan, we pour with melted butter and sprinkle with sugar. Serve with sour cream, condensed milk or jam. If desired, you can put raisins or finely chopped dried apricots in the dough, and add vanillin for the flavor. 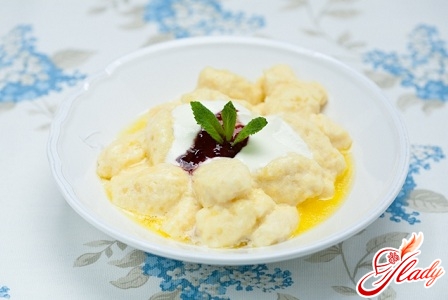 Lazy vareniki with a manga

Another version of lazy vareniki with cottage cheese. Its difference from the previous one is only that part of the flour here is replaced with semolina. Ingredients:

Preparation: We pour the egg into the bowl and shoot it with sugar. Then add the butter and vanillin and stir until the sugar completely dissolves. Then we put cottage cheese in this mixture and mix it again. Add cottage cheese, mix again. Lastly, put the mango and put it in a warm place for about an hour, so that the mancha swelled. After an hour, sprinkle (abundantly!) The table with flour, spread the dough on it and mix it to the desired density. While we knead the dough, we can boil water. And then we proceed traditionally. We make from the dough sausage, cut it into slices, which then we lower into boiling water. Cook until the dumplings come up. Serve with sour cream or condensed milk.

If there is a potato filling for traditionalvarenikov, then, lazy vareniki with potatoes can also be cooked. And they cook such vareniki not only in our country. In Italy, for example, this dish is called gnocchi, and in the Czech Republic, potato dumplings are prepared. In Ukraine and in Belarus they make potato dumplings, and in the Urals they are called sloths. That's it's the potato sloths we'll try to cook with you. Ingredients:

Preparation: Mine, clean, cut into small pieces and set to cook potatoes. When it is ready, drain the water and mash the potatoes into the porridge. Adding creamy butter and warm milk to the potatoes, whip the mashed potatoes. Let's mash a little cool and mix it with eggs and sifted flour, salt to taste. We knead a dough. We put a pot of water on the fire, in which we will prepare vareniki. Onion shred and fry in hot vegetable oil. For the test, we do not need it, so we leave it in a frying pan, and we start to make dumplings ourselves. From the dough roll the sausage and cut it into small pieces. Each piece is crumbled in flour and put into boiling water (salty). We cook them first on high fire, and as soon as the water starts to boil, the fire is diminished. When the dumplings come up - they are ready. We take them out of the pan, pour on onions and serve them on the table. Note: Fried onions can be added to the dough. And potato sloths are served with a roast of onions and squash or just watered with melted butter and sprinkled with fresh herbs. By the way, you can cook such vareniki from cold mashed potatoes. This is a great way to profitably "recycle" the remnants of mashed potatoes, which on the second day is no longer so delicious. But in the vareniki it will be - the most it!

Preparation: Cook the potatoes, after washing it and peeling it off. Welded potatoes mash in puree. Separate the egg yolks from the proteins. We lay out the yolks in puree, whisk the whites. To the puree we add cottage cheese, sifted flour and starch. We mix everything well and, in the last place, put whipped proteins into the dough. Knead the dough, to which if necessary, pour the flour for the desired density. We set to boil water in a saucepan, and in a brazier with vegetable oil fry finely chopped onion. From the dough, we form the sausage, laying it on a table dusted with flour. From this sausage we cut the lozenges, we pour them into flour and put them into boiling water, which we pre-salt. Keep in mind that dumplings should not completely fill the pot with water, but should float freely in it. Therefore, take a large pan. Pop-up dumplings are taken out of the pan and watered with onion roast. Fans of ketchup and mayonnaise can season vareniki with these sauces, and they can be sprinkled with sour cream and sprinkled with fresh herbs. 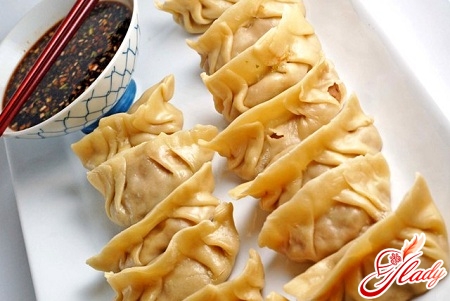 Here we are close to the secrets of Czech cuisine. Because the famous dumplings are ordinary lazy vareniki or dumplings. No, of course, Czech dumplings are cooked not only as dumplings or dumplings, they make them bread, with a filling of meat and onions, marmalade and plums or without any filling. And we will prepare Bramborove knedliky - dumplings or vareniki with potatoes. Ingredients:

Preparation: Dumplings can be cooked with mashed potatoes or raw potatoes. We will do them in the second variant. For this, we will thoroughly wash the potatoes, clean and crush them with a small grater. Pickle the potatoes and squeeze off excess juice from it. Then add to the grated potatoes egg, yolk, sifted flour and semolina and knead the dough. From the dough, roll the sausage on a flour-poured table and cut it into slices. We cook dumplings, dropping the pieces of dough wrapped in flour into boiling water. We serve with onions fried in vegetable oil or with sour cream. And in the Czech Republic, Bramborove knedliky is served with lenton greaves and sauerkraut. Note: Very lazy vareniki in Czech you will get in the event that the test does not roll out the sausage. Simply separate small pieces from the spoon and dip them into boiling salted water.

Gnocchi - lazy vareniki in Italian. And we will cook them according to all the rules, although it takes a lot of time. Ingredients:

Preparation: Boil the potatoes in a peel, before washing it thoroughly. While the potatoes are brewed, soak the mushrooms. Cooked potatoes are cleaned and pressed with a fork, turning into a mess. Mushrooms are crushed to the same state using a blender. Then we spread in a bowl the mashed potatoes, milled mushrooms, all flour and half a glass of grated cheese. We put salt and black ground pepper to taste and mix the dough. If it turns out to be too steep, then dilute the dough with water, in which the mushrooms were soaked. We put the boiling water in a saucepan. In the meantime, we roll out the dough on a flour-poured table, forming a narrow long sausage from it (not more than one and a half centimeters thick). With a fork, we apply corrugation to the sausage and cut it into pieces in the length of two or two and a half centimeters. When the water in the saucepan boils, we throw gnocchi into it. While our vareniki cook, prepare the sauce. To do this, melt in a saucepan a tablespoon of butter, add sliced ​​sage leaves (or a pinch of dry seasoning) to it and pour half a glass of water from a saucepan in which gnocchi are cooked. When the dumplings come up, take them out of the saucepan and put them into the sauce. Add the remaining half a glass of grated cheese to them and mix. Serve with a green salad. 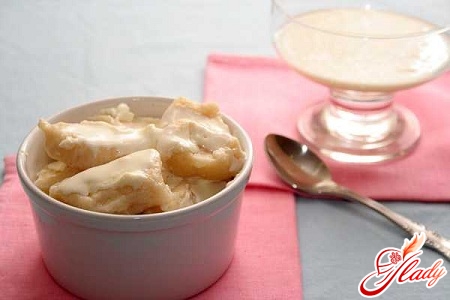 At the end of the parade of our recipes we offer you a superlenous version of lazy vareniki. For such dumplings, you do not even need to knead the dough! Ingredients:

Preparation: To cook such lazy vareniki, we take any small pasta: shells, horns, spirals, but not spaghetti. Boil the pasta, salt them with water and put into a frying pan with preheated butter. In the same frying pan we put cottage cheese, a couple of pinch of salt and sugar to taste. We mix everything thoroughly, warm it under a closed lid and serve it to the table with sour cream, sprinkling sugar on top. Do you see how many recipes lazy vareniki exist? And, we will notice, some of them lazy you will not name - so much time and forces occupies their preparation. However, whatever one may say, they are prepared all the same faster than traditional vareniki. Try and you prepare some version of this simple and hearty dish. Do not all spoil yourself with delicacies! Enjoy your appetite and success in the culinary field! We advise you to read:

Pilaf with chicken in the multivariate: recipe

Tomatoes stuffed with cheese and garlic