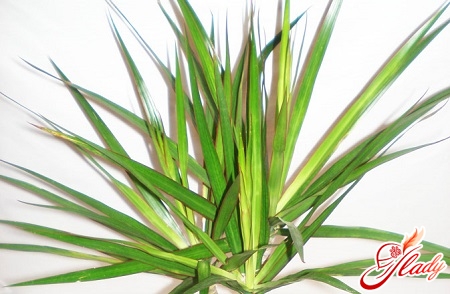 One of the problems in the cultivation of dracaena isthe fact that it grows quite high and rests against the ceiling. Dracaena is a very beautiful, palm-like plant, but from lack of light its shoots become thin, long and cease to hold in an upright position. And when the branches of this plant break apart and the leaves fall off the lower part of the trunk, making it naked, the dracaena loses its appearance and becomes less attractive. In this case, it is worth thinking about how to rejuvenate it, by multiplying the plant. At home, the dracenes of such varieties as fragrant and fringed are relatively easy to breed. It is best to propagate the dracaena in spring, in March and April, at which time the growth processes are activated. If the plant is propagated at another time of the year, the rooting process will take much longer. Basically, the Dracaena is propagated in such a way as cuttings. For cuttings, you can use both a stem without leaves and an upper part of the plant with leaves. 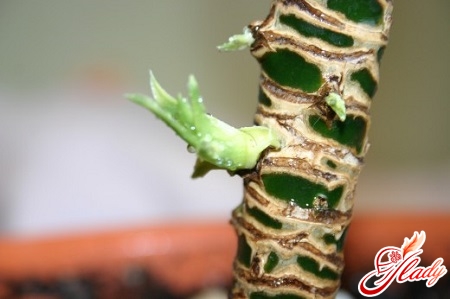 This way of breeding dracaena is also called"Reproduction of the crown". The upper part of the stem with leaves, approximately 10-15 cm long, is cut with a sharp knife or secateurs. At what angle the cut will be made, does not matter much. It can be made obliquely or evenly. It is very important during the cutting not to break the stem, the cut must be smooth, and the bark is not touched with a knife. If the cut is jagged and cracks appear on the stem, such a stalk does not take root, but simply rot. After it is cut, it can be directly rooted or held in the air for a couple of hours, but only at room temperature. Root apex stems should be in water or in the ground, intended for palms and cacti, in hydrogel, as well as in inert materials such as sand, vermiculite and perlite. Before proceeding to rooting in water, a whole tablet of activated carbon should be added to it. This will help the water not to deteriorate too quickly. Also in the water you can add any drug that promotes the rooting of plants at home. It is necessary to ensure that water is constantly at room temperature, and replace it every three to four days. Breeding a fragrant or fringed dracaena is not an easy task. The stem can rot in any substrate. Most often, decay occurs in soil soils. This is promoted by microorganisms that are present in the soil, destroy the tissues of the cuttings and feed on the organic constituent of this soil. If the soil in which the dracaena stalk is rooted will be permanently wet, the decay will begin immediately. In parched soil, newly formed, the young roots will dry up. It is best to root the cuttings in the conditions of a small greenhouse, under plastic, glass or a transparent package. The air and soil temperature during rooting should be plus 20-22 degrees. Leaves should be sprayed with standing water at room temperature 4-5 times a day. It is also important for rooting cuttings in the morning and in the evening to take shelter for fifteen minutes for ventilation, this will remove excess moisture. 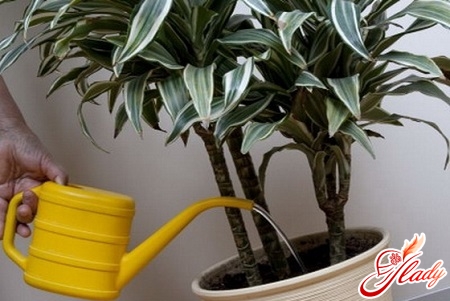 Propagation of the dracaena with stem cauliflower

For the propagation of the dracaena by stem caulis inhome conditions you need to choose a withered, elastic stem of normal color and cut it into cuttings 5-20 cm long. Cut them with a sharp knife along the leaf scars. Rooting is best done in sand, soil soils or mge-sphagnum. The stem cuttings take root well under the same conditions as the apical cuttings, only at a temperature of 20-24 degrees. Most often the cuttings take root within six weeks, and approximately on the ninth there are new, young shoots. In case of improper conditions the cuttings die or root, but the rooting takes much longer. Dracaena reproduces by rooting stalk cuttings in two ways, horizontal and vertical. With vertical rooting, it is necessary to load the stem with the lower part into the moist substrate to a depth of 3 cm. If rooting takes place in the soil, it is necessary to place a layer of sand 5 cm thick on its surface. This is necessary in order not to damage the young roots by a rapid transplant. The stem will first take root in the sand, and later its roots will descend into fertile soil. With horizontal rooting cuttings dracenes are laid on the surface of the substrate and slightly pressed into it.

Diseases of indoor roses and care for them

Mulching and types of mulch

Heavy fence: bushes in the country