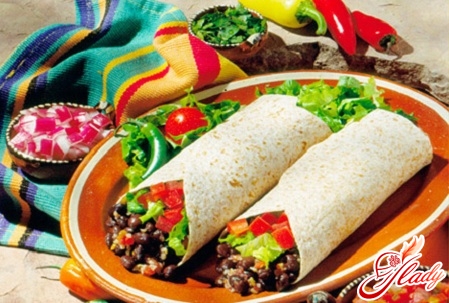 Oh, long ago there are times when, with an easy feedNikita Sergeevich (who promised the Americans Kuzkin mother to show) corn was the queen of the fields. And the corn was then sold in corn stores, and the corn flour was - zalis! But no, dishes from corn flour do not take root in our East Slavic cuisine. Meanwhile, corn flour (like cereals) has been a very popular ingredient in kitchens of different peoples to this day. Many people heard about the famous Italian polenta or Moldovan hominy, Mexican tortillas or Georgian mchadi. Americans (southern and northern) still honor corn, and in Southern Europe it remains in high esteem. And we ... We have nothing to boast about in this respect (except sweet corn sticks of Soviet times). Therefore, we can only learn the art of cooking dishes from cornmeal, the recipes of which were inherited by modern people from the ancient Aztecs.

If we talked about the Aztecs who foundedMexico, then we will start to learn recipes of dishes from corn flour from Mexican tortillas. These corn tortillas are delicious and themselves, and as the basis of many dishes of Mexican cuisine. For real tortillas you need an open fire and a special clay pan. But we will perfectly cope with them and in a conventional skillet. Ingredients:

Preparation: Margarine finely chopped with a knife. We sift the flour and add it to the margarine, in the same place - a pinch of salt. We spread the margarine with flour into a crumb and, gradually pouring in water, mix the dough. We divide the dough into several parts (by the number of future flat cakes), cover with a towel and leave the minutes for fifteen. Then from the dough roll out round thin cakes and fry them from both sides on a dry (without oil!) Hot-frying pan. Tortillas ready! You can eat them instead of bread, but you can go further and cook ... On the basis of tortillas, you can prepare toastados - the same flour tortillas, but fried in oil. If between two tortillas put stuffing, sprinkle them with cheese and fry in oil, then the result will be quesadilla. And if a cake with a filling topple in a tube, then the dish will already be called burrito. It's funny. Is not it? But only Mexicans are amused. And, for example, Georgia is preparing more "laconic" corn tortillas. 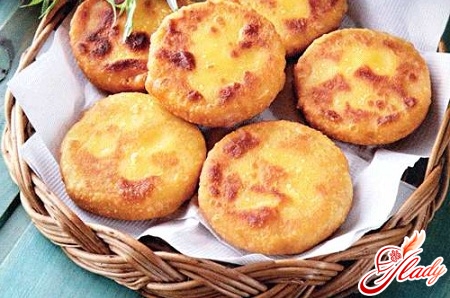 The recipes for mchadi and tortillas are very similar, but they are different dishes. If it's interesting to "feel the difference", prepare both options and compare. Ingredients:

To the sifted flour, add a piece of butter,a pinch of salt and, pouring water, mix a soft and slightly sticky dough. With wet hands, we form out of the dough oblong cakes, which we put on a heated frying pan and bake in the oven. Such a method of preparing mchadi is the closest to baking them in the traditional stone pans "ketsi". But many housewives fry mchady in a frying pan in vegetable oil (like ordinary cutlets). Serve these cakes with cheese (ideally - Imeretian or suluguni).

By and large polenta - it is hearty and tastyporridge, which was originally considered a food for the poor. But over time, it "bite" and more wealthy Italians, and even more "ennobled". Recipes polenta differ mainly in additives. It is prepared with cheese, vegetables, mushrooms, seafood, minced meat. First try to make a polenta with cheese. Ingredients:

Preparation: Prepare the polenta cheese (napped on a grater) and garlic butter. For the latter, melt the butter in a frying pan and fry in it a crushed clove of garlic. For polenta we take only a thick-bottomed pan. Water and milk are poured into a saucepan and boiled. Then add the crumbled bread there and, constantly stirring, pour out all the flour. Cook it on low heat, without stopping to interfere (it is more convenient to do it with a wooden spatula). After cooking the polenta for about fifteen minutes, add the grated cheese to it. We add in small portions, waiting for the whole cheese to dissolve in the porridge. At the very end, pour garlic oil and remove the pan from the fire. Serve with greens. 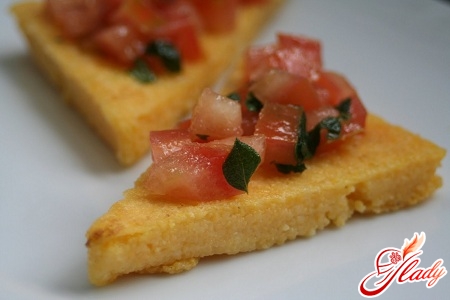 Are you surprised? No, of course, the master of literary horror stories did not invent this recipe and did not even publish it anywhere. But in his works corn bread is very often mentioned. Remember the Green Mile? And the corn bread with which the hero of Tom Hanks treated the black giant? And, for sure, this bread was prepared according to a traditional recipe, which is at a premium among all housewives in the southern American states. Ingredients:

Preparation: In advance, turn on the oven and place an empty thick frying pan in it (let them warm up). In the meantime, pour a tablespoon of flour into the bowl and fill it with boiling water (incomplete glass). Whipping with brewed brewed flour, add to it sour milk (yogurt, yogurt) and egg. In another bowl, mix the remaining flour, sugar, salt, soda and baking powder and pour all this into the liquid mixture. We knead the dough (a whisk or a fork, but not a mixer) until all the lumps are dissolved. We take out the frying pan from the oven and melt the butter on it. The oil is poured into the dough, and the remainder is greased with the entire frying pan. Once again, mix the dough and pour it into the mold. Bake for twenty or thirty minutes. Readiness of bread is determined by the golden crust and the moment when it starts to move away from the walls of the frying pan. Note: Spicy additives and fillings (red pepper, saffron, garlic, toasted smoked meat, cheese, etc.) are added to the dough only before it is poured into the mold. In general, corn flour is considered a dietary and useful product. It's not for nothing that the recipes of dishes from it are so "multinational". So do not pass by, when you see a package of corn flour on the counter of the supermarket. Try yourself in the role of culture researcher of ancient Aztecs, who not only loved corn, but also revered it, calling it their golden sun.

How to cook meatballs in a multivariate easily and simply?

Recipe for baked duck: all ingenious is simple

Omelette with milk: secrets of a useful evening snack