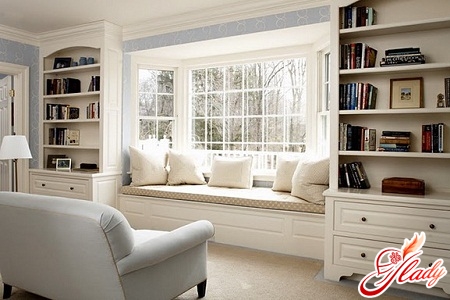 "Erker" - just so, in the "French manner" andI want to say this word. Although the very word "bay window" is German and in translation means "protrusion in the wall". Erker - architectural refinement, additional space in the room. Moreover, the space is rather small and not always functionally justified. Therefore, if you become the owner of such apartments, the design of a room with a bay window can cause some difficulties. How is it (this additional space) to equip, under what to adapt? And anyway, are there any rules on this matter, and how exactly to dispose of the room with a bay window? In fact, you are incredibly lucky. Because the bay window today is just at the peak of popularity. New-fashioned apartments are designed with bay windows, and the old apartments are equipped with bay windows, newly built, equipped with a loggia combined with the room. Still, there is something tempting-foreign in this that for the Russian person has an attractive, directly mystical power. So let's look at some ideas for a room with a bay window.

As a rule, it is semicircular or multifacetedprotrusion in the wall with a window. Outside, such an architectural element emphasizes the general appearance of the facade, creates the face and mood of the whole building. In German, this word still has a meaning "lantern", which is not surprising, given the similarity of the bay window, in the windows of which lights burn, with a lighted lantern. And invented (oddly enough) the bay window was not for decorating the facade of buildings, but especially to improve the interior. Firstly, it allows to achieve maximum natural lighting of the room, "expands" the walls and makes the whole room more light. Secondly, it creates an additional and even a special zone in the room or in the whole house. Thirdly, the bay window becomes a real landmark of your home. Well, in the end, you can adapt it to anything. It all depends on which room the bay window is in, from its area, the size and number of windows, and how light your design idea is. 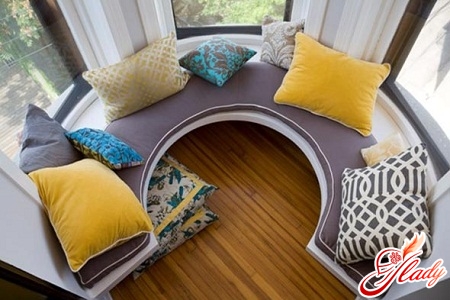 Rules for the design of the bay window

Such a special element of the layout of the premises andrelationship requires special. But this does not mean that the entire design of the room should be subject to the idea of ​​decorating the bay window. It can become a part of it - harmoniously inscribed in a common style and functional purpose. Or, on the contrary, it can be quite an independent room visually or completely "physically" isolated from the general space. If you want to make from the bay window an additional area justified by the purpose of the room, then use the style laws in which the entire room is framed. Place in the bay window that will complement the room functionally. If this is a kitchen, then the bay window can become a dining area, if the bedroom, then it can be turned into a quiet or passionate alcove. If the bay window is in the nursery, then from it you can make a game or training (working) area or mini-bedroom. If the bay window in your view should perform an auxiliary function, it can be "separated" from the room, for example, by a partition, screen or curtains. In any case, the bay window will require from you an independent design decision, which either emphasizes its generality with the entire room, or isolates from it.

How to use the bay window

Erker-cabinet will be obtained in the event that hesufficient area to accommodate (at least) a table and chair. In the best variant, shelves or a curbstone will also be placed here. Agree that enough light, a kind of privacy and view from the window can brighten any monotonous work. By the way, on working capacity, this will also have a positive effect. A beautiful dining area will be obtained in the room with a bay window, even if this room is not a kitchen, but, for example, a living room. The first option, of course, is more appropriate, but the mini-dining room in the living room is also not bad. Chairs or benches around the perimeter of the bay window, a table in the center, light curtains or blinds - here's a ready-made dining area. To emphasize the peculiarity of this room, you can make a small podium or place a bar-partition. Erker as a winter garden will completely triple any admirer of indoor plants. The wide and long windowsills will perfectly accommodate a collection of cacti or blooming violets, fuchsia, cyclamen. Flowers in suspended flowerpots will occupy a worthy place on the windows, and a multi-level podium or flower stands will be a good place for other green pets. Effectively, beautifully and comfortably (convenient for you and for the flowers). The erker-alcove will require from you, first of all, efforts on thermal insulation of windows - a sleeping place with so many windows risks becoming a draft zone. But, nevertheless, with the warming of windows and the correct selection of curtains, the bay window will be a good solution and will perfectly fit into the interior of a bedroom or a children's room. Actually, speaking, such a non-standard additional space in any room can be used worthy of use. Turn his corner of rest, placing there a soft sofa or a high podium with a lot of pillows and padded stools. Arrange in it a home theater or place audio equipment. Install a fountain or a large aquarium, in short, anything that seems appropriate in a room with a bay window. The main thing is to arrange everything correctly. 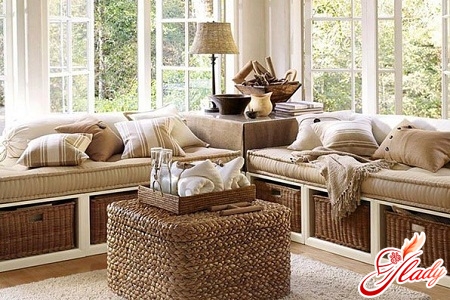 Design of the bay window

Difficulties in the design of the bay window can ariseonly with what to fill it, but how to arrange. Actually, in addition to the furniture that will be placed in the bay window, the interior attributes are also very important for its design: the same "clothing" that an ordinary ledge in the wall will turn into a real bay window. Clothing for the bay window is the curtains and curtains (blinds). The most convenient cornices for bay windows are the profile ones, which can be bent along the perimeter line of this room (an arc or a broken line). In addition, decorative cornices with a special articulated adapter perfectly fit on its windows. You can fix the cornices both on the wall and under the ceiling. In general, strict rules for decorating the windows of the bay window does not exist. It all depends on your tastes and the overall style of the room. So, for example, for a study or a winter garden you can hang on the window blinds. Heavy and dense curtains curtain the windows of an alcove or a home cinema, and light and transparent - a dining area or rest area. Laconic Roman or Japanese curtains will be an excellent alternative to blinds, if those, in turn, do not match the style of the room. In addition to curtains for decorating the bay window, designers are advised to use mirrors, paintings and panels, as well as interesting finishing materials and fabrics. In short, the room with a bay window design implies a diverse, but harmonious. Individual, but stylistic relevant. Functional, but aesthetically mature. It's a little thing to implement these rules. We advise you to read:

Forged beds - sophisticated romance in the interior of the bedroom

Selection of color in the interior. What do you need to know?

How to choose the curtains correctly?

What curtains to choose in the kitchen?

The combination of colors in the interior. How to choose the right color?

The combination of gray in the interior - original and stylish