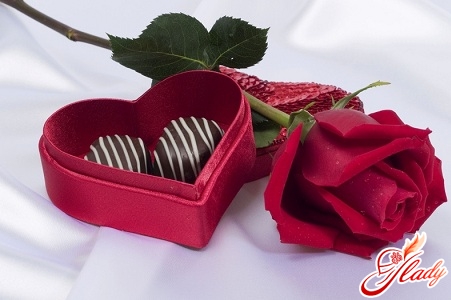 More recently in our country,celebrate a wonderful holiday - Valentine's Day. The history of this holiday has been several centuries. Probably everyone is used to the fact that this day is also called the Day of Lovers. But who is Valentine, and what does he have to do with love and lovers? Why on February 14? And why on this day it is customary to give each other little nice cards, made in the form of hearts - valentines?

Unfortunately, some details are no longer possibleto restore - it's been too many years. But it is known that Valentine is not a fictional character, but a real person who lived in the 3rd century AD in the Italian city of Terni. The Roman Empire was then ruled by Emperor Claudius II. There was a war with the Goths. Claudius was a brave and tough ruler. He did his best to restore calm and order in the state. Naturally, for this he needed a strong and efficient army. Above all other virtues, Claudius II valued military honor and valor. He tried in every possible way to strengthen the morale of the soldiers of his army.

Emperor Claudius was deeply convinced thatfamily life prevents legionnaires. Burdened by families, the soldiers tried to visit their homes as often as possible and worried about their loved ones. Claudius was not very sentimental. Therefore, he simply forbade Roman legionnaires to marry. However, it was not possible to forbid love to anyone. The soldiers fell in love and wanted to create families. 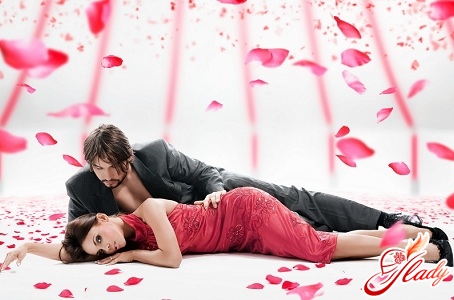 Valentin is a Christian healer anda clergyman. According to one version, he was a simple priest. On the other - the bishop of his hometown of Terni. However, its rank is not so important. What is important is that Valentin sincerely believed that love is a sacred feeling bestowed by God. And he, as he could, tried to help the lovers - he reconciled them with quarrels, helped legionaries write love notes and gave the flowers to the ladies from the soldiers. Despite the strictest prohibition of the emperor, he secretly crowned the lovers, helping them to find their happiness. Of course, this became known. When the Emperor Claudius was informed that the priest dared to violate his order, he ordered Valentine to be taken into custody and then executed.

The story that happened to Valentine in prison,not less romantic. When he learned that the prisoner was a well-known physician, one of the warders brought his blind daughter Julia to him. The more a young man treated a girl and prayed for her, the more he fell in love with her. But he could not heal. The night before the execution, on February 13, the priest wrote a touching letter to the girl with a confession, signing him: "Your Valentine." Julia received the note after his death. She unfolded the sheet, and then a miracle happened - a blind girl could read the written words. It is believed that with this note the history of "valentines" began. Later, Valentin was canonized. And later the day of his execution - February 14 - was declared Valentine's Day, and he himself - the patron saint of lovers.

The first surviving Valentine's DayConsider the note of the Duke of Orleans Charles to his wife. It was written in 1415. At that time, the duke was imprisoned in the Tower and, missing his wife, sent her short letters full of tenderness and love. One of these valentines has survived and is now in the British Museum. Already in the 18th century, postcards adorned with cupids and hearts became very popular in European countries. By the XIX century valentine became one of the most common ways of recognizing in love. For those who did not have a poetic talent, English publishers offered postcards with ready-made verses. Valentines of the Victorian era - a real work of art. They were released on expensive paper and decorated with silk, lace, flowers, satin and ribbons. By the middle of the century there were voluminous and even mechanical postcards. The cost of such valentines was quite high - not everyone in love could afford this luxury. By the end of the XIX century in the factories of Germany, the United States and England have established a mass production of valentines. Gradually, the fashion for expensive postcards began to pass. Now it is not necessary to buy a paper postcard, because there are electronic cards. Nevertheless, paper valentines are still very popular. After all, such a postcard can be held in hands, put on a nightstand or even put under a pillow. 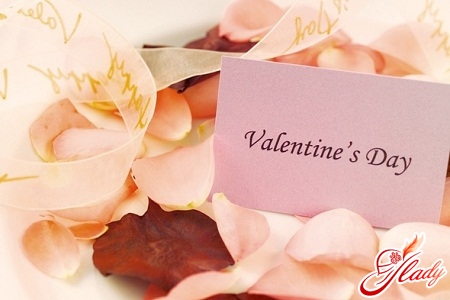 Symbols of the Day of Lovers

Love is a subtle and tender feeling. Sometimes it is very difficult to find the words to tell about it. Therefore, long before us, special signs and symbols were invented, by means of which we can confess without saying a word. In addition to traditional valentines, the symbols of love are gloves, rings, doves, hearts, laces and roses.

Perhaps, this is the brightest symbol of Saint's DayValentine. It is believed that it is the heart that is endowed with the ability to love. And if it stops, a person dies. To give someone a heart is to say that life without it does not make sense.

"I ask for your hand" - despite severalan outdated style, it seems that the meaning of this phrase is now understandable to everyone. And before noble ladies almost always wore gloves. Therefore, gloves and became a symbol of love and marriage.

Pigeons are considered the favorite birds of the goddess Venus. They never change their couple and "bring up" the chicks together. Pigeons have long become a kind of symbol of loyalty and love. It is interesting that in Africa "redbirds" are considered to be "birds of love".

Once upon a time, every lady must have hadimagine a lace handkerchief. If the handkerchief fell, the nearby gentleman was obliged to pick it up. Sometimes frivolous flirts used this little trick to make a nice acquaintance. Fast enough lace became associated with a love story.

This beautiful ancient flower became a symbolpassion thanks to the goddess Aphrodite. There is a legend that hurrying to a date with a loved one, she accidentally hurt her foot on a bush of roses. White flowers were painted with her divine blood and changed color.

The custom of exchanging rings at the betrothal and inThe time of the wedding ceremony exists in many countries. The ring - a vicious circle - symbolizes everything unchanged, stable, eternal. Such a gift speaks of the desire to be always next to your chosen one. Therefore, since the time of Ancient Rome, the ring is a symbol of love and marriage. Of course, it is not necessary to wait on February 14 to arrange a small holiday or to make a gift. After all, when you love, all the days become special. And in the heart of every lover lives Saint Valentine, whose story is a tale of love, for the sake of which it is worth living and not scared to die. But since almost the whole world celebrates Valentine's Day - why not join? We advise you to read:

A present for a girlfriend for her birthday: she is worthy of the best!

Gift for a wedding friend: the best alternative to the banal tea service

A gift to my mother on March 8

Gifts for February 14 with their own hands - it's easy