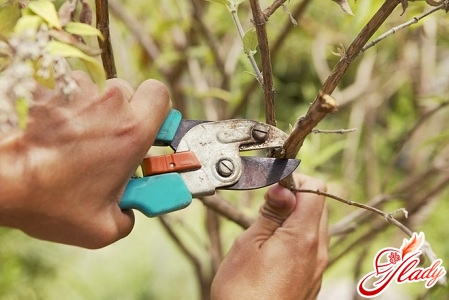 Pruning of fruit trees is one of thethe most important garden works carried out in early spring. This work does not take much time and effort, and the results of its overestimating it is difficult. Spring pruning of trees is not a momentary result, but a long-term work. Therefore, it can not be ignored - you still have to do this work, only pruning trees that were launched earlier will be much more difficult. Improper trimming of fruit trees or its absence can not only be bad for the fruit tree, but even destroy it at all. And the fruits of labor, which have been put a lot of time and effort for several years, will be ruined. Some believe that when pruning fruit trees it will be enough to remove dead or frozen branches. This, in fact, is very important, but the main goal of the spring pruning of fruit trees, both young and mature, is the correct formation of the crown of the fruit tree.

Formation of the crown of fruit trees

Formation of the crown is important to do regularly,starting from the moment of planting of seedlings. Then from the very beginning the trees will develop properly, and pruning will not cause any special trouble. Usually the crowns of fruit trees are spreading and have a large volume. At the same time, in the depth of the crown itself, the branches grow and expose themselves, and most of the foliage and ovaries, and, respectively, the fruit, shifts gradually to the edge of the crown and to its upper part. If the volume and shape of the fruit tree crown are not formed in a timely manner and the growth in the desired direction is not directed, then after a while the tree becomes tall, powerful and thickened. Such spontaneously growing fruit trees obscure the site, and, consequently, interfere with the development and growth of nearby plants. The fruits of these trees, as a rule, grow smaller, and sometimes become less brightly colored. Although, it must be admitted, their number can significantly increase. In increasing the number of fruits, too, there is nothing good, because most of them are still in an unripened form, crumbling, and harvesting the harvest is much more difficult because of the height of the tree. Moreover, the lifespan of trees with unformed crown, as a rule, significantly decreases, as they become often more weakened, and from this less resistant to diseases and pests. It also happens that uncircumcised trees with an unformed crown at a certain age can simply break up under the weight of the growing crown. Especially in the period of mass fruiting. This can lead not only to the death of the skeletal branches, but also to the complete loss of the tree. In addition, gradually, over time, care for such trees is significantly difficult, and causes serious trouble for the horticulturist. It is very difficult to spray the crown of such a tree, because it is almost impossible to process branches growing in all directions. Partial processing does not give the necessary efficiency. From spontaneously growing trees it is also difficult to harvest. This is possible only with the use of various devices and high stairs. But even in these cases a part of the crop remains on the tree. In order to remove these fruits, you need to shake the tree. As a result, the harvest is reduced not only quantitatively, but also qualitatively, and harvesting becomes a hard and tedious job. In addition, knocking fruit, it is possible by negligence to cause damage to the tree. 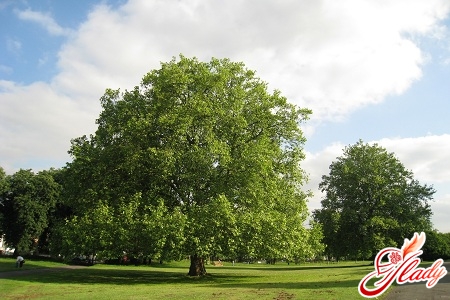 Whole cut only unnecessary branches,drowning the crown, as well as underdeveloped, rubbing, weaving, growing down or up, as well as broken and sick. The shortening is a stimulating technique, since it strengthens the development of the tree. Pruning trees, fruit and berry, is usually used for the initial formation of the crown of a young tree. They are pruned and pruned in the right place. This is especially often used to lay a new tier of branches. With the help of pruning fruit trees, fouling is enhanced. In addition, thus prevent the swelling of the fruit trees. The shortening is used to change the direction of growth of the branches. In adult trees with a strong growth, trimming helps limit the size of the crown and keep it within the required volume. Shortening shoots on aging fruit trees leads to a rejuvenation of the tree, increasing its growth and the formation of young shoots. Trimming is also used in the case of the freezing of the crown in winter, to restore it. It should be borne in mind that you can not use pruning fruit trees of those varieties that are characterized by a strong and very strong ability of budding and awakening of the kidneys, because it causes thickening of the crown of the fruit tree. At the optimal length of growth of the main branches and the conductor (the main trunk), too, there is no need to trim. This can lead to negative consequences, for example, to a decrease in yield, because fruiting mainly occurs at the ends of young shoots. 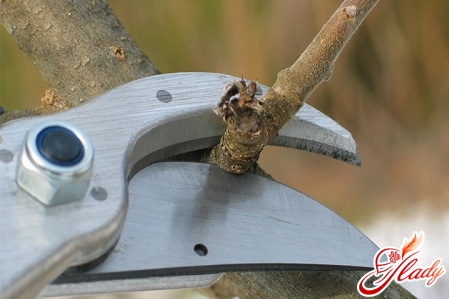 How to trim trees

When trimming less than a third of the branch, shorteningcalled weak, from one third to one half - medium, and more than half - strong. Sections are made on the kidney, which is located on the outside of the branch. Strong branches are shortened when shortened above the lateral branch, oriented in the right direction (trimming to translation). If the branches are less than three centimeters in diameter, the cuts are made by a secateur, while the thicker branches are cut with a saw. When pruning fruit trees with a pruner, it must be guided across the fabric, avoiding distortions and twists. The cut is made so that its ending was slightly higher than the tip of the kidney. Cutting the whole branches, it is necessary to make a cut at the base along the ringed influx. Very large branches are removed in parts. First mark the place of the saw, and then at a distance of ten to thirty centimeters from it (this depends on the width and length of the branch) make the bottom drink. Need to saw, while the saw does not jam. After this, you must retreat three to five centimeters, and make a second wash down. Then in this place the branch breaks off. After the branch is removed from the crown, the remaining stump should be cut in the right place. And you need to do this carefully, so as not to get scorched bark. Spila less than one - one and a half centimeters can not cover and do not paint over. In young trees, they grow well themselves, and on old trees they are found mainly on the periphery of the crown, which is not dangerous even in the case of weak and slow overgrowth. Large wounds, especially on the main skeleton-forming branches and the main trunk, must first be cleaned, cut off the scuffs of the bark, and then properly paint over them or cover them up. To cover up wounds it is possible garden hive, and to paint over - any paint on the basis of natural drying oil. Applying protection to the "wound" should be no later than two hours after the cut. If the wound is not yet overgrown, and the paint or putty have worn off, it is necessary to apply them again. There are various systems for the formation of the crown of fruit trees, among which the most common is the thin-tiered crown. In this case, a tier of two adjacent or adjacent skeletal branches is made at the bottom, and a third is left at a distance of fifteen to thirty centimeters. It is permissible to make a tier of three branches. The remaining branches are placed around the trunk singly or create a second tier of two branches and one or two more ones one at a time. The distance between the tiers in the middle zone for varieties with a wide crown is set at 0.6-0.8 meters, and for varieties with an elevated crown 0.8-1 m. As the skeletal branches choose those that are evenly located along the circumference of the crown at an angle of 45-70 ° to the main trunk. Optimal angles of divergence between skeletal branches are approximately 120 °. Skeletal branches of the second order should be laid only on the three lower branches. And there should be no more than two on each branch. The branches of the second order form as much as the first one. The first branches on the main branches should be located more than 0.5-0.6 m from their base. This method of shaping the crown makes it easy to achieve the desired result and get a long and well-fruitful tree. According to those people, for whom the main hobby is gardening, the pruning of fruit trees should be carried out before budding. It should be guided by specific weather conditions. But pruning is usually done no later than mid-April. If we talk about the sequence of pruning, then first of all it is necessary to process berry bushes, because the buds on them begin to swell very early, and the leaves peck almost immediately after the snow falls. Then, young and fruit-bearing trees are cut off - pears and apple trees, well, and then stone fruit crops - cherry, cherry, plum, etc.

How to clean gold at home?

How to choose an air humidifier for your home

Where to put old things?

How to wash blinds?