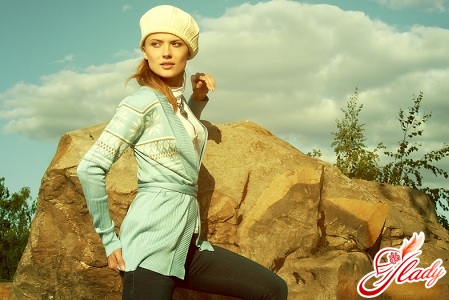 Beret - universal headdress. Wear it kids and adults, rich and poor, military and civil. They also wear beret at any time of the year, and it never goes out of fashion. Berets are sewn from fur and drape, from leather and felt, knit and crocheted. And, among other things, a knitted beret can become a pride of fans of hand maid, and the task of knitting beret with a crochet can be mastered by both an aspiring needlewoman and an experienced craftsman. And why? But because the knitted beret - a fairly simple design. What is it like and how to translate it into reality? Let's find out.

Beret remains the most popular among womenheaddress. A knitted beret - especially, because how to tie it with crochet or knitting needles is very simple. Regardless of the style, any beret consists of several parts, and its knitting (unlike sewing) does not need to be accompanied by a special pattern.

Details of the beret can be made composite, it can beknit with a single-sided fabric with one suture or knit in a circle. The style of this headgear depends only on two points. First, it is determined by the presence and size of the straight middle, and secondly, depends on whether the beret is "sitting" on the rim, or whether it has a straight edge without an additional bar. The appearance of the crocheted beret is determined not only by the shape, but also by the quality (kind) of the yarn, the density of your knitting, and the chosen pattern. Crochet knit delicate summer berets made of thin cotton or silk threads. For the demi-season variant, yarn of medium thickness, openwork or dense knitting patterns is chosen. Warm berets are knitted from wool, down and mohair. Very often berets are decorated with knitted flowers, brooches or other decorative elements. The main condition for flawless products crocheted is the matching of the thickness of the yarn to the size of the hook. So, if you have the desire and time, you can make your own man-made masterpiece. And mind you, it will not require special skill from you: only accuracy, imagination and patience. 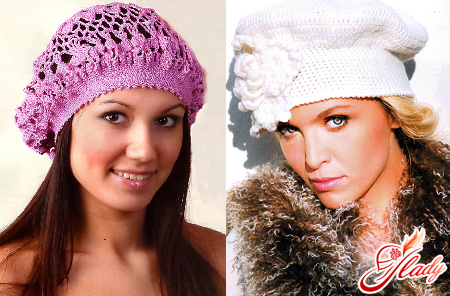 The simplest of all models, which is worthbegin to inexperienced needlewomen. For her, you need a small hank of any yarn for hand knitting and a third number hook. Knit such takes in a circle, starting from the top and making the traditional addition of loops. The size of the circle (its diameter) depends on the size of the beret, and its shape from the different number and location of the added loops. The addition of loops starts from the second circle, having connected initially the chain of air loops and closing it into a ring. For ordinary dense knots, the wedge scheme is used in which two loops are cut out from one increment in each row, and the remaining loops are tied with posts. In this way, you can add loops only on one edge of each wedge. If in the process of work (by tying about five rows) you notice that the edge of the circle begins to go by waves (falsify), then reduce the number of wedges and loops in the first row. If the edge of the bottom begins to shrink and collapse, then increase the number of segments and columns in the first row. By tying the bottom of the beret with a diameter of twenty-six to twenty-eight centimeters, start knitting the middle of the canvas without adding. It is here that you can use any decorative pattern or combine the color of yarn. By tying a canvas about six centimeters high, begin the reduction of the loops, tying the extreme loops of the wedges (one edge) together. For example, if the width of each wedge is sixteen loops, then in the first row knit together 15 and 16 loop, in the second circle - 15 and 14, in the third - 14 and 13. And so on, until you reach the desired diameter beret. For the rim, tie a strip about two centimeters wide by loops without adding or subtracting, alternating the columns without the crochet with the "walking step".

A warm hat means usingthick, fairly thick and warm yarn. Although, for example, downy yarn with its lightness and minimum thickness of the thread is very warm, even in lacework articles. And yet, winter knit takes best some simple pattern. In the case of crochet - columns without a crochet or columns with a crochet. For a more interesting appearance of this beret, you can take melange yarn or yarn of a special texture - boucle or "grass". In any case, you need about one hundred and fifty grams not the thickest, but not thin yarn and the sixth hook. Start knitting from the top and continue it in a circle. First, draw a chain of three air loops and close it in the ring. Then knit in the following sequence.

Fasten and cut the thread. Ready to take a wash or just slightly moisturize and allow it to dry. Decorate beret on your own. And in addition to it from the same yarn tie a scarf and mittens (or gloves). 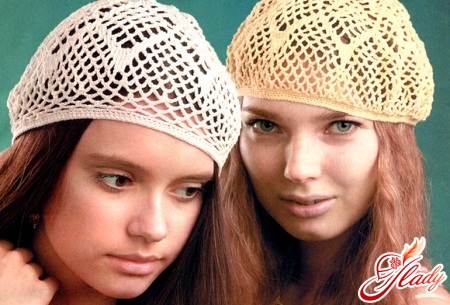 How to decorate a beret

If crocheting is your hobby, and you are already inthis is enough podnatore, then try to tie the delicate beret. Use for this any pattern you like, or even swing on a beret, executed in the technique of freeforms. If, however, crochet is not yet your horse, then tie it with simple stitches without a crochet, for example, from melange yarn. Such a headgear, as a rule, does not need additional decorations. If you tied a single-colored beret, then decorate it with additional ornaments, also crocheted. By the way, knitting such details often becomes an interesting hobby. It can be, for example, a large flower or even a bouquet of flowers. It can be knitted berries (a branch with cherries, for example). Beret can be decorated with flowers, woven from beads or embroider with beads. The elegant decoration of a crocheted beret will be embroidered with ribbons. And given the texture and density of a crocheted fabric suitable for such embroidery, you can easily cope with this task. In the end, just buy or make yourself a suitable brooch. Crochet is considered a very simple technique. In any case, this knitting is recommended for beginner needlewomen. In addition, crochet - a universal technique in which almost any clothing is made, from swimsuits and finishing coats. A small and stylish hat, fashionable at all times and suitable for ladies of any age - an excellent opportunity to master this simple, but very effective technique. Dare! And all at you will turn out. We advise you to read:

Men's claims to the women's wardrobe

Lower lingerie 2016: an intimate detail of the female image